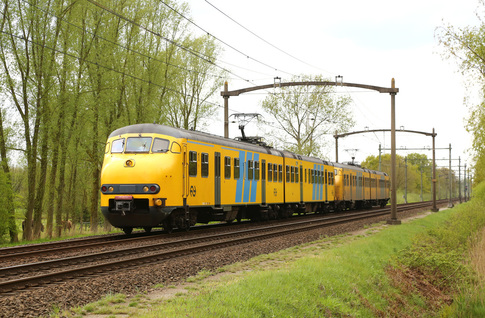 Between the 27th April and 2nd May 2015 I visited The Netherlands for a week, and also visited parts of Belgium on route to and from the Eurotunnel terminal at Calais.
The week in Holland was centred around the Breda - Tilberg - Rotterdam area. Our visit to The Netherlands coincided with the closure of the Betuweroute (the new double track high speed freight line linking Rotterdam Docks with the Germany). This resulted in rail freight being transferred back onto its former route using the Tilberg/ Eindhoven mainline, making this particular line incredibly busy with rail freight between the normal passenger services. Our trip was not planned coincide with the closure but we were exceptionally lucky with our timing of the trip.  We also visited the fascinating city of Rotterdam, using the high speed rail line between Breda and Rotterdam. The purpose of the trip was to view the sights of the city and capture the extensive city tram system. Rotterdam is a city of unique Architecture and provided some stunning backdrops to some of the images we took.

The first day of our trip started at 02:30 in the morning for an overnight drive to Eurotunnel at Folkstone. As part of the trip we booked return tickets on Eurotunnel. An early arrival at the Eurotunnel Terminal allowed us to book onto an earlier service through the tunnel to Calais. France was merely used as a transit country before calling off in Belgium on route to the Netherlands.
Our first port of call was at De Panne (Adinkerke) where we followed the Belgian Coast Tram which operates along a 68km coastal route between De Panne to Oosende and onto Knokke, located near the Dutch border. The line is built at meter gauge and runs from 600V overhead electric. There are 69 stops along the length of the line with tram intervals of between 15-20 minutes in each direction, along with connections to Mainline Belgian Stations at De Panne, Oostende, De Haan, Blackenberg and Knokke. We followed the unique coastal tram line to Oostende before taking time out for lunch and visiting the Mainline NMBS Station (which is currently undergoing a huge refurbishment/ renovation).  From Oostende we traveled to Antwerpen Noorderdokken station where we spent a short amount of time before continuing the final 25km to our hotel in Breda (The Netherlands). 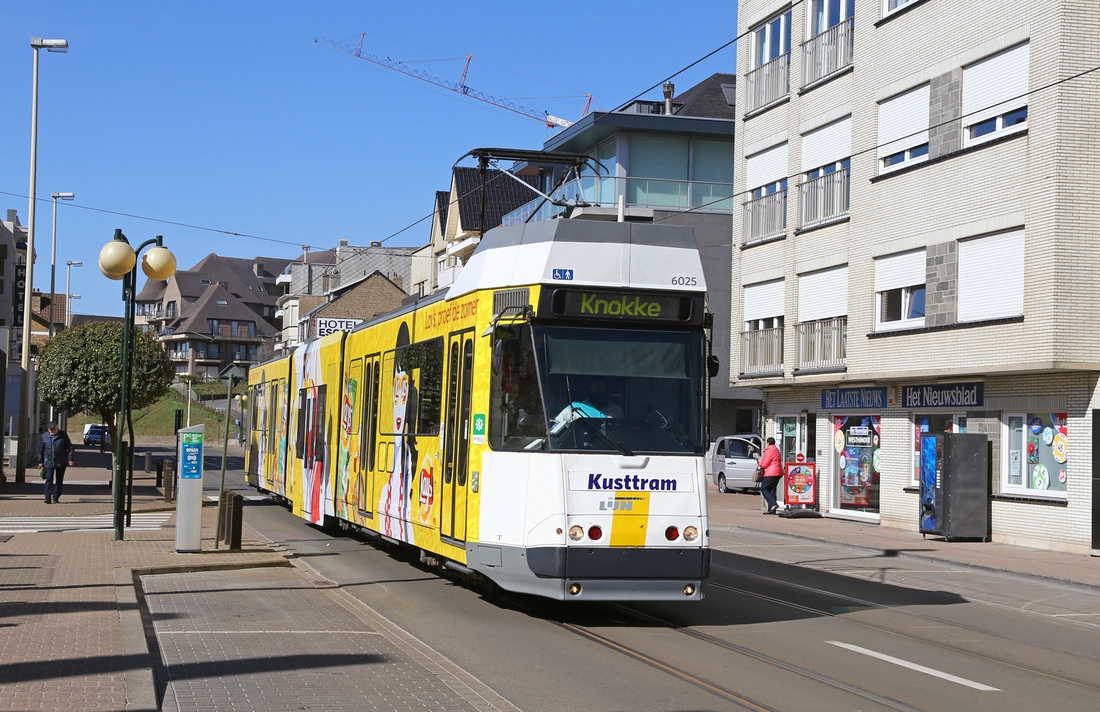 Many of the trams on the Kusttram (Coast Tram) route carry advertising. No.6025 passes De Panne Esplanande with advertising for Lay's Crisps on the side.
Under the shadow of the Oostende Cathedral Class 77 No.7743 'Iris' stands within the new station canopy structure at Oostende. 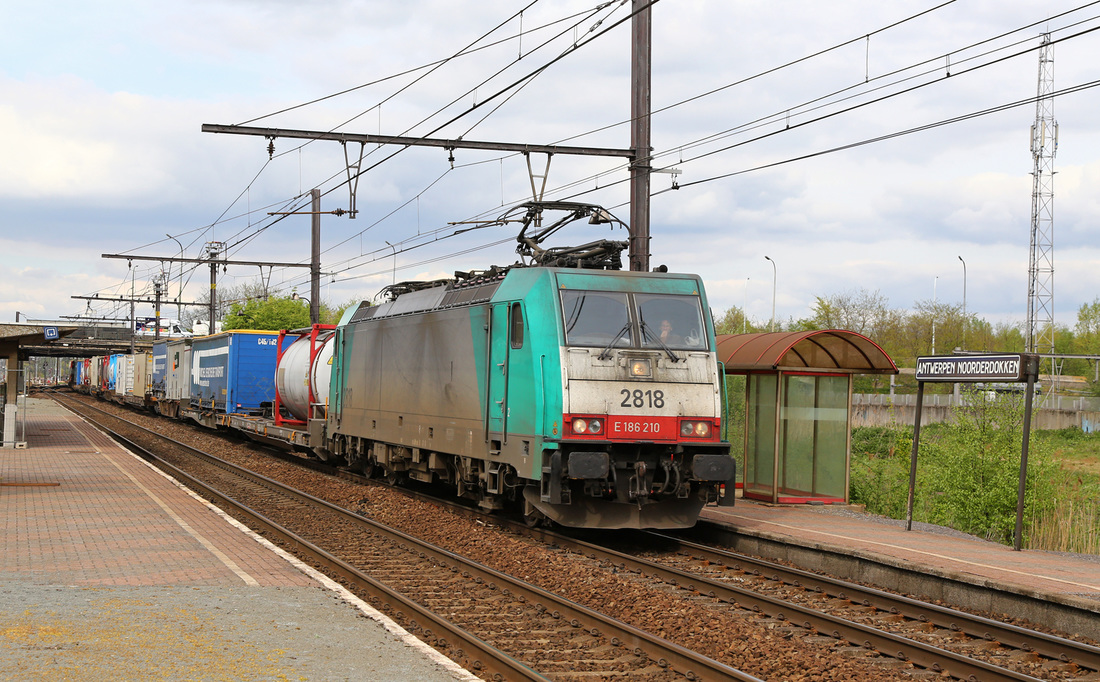 Belgian Railways Class 186 No. 186210 passes through Antwerpen Noorderdokken Station with an intermodal from Antwerpen Docks.
Belgian Railways AM75 units are all showing their age with huge amounts of graffiti on every train we saw. A selection of units and services operating between Roosendaal (Holland) and Antwerpen are featured in the images above. Their replacement by new build Siemens Class 08 EMU's is immanent and very much needed, no matter how bright and vibrant the Belgian street art scene is, no railway operator should be operating units like this in such poor external condition. 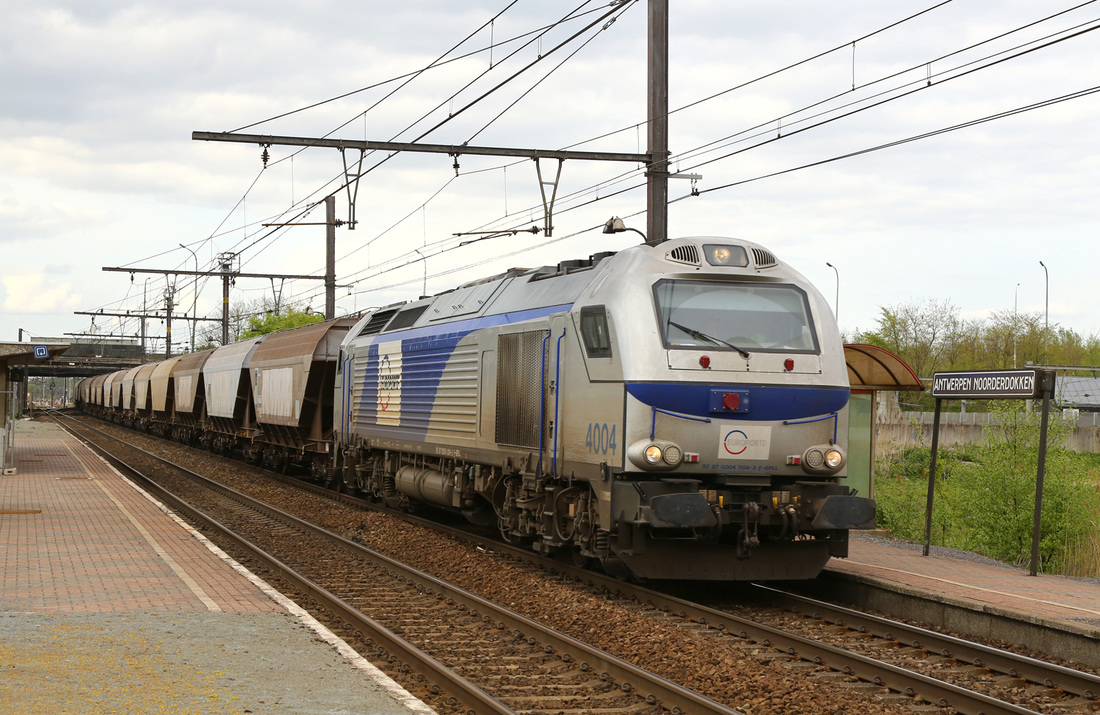 Vossloh Euro 4000 No.4004 operated by Europorte (the same group who owns GBRf in the UK) passes through Antwerpen Noorderdokken Station having used the Noorderdokken Yard balloon track to turn change direction. It's thought this service was possibly the Payron-Rupel Boom to Moeskroen (France).

DB Class 6500 No.6439 rounds the curve at Breda Prinsenbeek with a freightliner from Rotterdam Docks heading west towards Venlo. 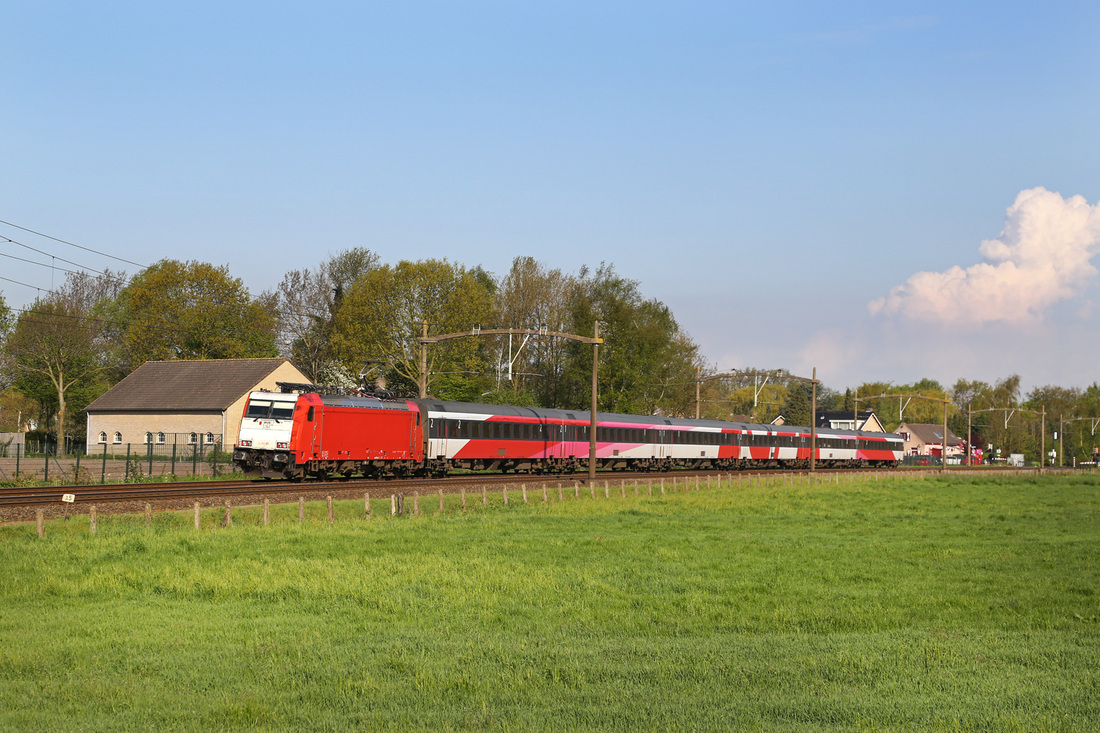 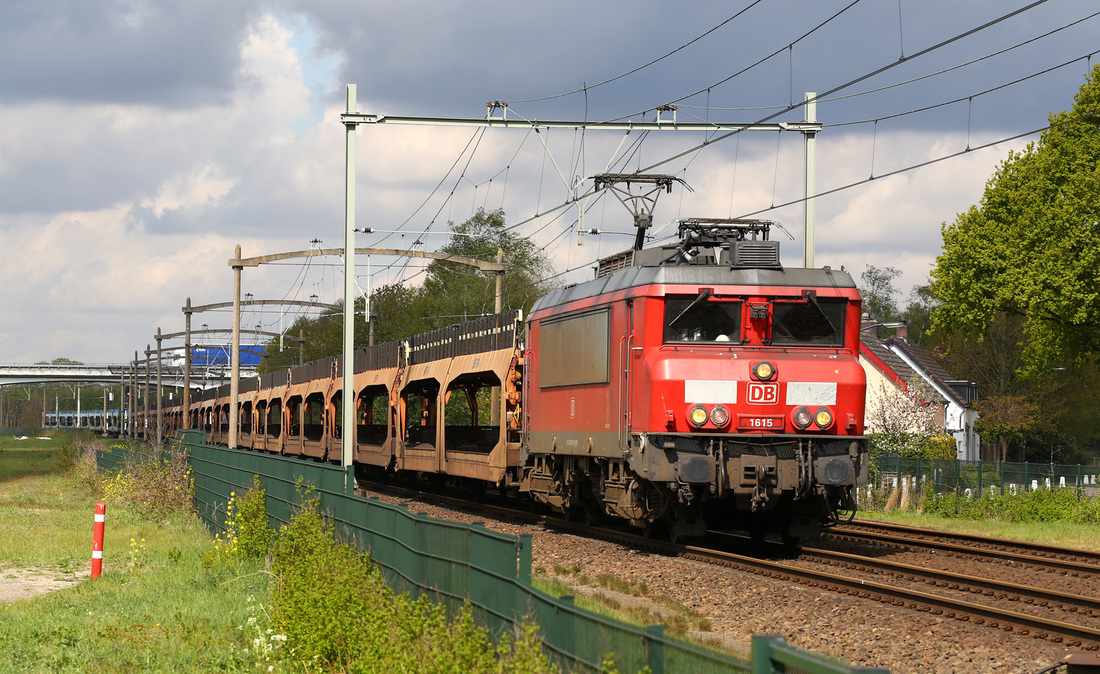 Class 1600 No.1615 is now operated by DB, the loco is seen passing Baarschotsestraat near Dorst with a train of empty cartics returning to Germany. 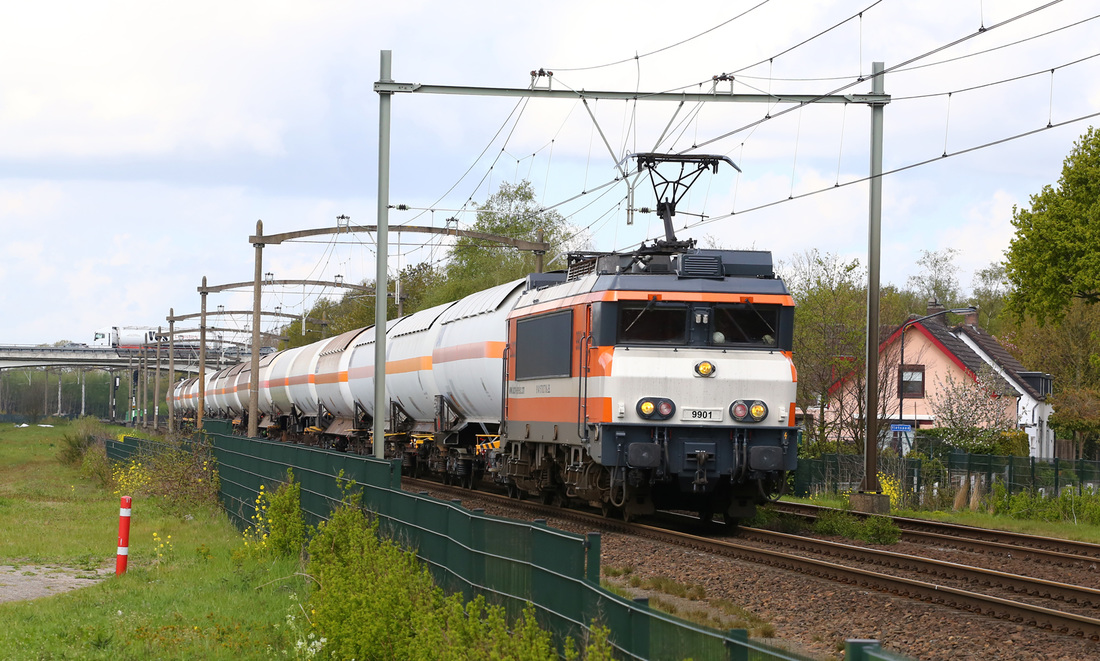 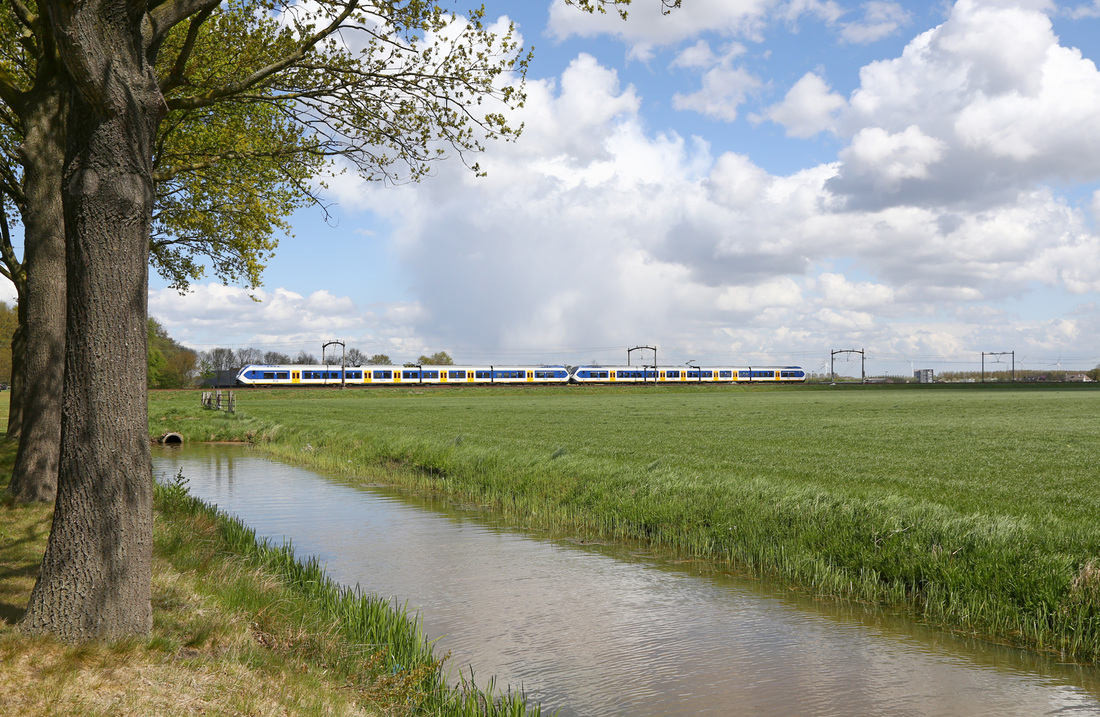 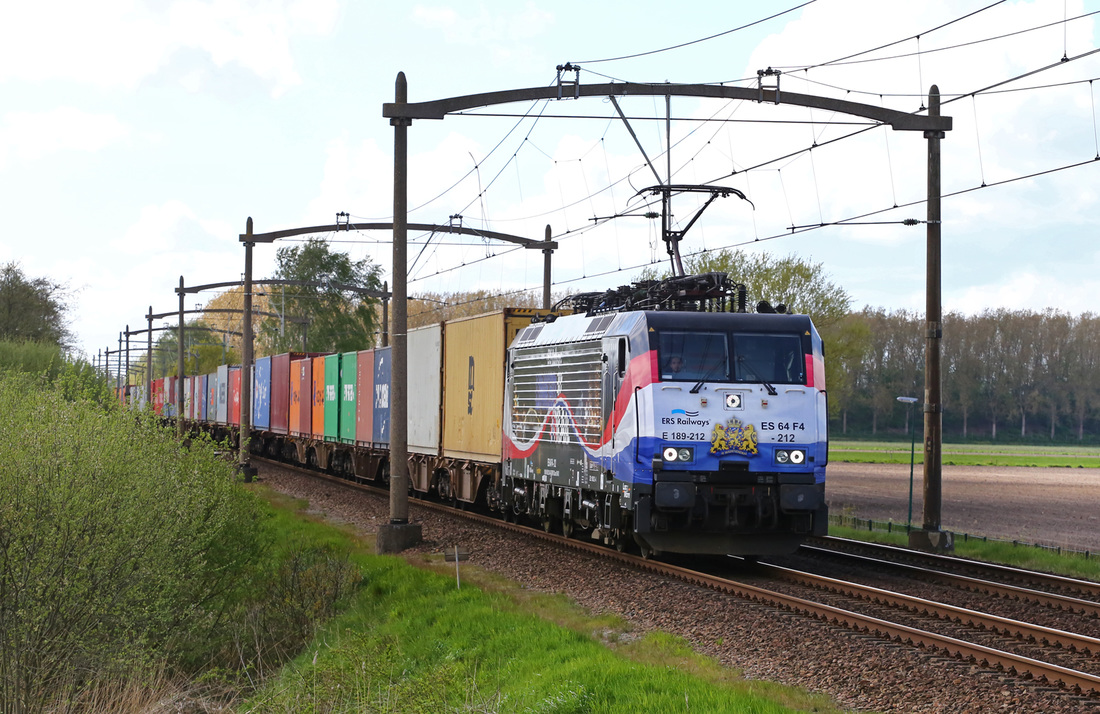 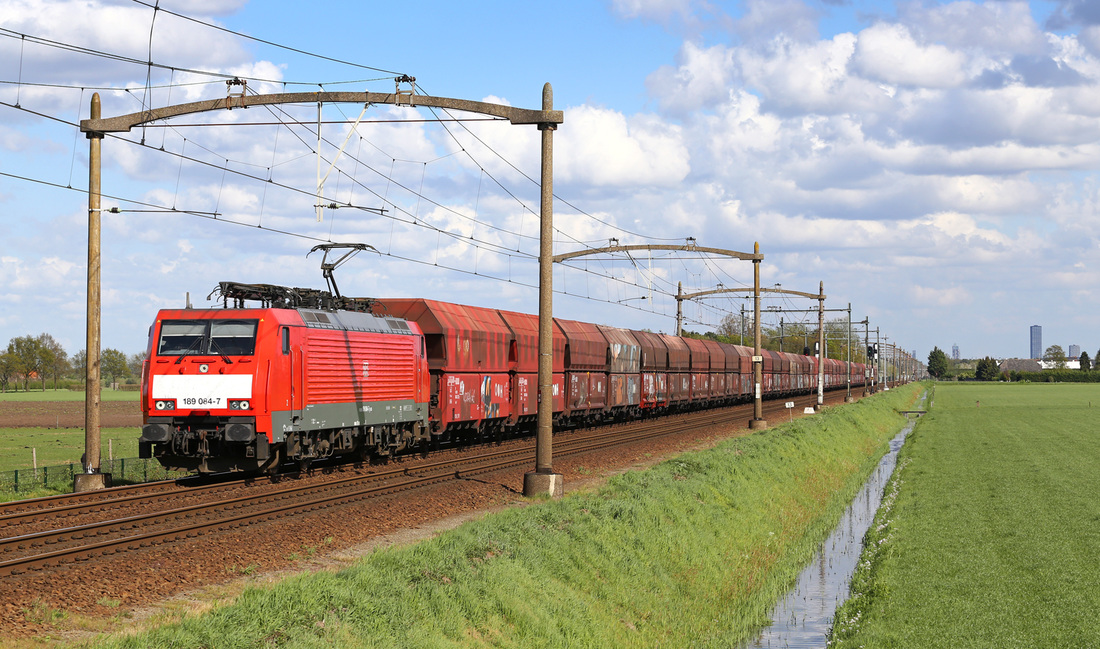 DB Class 189 No. 189084 passes Gilze Rijen with an empty coal train from Germany heading for loading.

For the third day of our visit we started the morning period by driving out to Gilze Rijen, this time at a new location about a quarter of a mile from the previous days location. This gave better views of traffic heading eastbound towards Eindhoven. At around mid day we then moved to the oposite side of Tilberg to a small town called Oisterwijk. The station also contained a quaint railway cafe, after a break for lunch we proceeded out into the countryside finding a quiet location on a cycleway near Boxel located close to adjacent woodland close to a cylce path in a wooded area.
During the late afternoon, poor weather closed in before rain arrived at around 18:00. 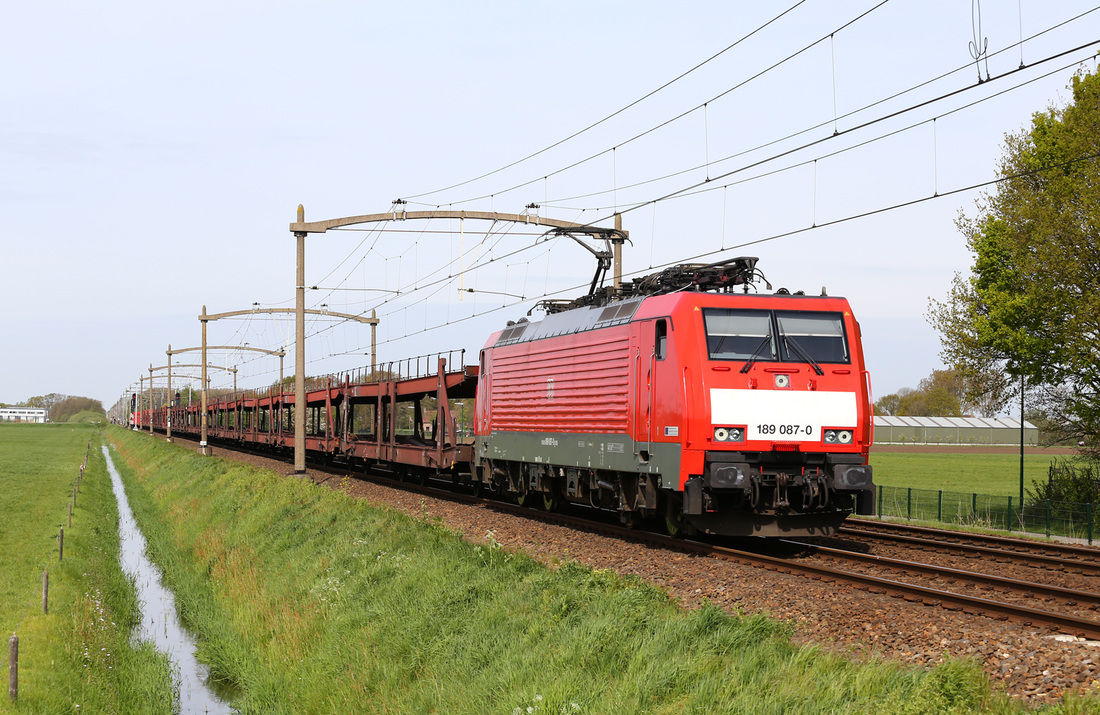 DB Class 189 No.189087 passes Gilze Rijen with an empty train of cartic wagons returning to Germany from Rotterdam. 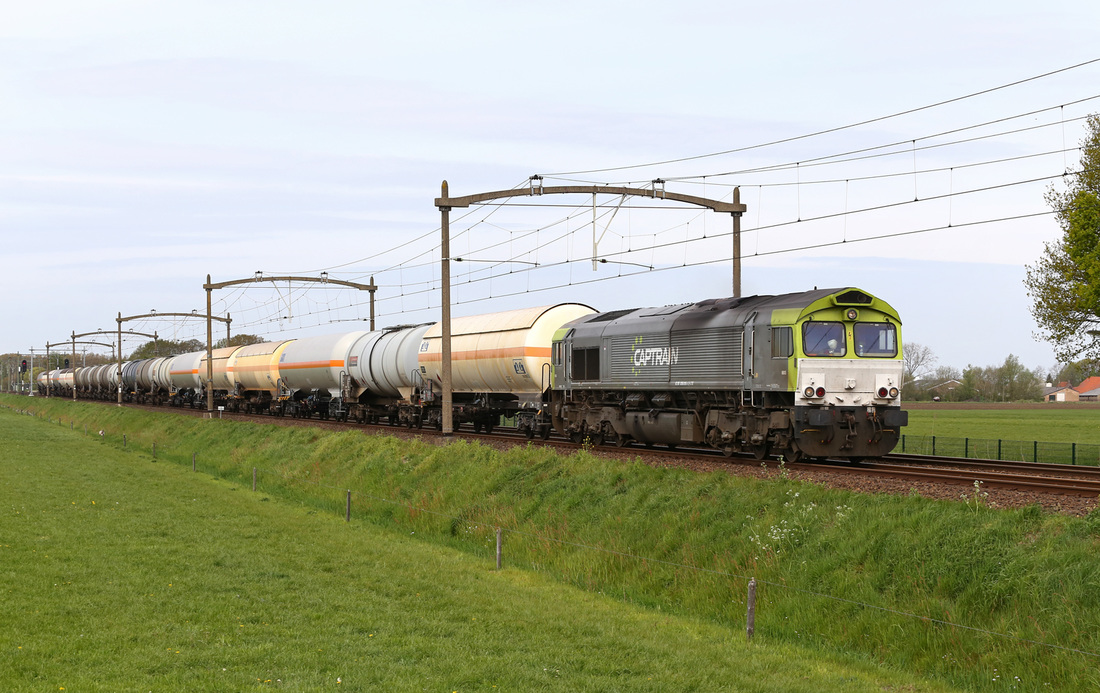 Captrain Class 66 No.6605 (PB11) passes Gilze Rijen with a second trainload of chemical tanks in tow, most probably originating from the same location as the previous Captrain service just minutes before. 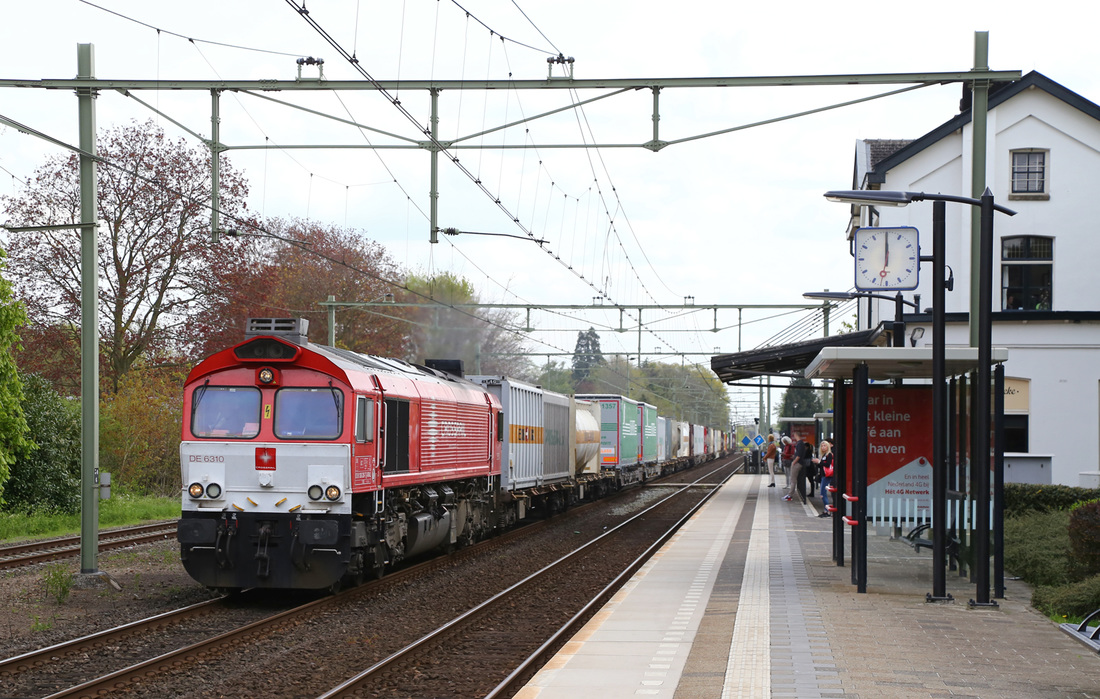 Crossrail liveried Class 66 No.DE6310 powers through Oisterwijk Station at dead on 12:00 heading for a Belgian Port. 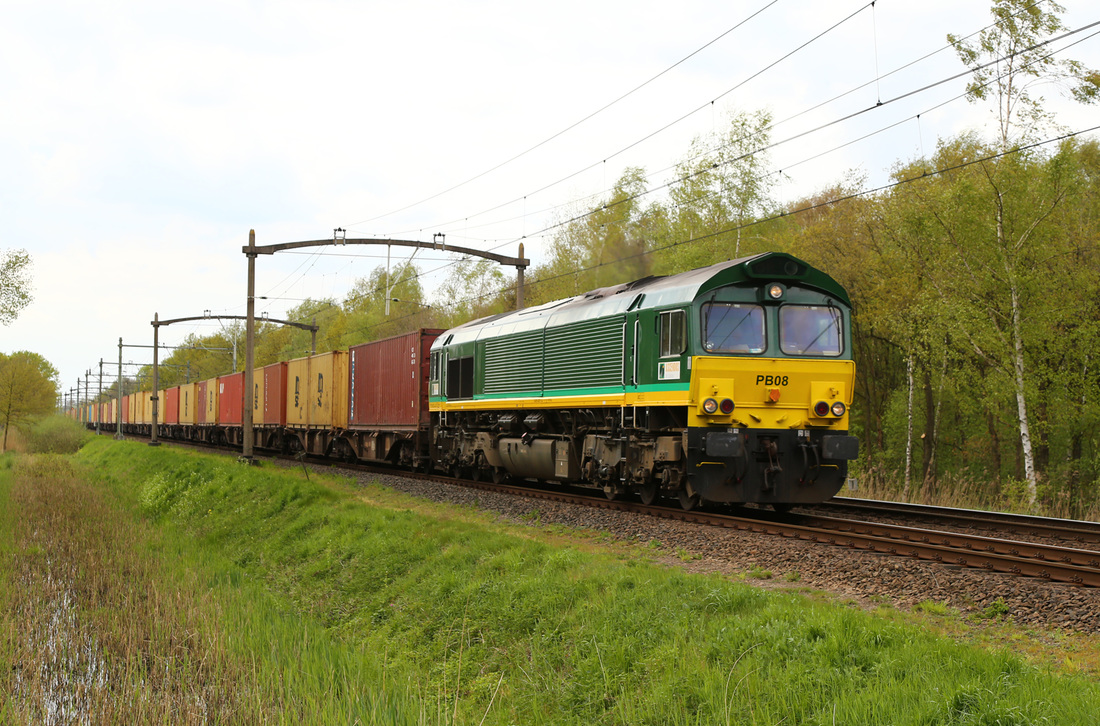 Euro Class 66 No.66602 (PB08) is owned by Ascendos Rail Leasing, and is seen passing Harren on route towards Gerrmany. 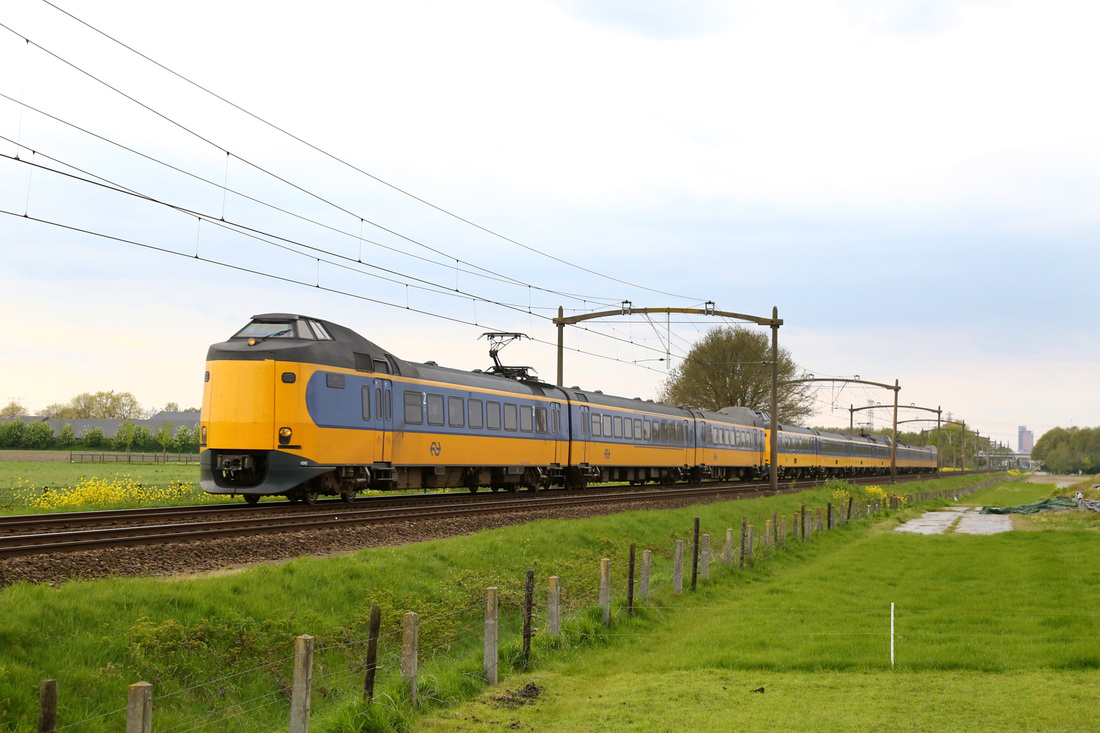 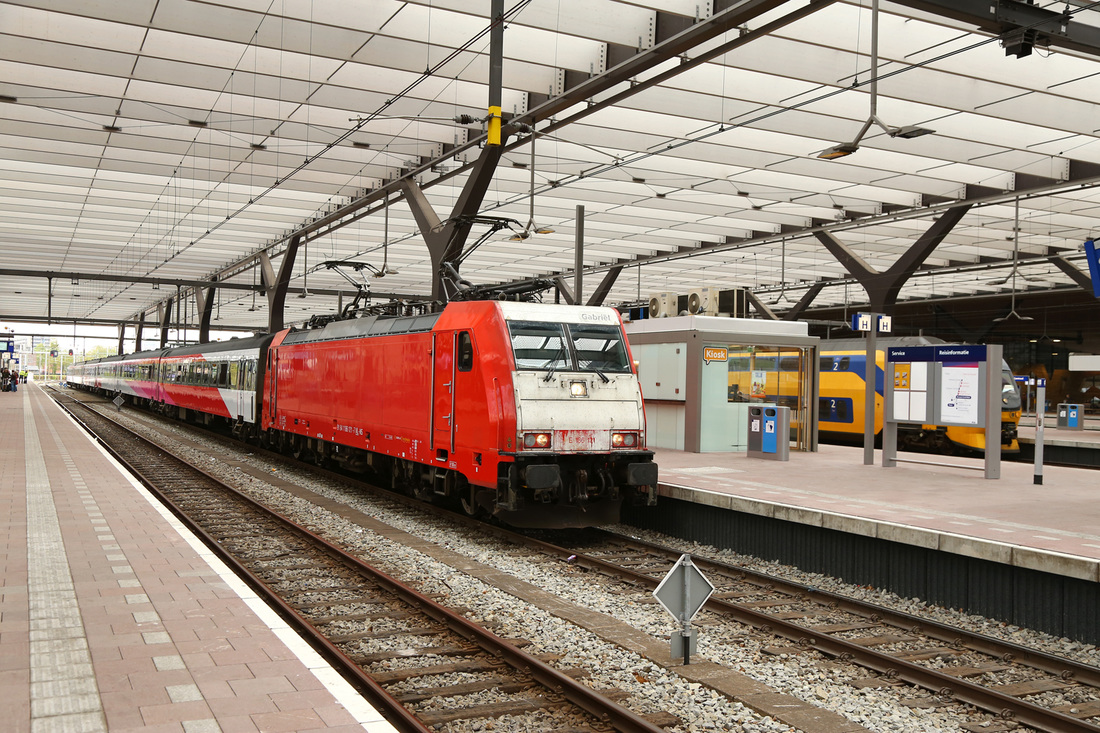 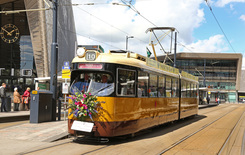 Rotterdamse Elektrische Tram (RET) is the main public transport operator in Rotterdam. The company operates 35 bus routes and 11 tram lines. Integrated ticketing allows passengers to use the OV Chipkaart to 'touch in and touch out' travel on any Bus, Tram or Metro around the city. A day ticket for Rotterdam costs just 7.50 Euros (about £5). The Rotterdam Tram network covers some 75km, and uses a fleet of 113 Altsom Citidas Trams (which is the biggest Citidas Fleet in the world). However the city hasn't lost it's heritage roots. There have been trams operating in Rotterdam since 1905 and during the summer months (and special occasions) Heritage Trams can be found operating in the city on route 10.
The only disadvantage with the Rotterdam Tram system is that RET do not produce a  London Underground style 'map' of their network for tourists to use. A map can be obtained from the tourist information centre at Rotterdam Central Station, however it took some studying to understand the routes and lines (even for those people familiar with travelling on public transport it was somewhat confusing), so could be a little daunting if you had never been in the city before. That said if you did go wrong (and we did), it's simple enough to jump off on tram and back onto another within minutes. There are some great architectural sights to see in Rotterdam, and the Tram/ Metro offer the best way to travel around and enjoy the city. 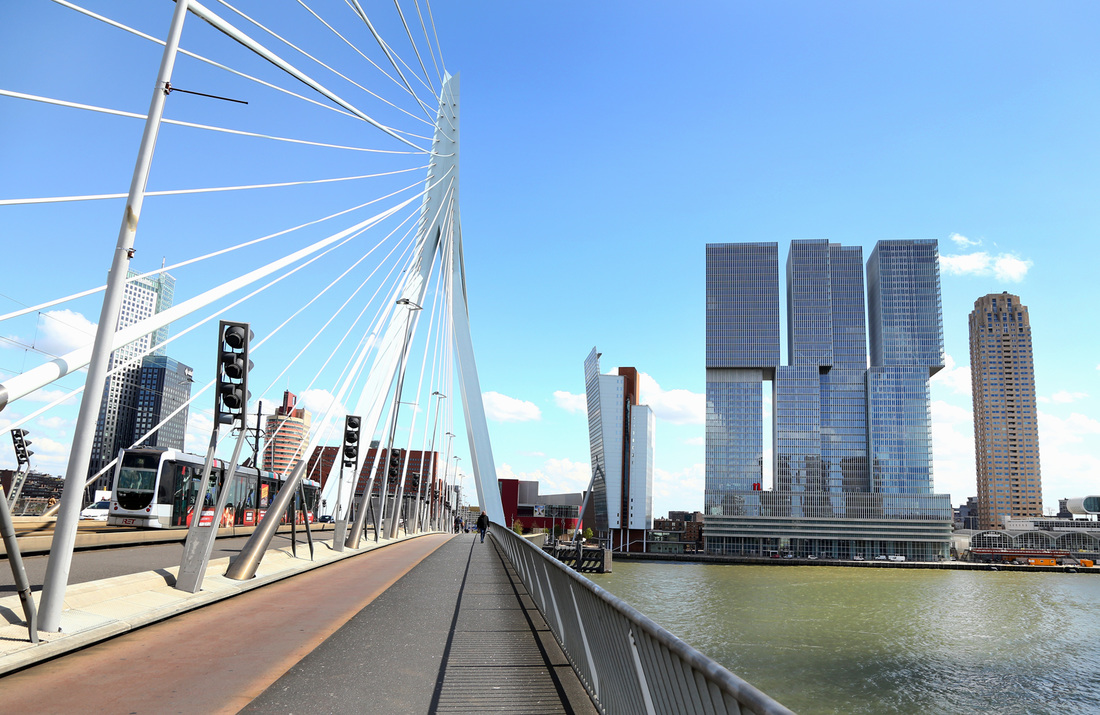 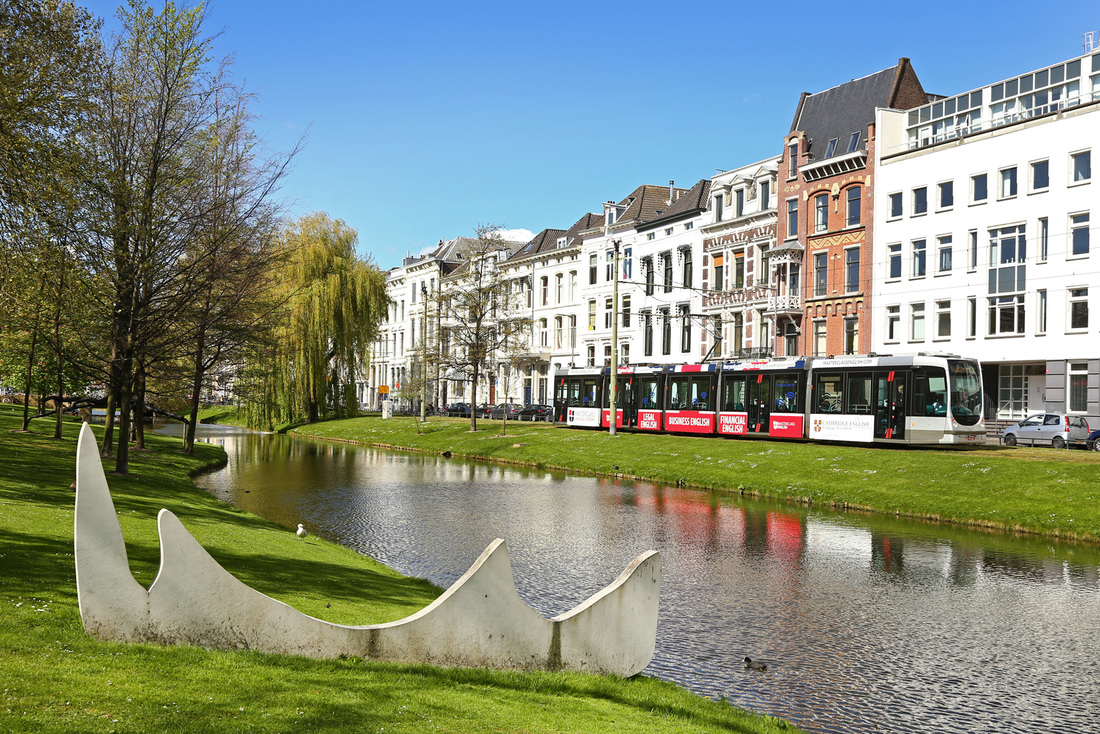 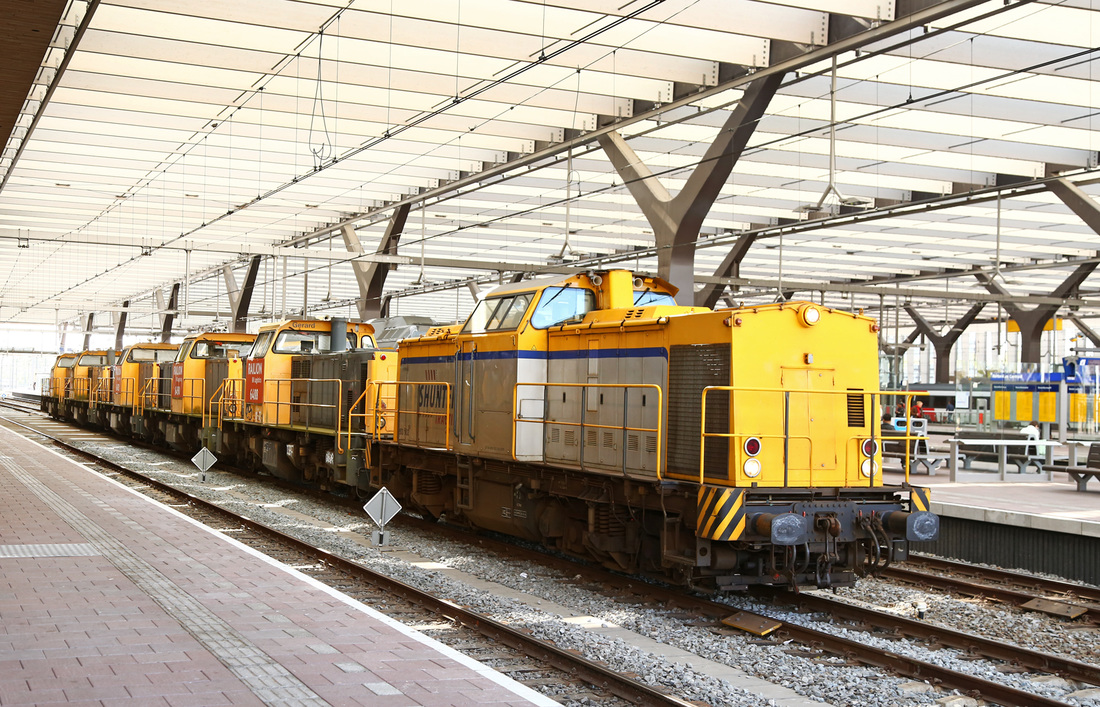 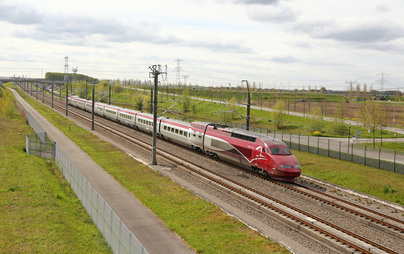 Day five would be our last full day in The Netherlands before returning to the UK on the Saturday. Our first port of call was to Lage Zwaluwe, located just to the north of Breda at the point where the Belgian mainline links in from Roosedaal. Lage Zwalwe is provides good views of the adjacent high speed line, and provides a chance to view TGV Thalys services operating at top speed. The morning period was spent at Lage Zwaluwe before we moved east to spend the afternoon in the Gilze Rijen area. The increased freight activity and the promise of good weather also saw an International crowd of enthusiasts gather at Gilze Rijen, the impromtu gathering included Dutch, Belgian and English spending the afternoon enjoying the additional increase in traffic on the Tilberg mainline. 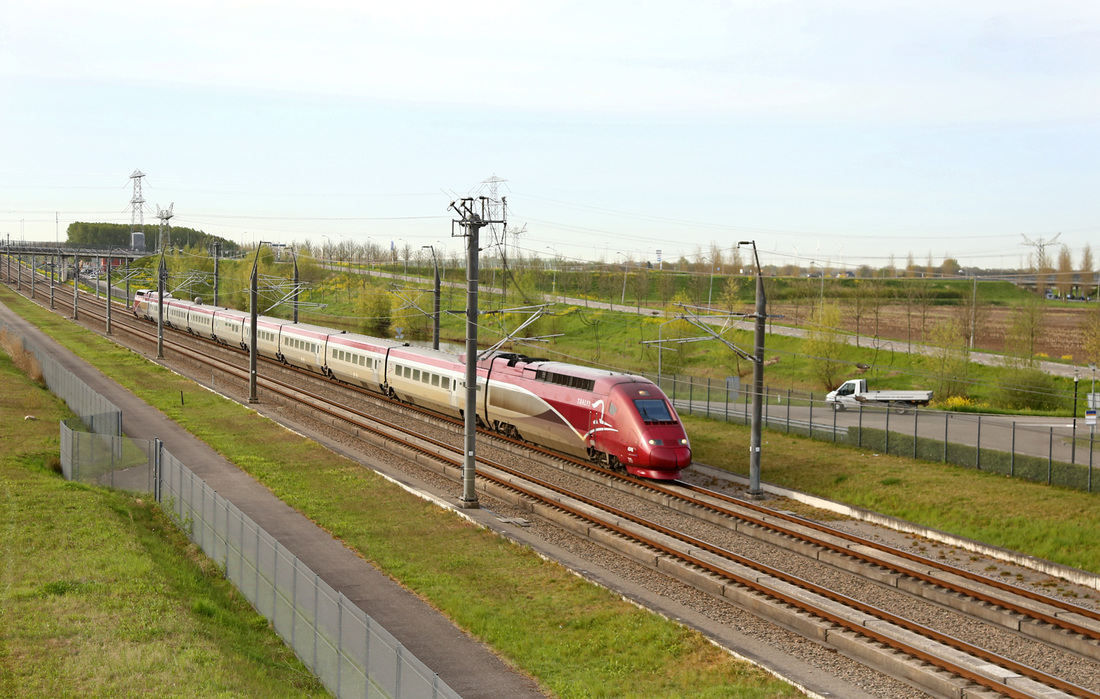 TGV No.4346 speeds through Lage Zwaluwe with the 06:22 Paris Nord to Amsterdam service. 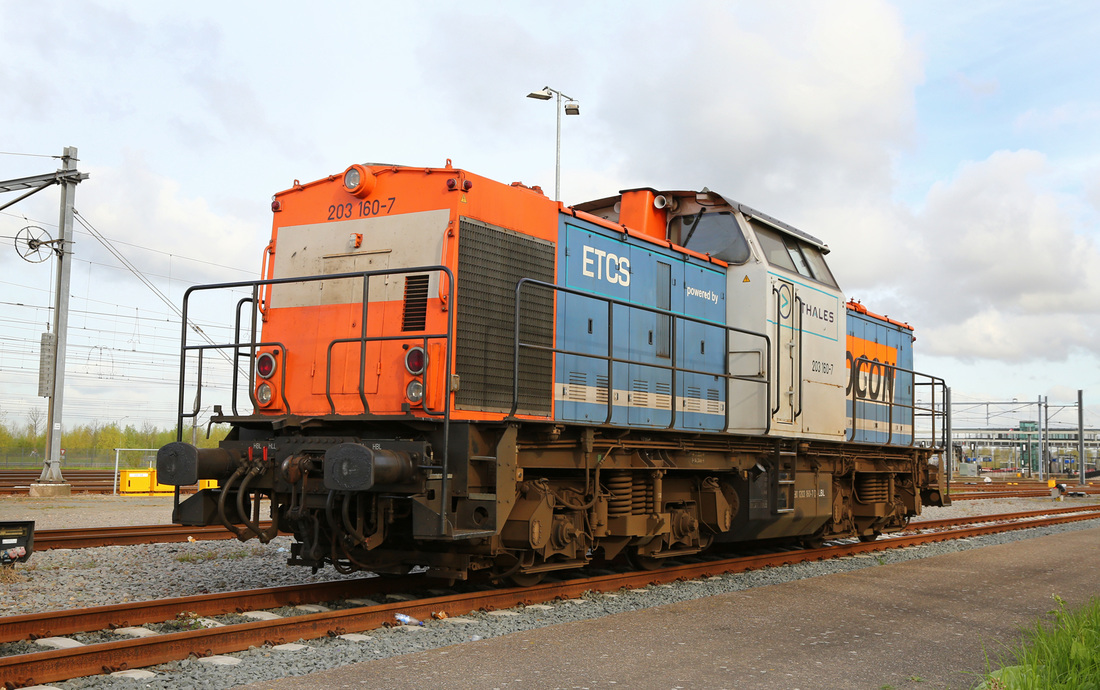 Ex German No.203160 is pictured stabled at Lage Zwaluwe and is operated by Locon. 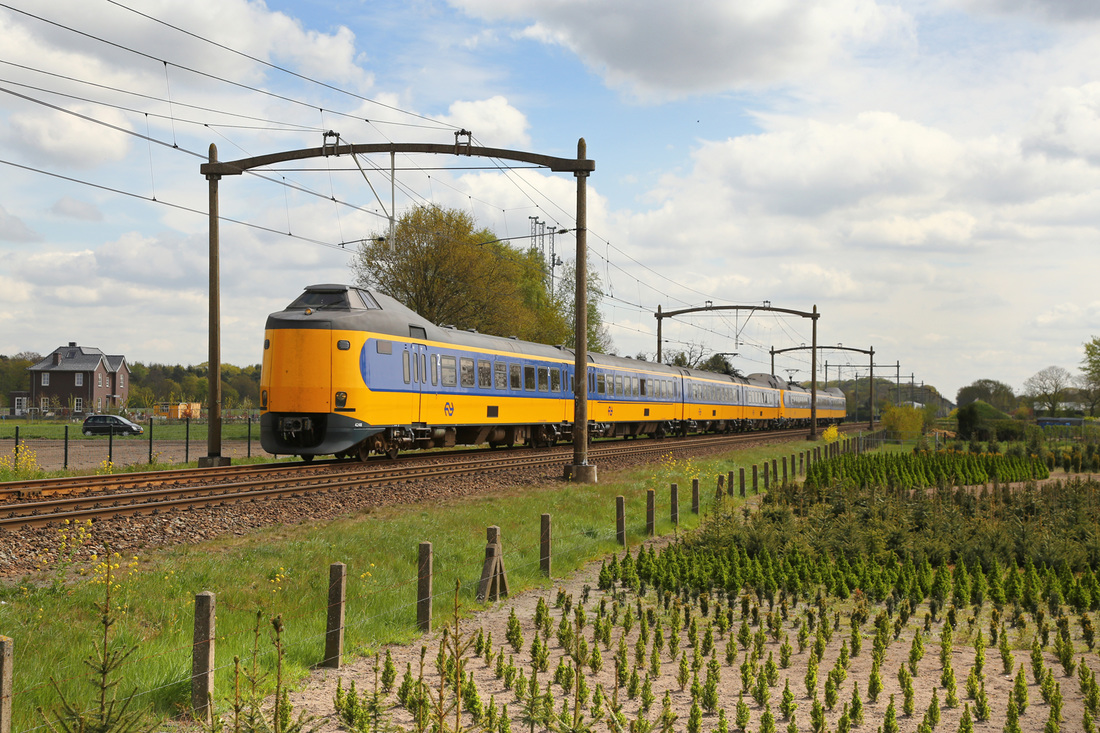 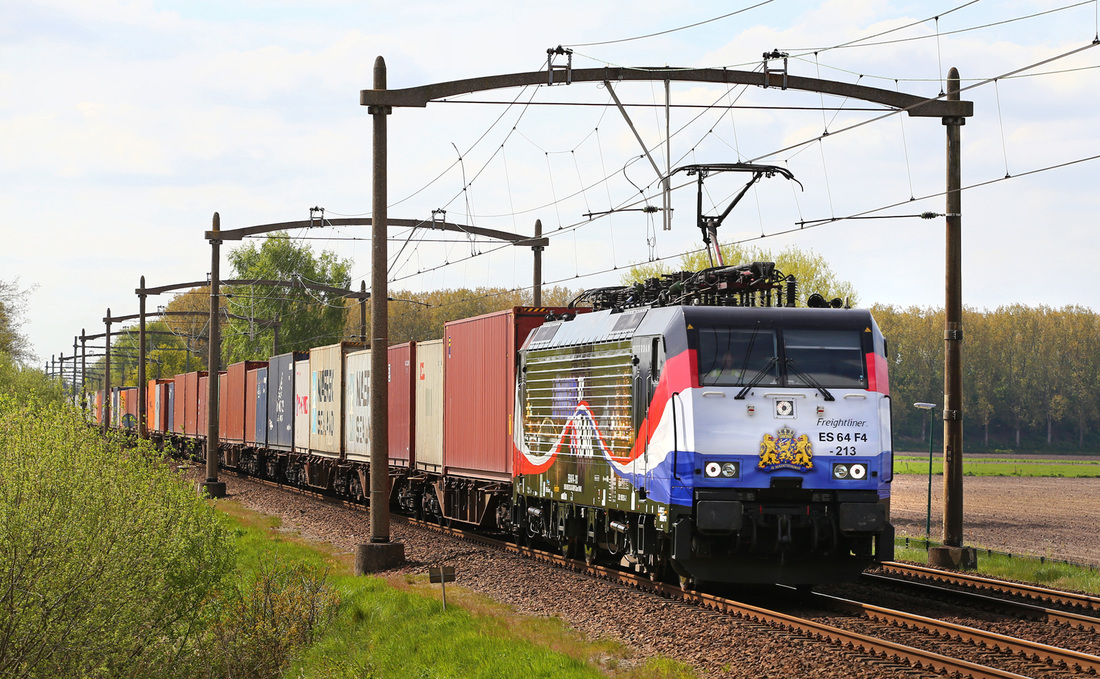 In a joint operation between ERS and Freightliner Class 186 No.186213 passes Gilze Rijen with a container train heading to Poznan (Poland) from Rotterdam. 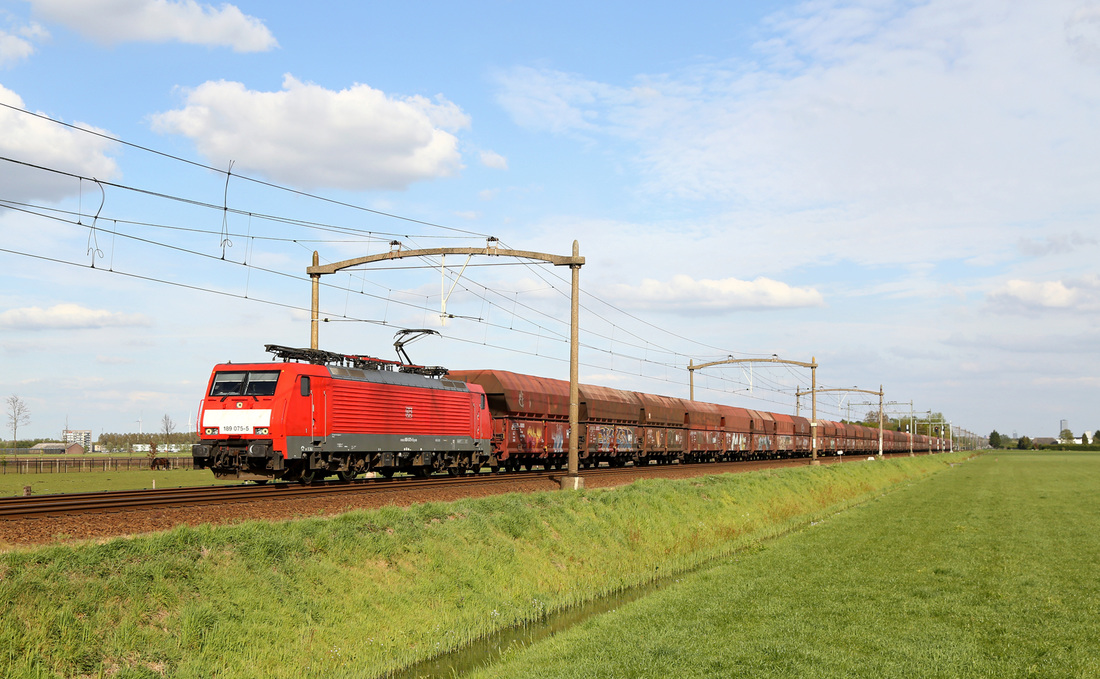 Day 6 was the final day of our trip, we departed from Breda after breakfast, a headed back into Belgium towards the Eurotunnel Terminal at Calais. On route between Breda and Calais we called in at Aalter Station in Belgium for an hour. The station is located on the busy mainline near Brugge. We were lucky enough to find Crossrail Class 66 No. DE-6302 located in the station loop. DE-6302 was in serious  problems early on the Saturday morning while in charge of a auto-carrier train. It reportedly threw a piston, which resulted in the oil being vented through the exhaust. The loco was later towed to Rampskoff Depot where it underwent repairs. The locomotive radiator room also contained 10 containers of oil suggesting the loco had been drinking large quantities of oil for some time. 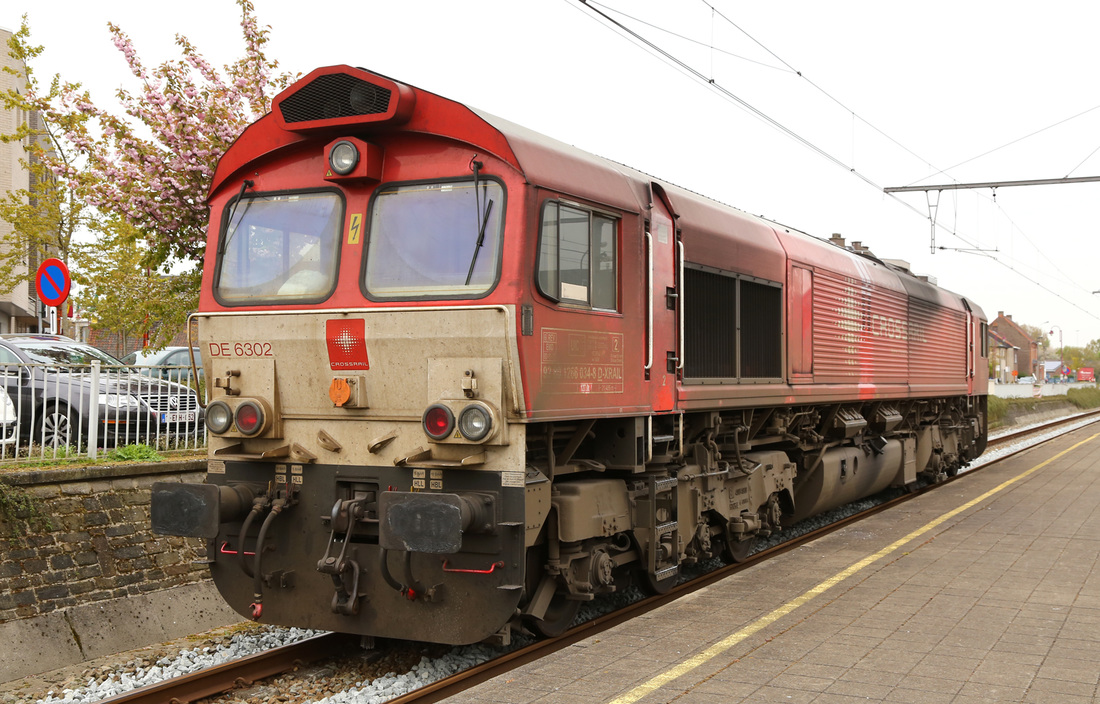 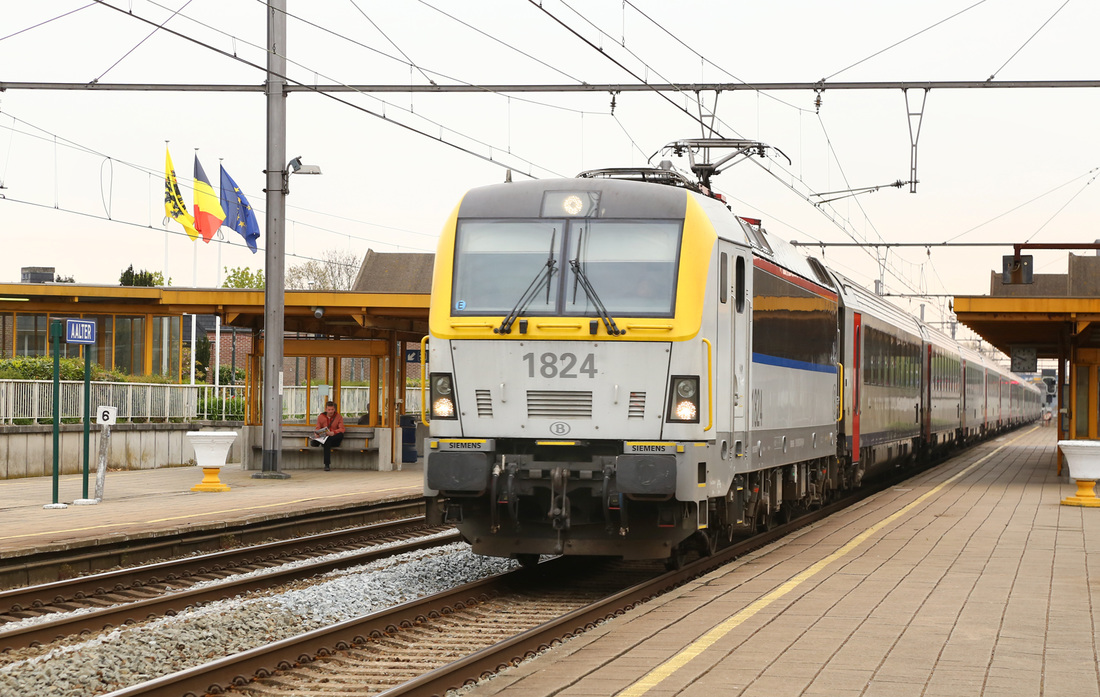 Class 18 No.1824 departs from Aalter on route to Oostende. 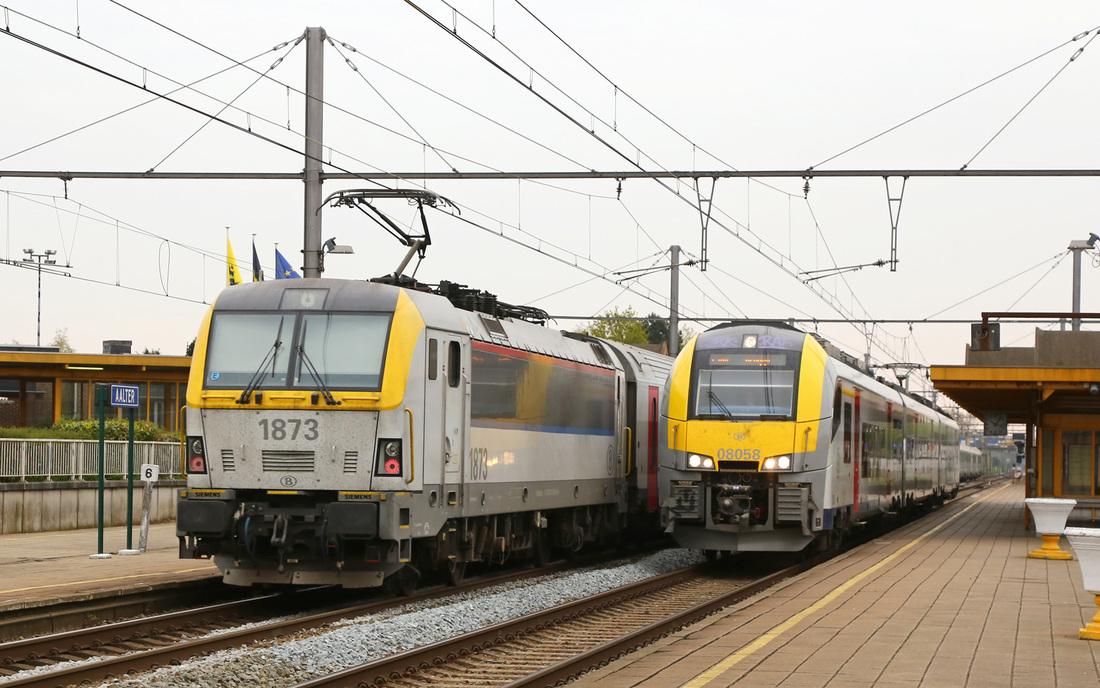 Belgian Railways Class 18 No.1873 speeds through Aalter on route from Oostende, passing AM08 No.08058 on a stopping service to Brugge. 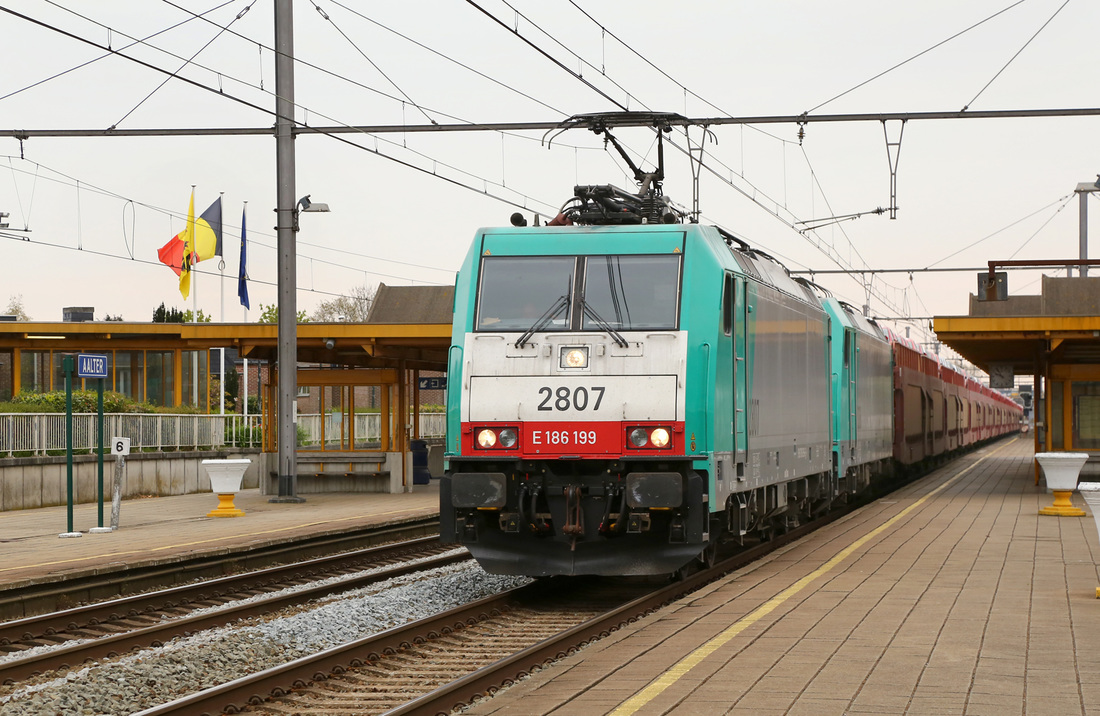