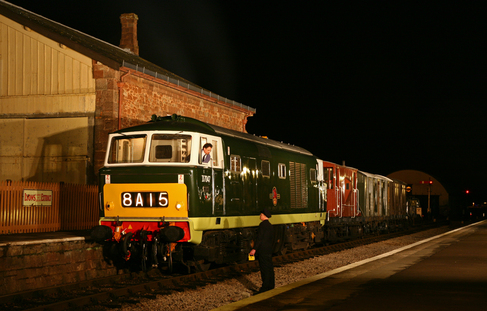 Sunday 2nd January 2011, saw the West Somerset Railway celebrate the 40th Anniversary of the lines closure, when the last scheduled passenger and freight trains operated over the line on the 2nd January 1971. To coincide with with the achievements made since this date, the WSR operated a number of special workings during the day. A Special charter service provided passengers with the chance to travel from Exeter to Minehead on board a First Great Western Class 150 DMU, the DEPG Hymek D7017 was used to simulate the last freight train which operated over the length of the line, it was also renumbered to D7047 for the day and given the correct headcodes which matched those displayed on the loco from the final freight train. After most passengers had vacated the railway D7047 also stared in a unique 'night shoot' at Williton Station organized by David Williams, the EMRPS and the DEPG. The night shoot proved a great hit with those who attended this private event. It was agreed this brilliant event was something which had been lacking on the WSR for many many years. We would like to extend our thanks to those who organized the night shoot for providing some excellent and unique photographic shots. We have provided a selection of images from both the daytime movements and night shoot in this gallery.
After waiting for WSR Steam services to depart from Minehead, D7017 set off with the replica freight (from the last day in 1971) to work over the whole length of the line. The loco looked and sounded superb. In order to fit in with other passenger services the loco also had two 20 minute stops at both Blue Anchor and Crowcombe Heathfield, allowing plenty of time for photos and admiration to be taken. Here D7047 (D7017) accelerates away from Watchet with the 13:00 from Minehead to Bishops Lydeard. 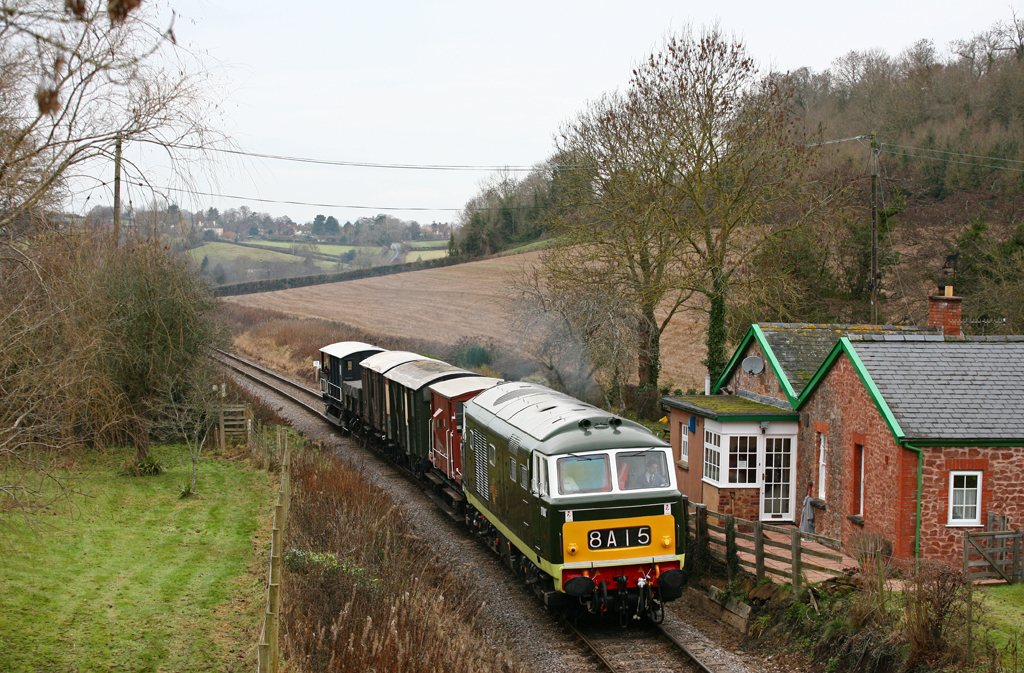 A scene which probably hasn't changed that much since 1971, D7044 (D7017) passes the cottage at Woolsten Moor between Williton and Stogumber. The short freight consisted of one bake van, two box vans, one open wagon and a Toad Brake van. The Toad was later removed at Williton for the evening night shoot.
While at Crowcombe there was a chance for people to view the Hymek locomotive up close and enjoy the sound of it's Maybach engine. It should be noted that at the time these images were taken D7017 was the only fully operational Class 35 Hymek in the country. D7018 being out of service on a long term overhaul at Williton, D7076 at the East Lancs Railway technically at that point it wasn't a Hymek as it's was fitted with a Western engine while it's own power unit was overhauled, and D7029 is a kit of parts awaiting overhaul.

After the last two steam services for the day had departed from Williton the first 'night shoot' in many years was held within the confines of Williton Station. Organized by David Williams , the EMRPS and Williton DEPG, the shoot would depict the final freight train from 1971 at night, posed for various scenes within the station area. Perhaps scenes like these could have been recorded on the last day in 1971. D7047 standing a Williton Station waiting for the road forward to Minehead with it's short goods train in tow. Incidentally we were told the head codes shown were correct in accordance with photos of the final goods train on the line, however 8V03 was not the head code for the train the Hymek was working. The thinking being the loco had previously worked another freight to Taunton and it's head code had not been changed for it's journey to and from Minehead. 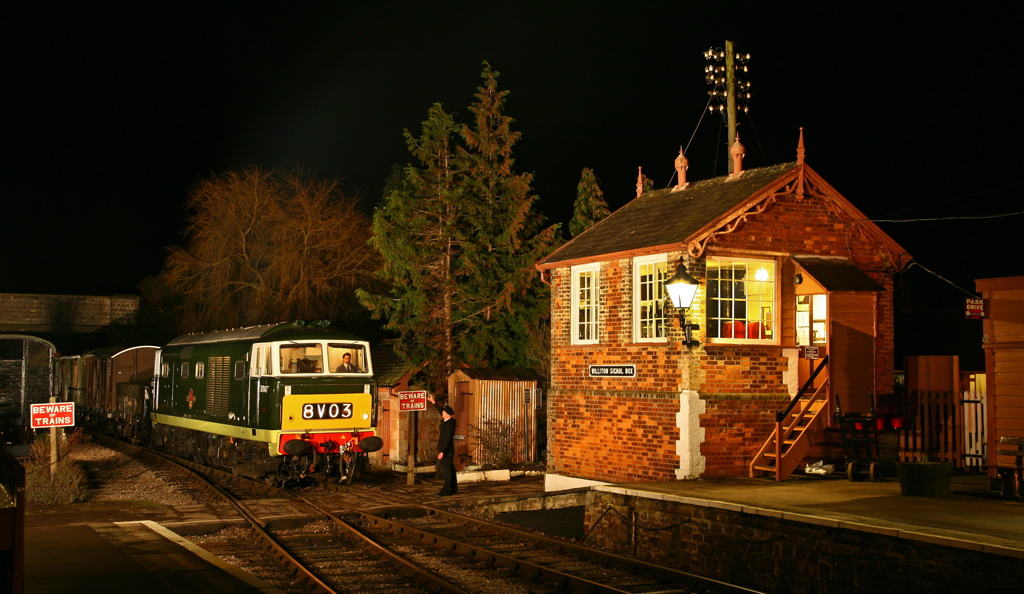 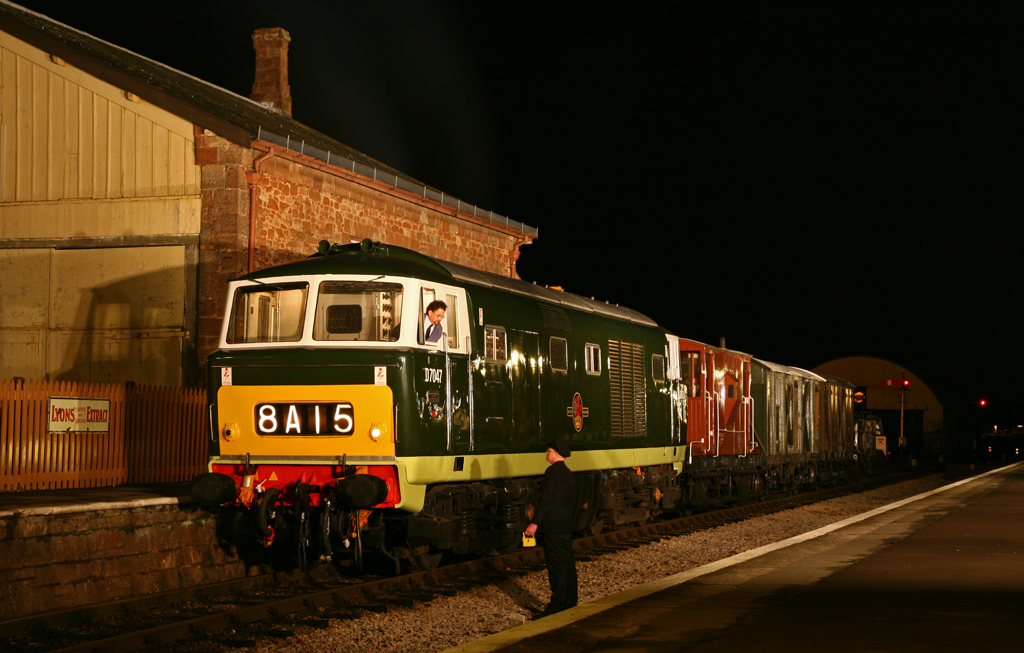 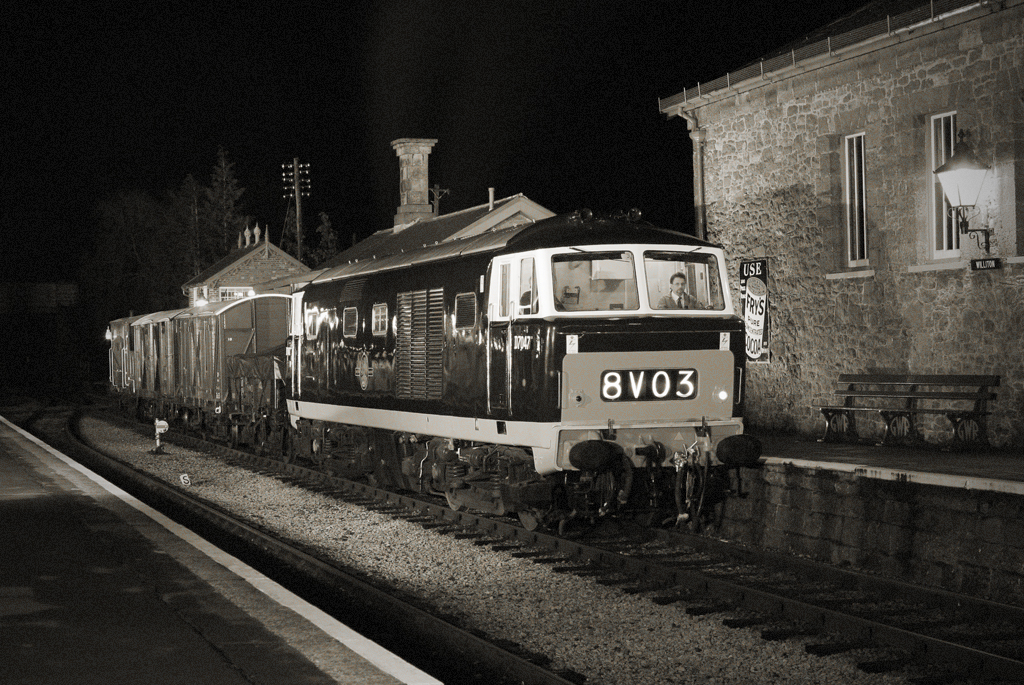