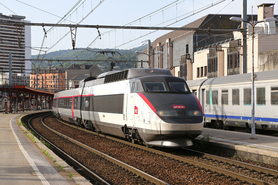 Between the 3rd June and 11th June 2014, I traveled to the Savoie Region of France for a one week railway holiday to record rail traffic in the foothills of the Mont Blanc mountains. Having flown from Bristol International Airport to Geneva we exited via the French sector before picking up a hire car for the week.  After a plesent drive through the mountainous region our first night was spent in Amberieu, before following the main line south to Chambery (via Curloz and Aix Les Bains) the next day. Chambery would then be our base for the remainder of our stay.
During the week long visit we planned a mix of car travel (for the best photographic opportunities) and visits to two cities (Lyon and Grenoble) using SNCF rail travel. There were only two half days of rain during the first and last days of the trip, other than this temperatures in the Savoie region of France were fluctuating between 28 - 34 degrees each day. Chambery is situated on the mainline to Italy, the area conveys a large amount of International freight over the scenic route into (and out of) Italy. Automotive, Steel and Grain flows are particularly common. Although the images may portray a 'busy scene' it's worth noting that there can be some lengthy waits between train services. The line is also more prevalent during the winter ski season as additional TGV services operate through to the Bourg St Maurice ski resort. Freight services can vary depending but most seem to operate during the morning and late afternoon.

Having arrived in Geneva earlier in the day we drove via the French Sector exit towards Amberieu via Bellegarde & Nantua. Having arrived a little earlier than planned we paused just north of Amberieu at Pont-d'Ain on the mainline to Bourge-en-Bresse. After checking into our hotel for the night we also spent a period of time on Amberieu Station.

Day 2 started somewhat cloudy, with the weather deteriorating throughout the the day turning into rain for a short period in the afternoon. Our journey on the second day would take us from Amberieu to Chambery via Curloz and Aix les Bains heading south. The roads through the mountain regions closely follow the railway lines, so our task of finding photographic locations was made somewhat easier for the first day. 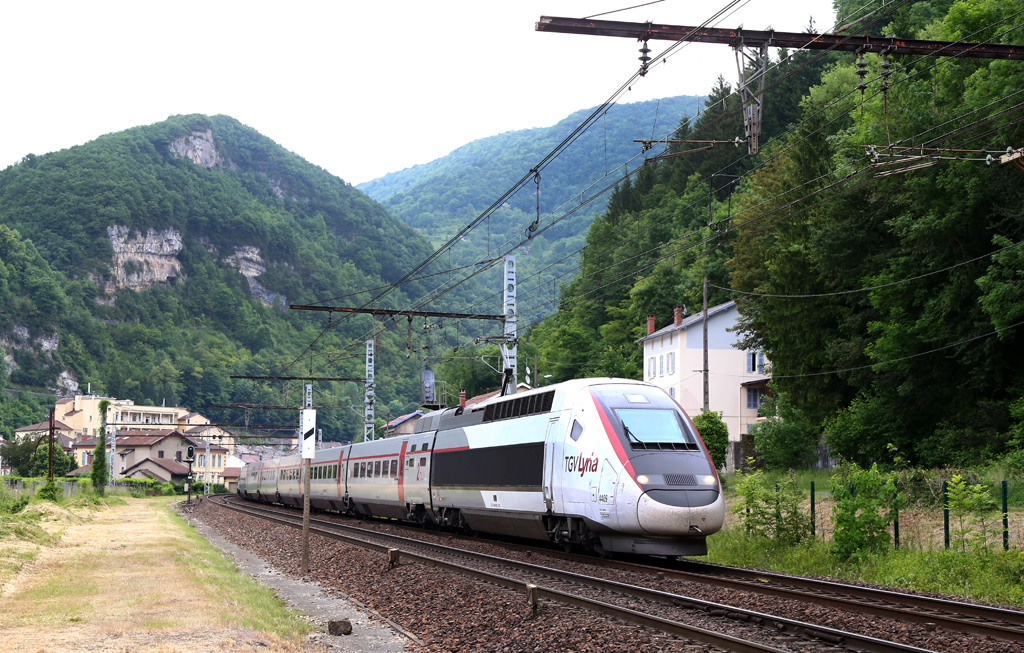 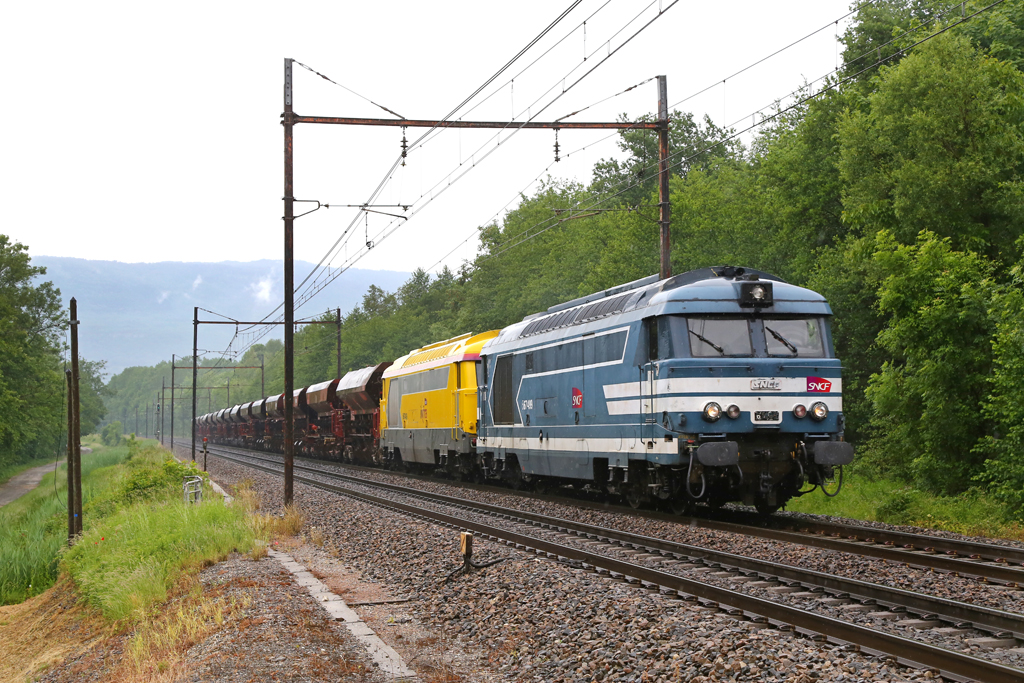 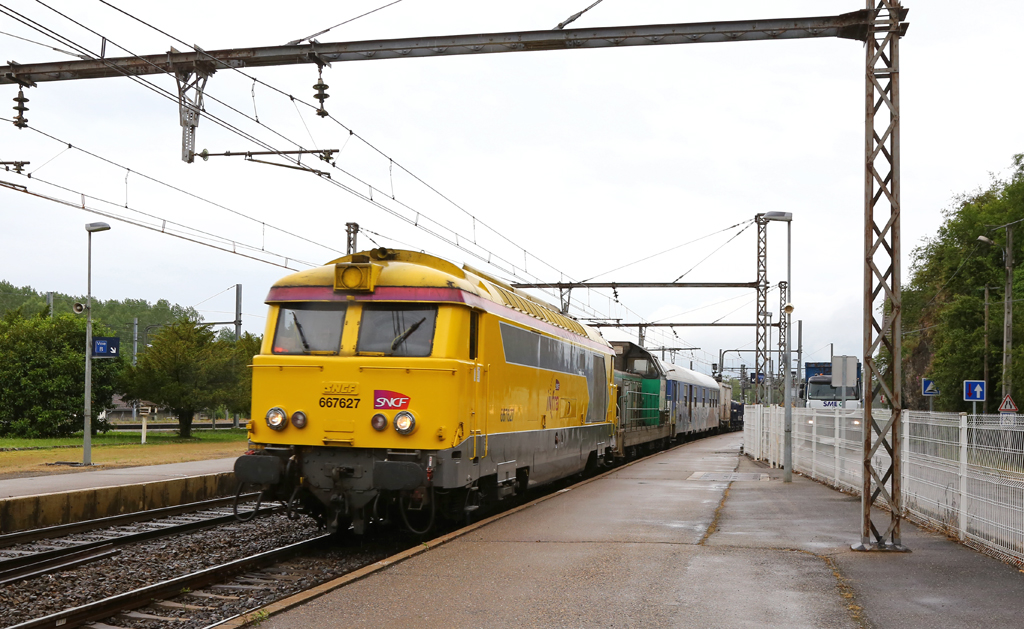 SNCF Infrastructure Class 67500 No.667627 passes through Curloz station complete with an engineering train having just exited the yard to the north of Culoz station. 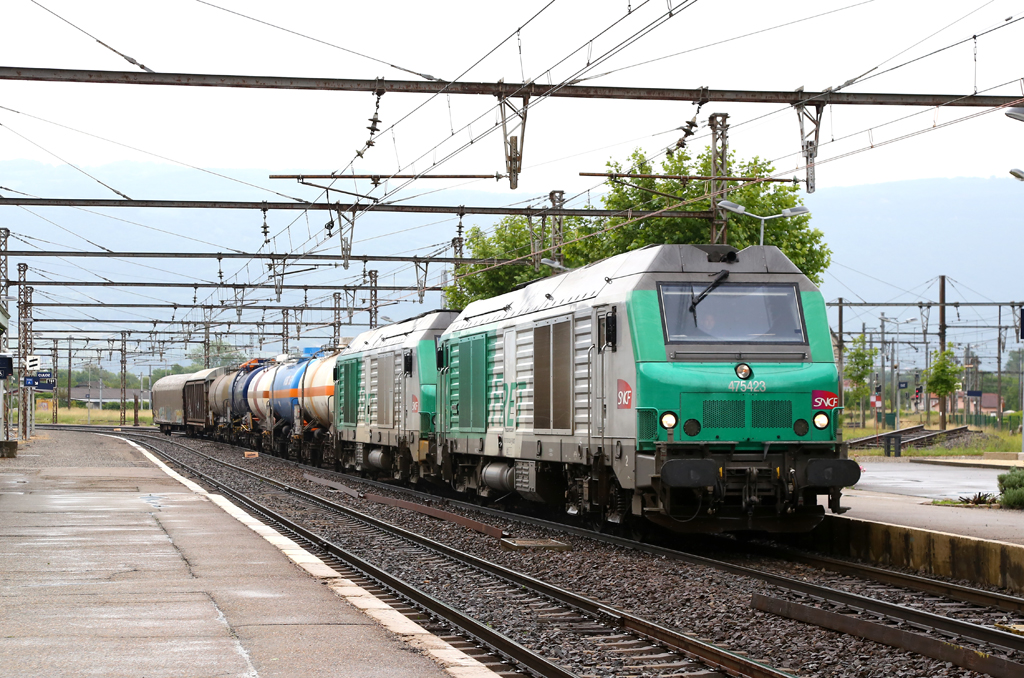 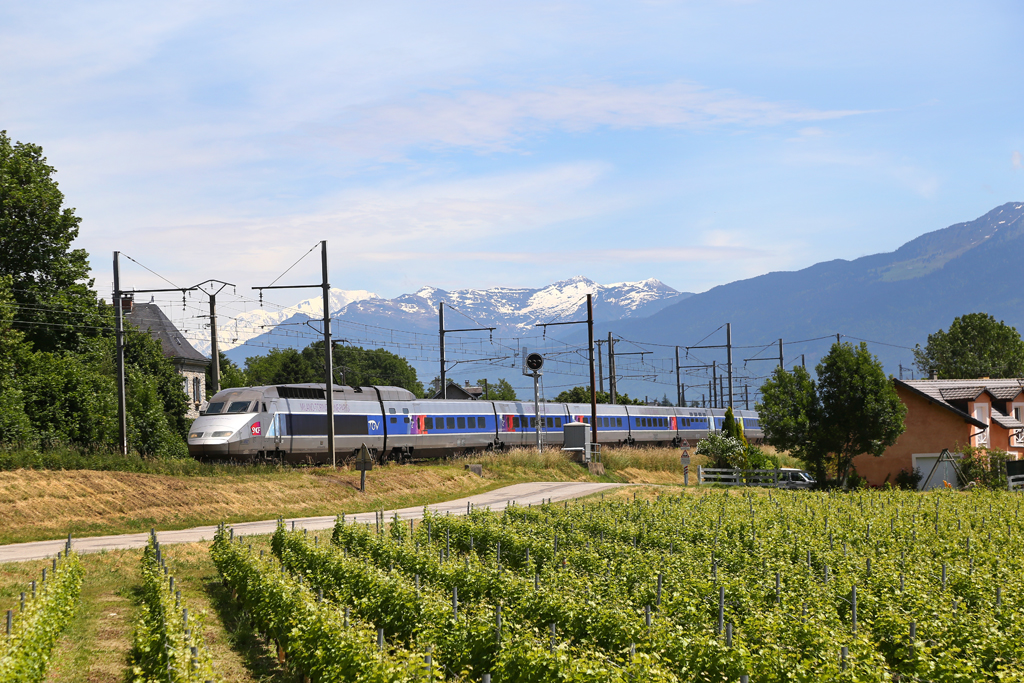 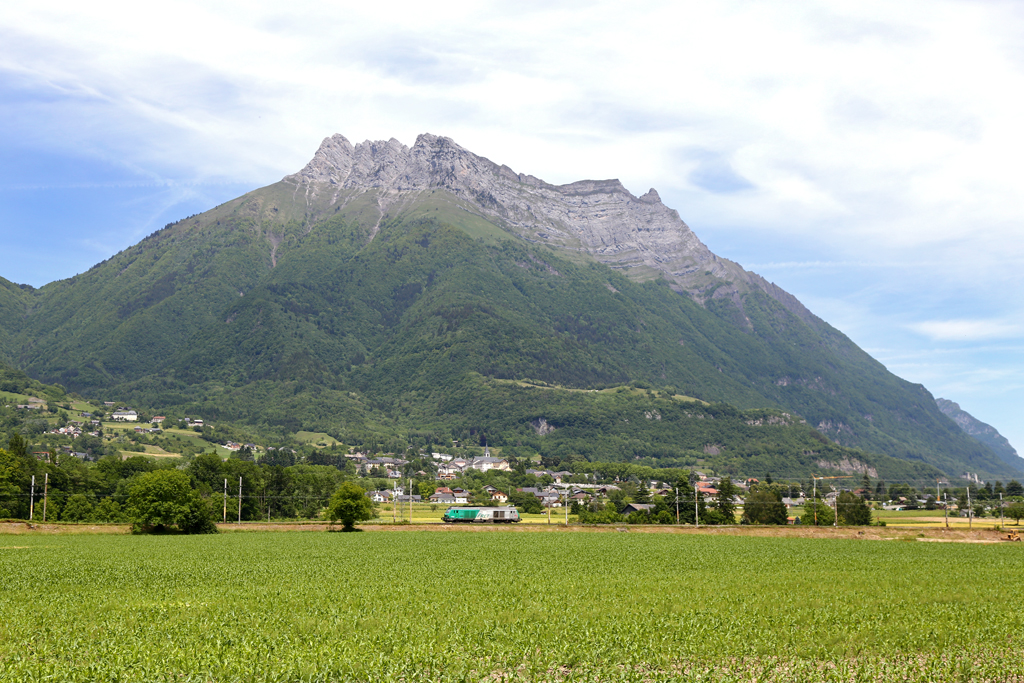 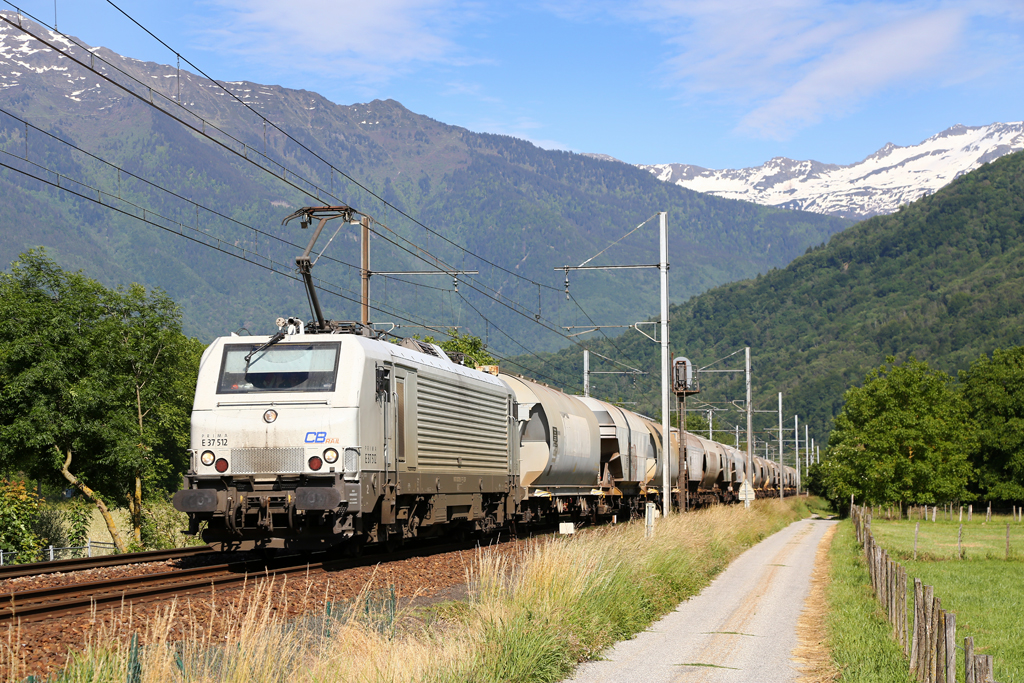 As day 4 started the heat was still increasing with temperatures now peaking in the low thirties. We spent the morning period at one of the many wine growing areas (Cruet) before moving closer towards Italy, calling in at Argentine, and other locations on route. We returned to Chambery Station for the evening peak in order to sort out tickets for the next day's trip to Grenoble and to record some of the French diesels operating the stopping services to Grenoble.
The discovery that French diesel locomotives were operating regular Chambery - Grenoble stopping services during our visit was a great surprise. While we had expected to see a few diesel locomotives, an operation on this scale could see at least 6 sets a day operational. The Chambery - Grenoble was closed for most of 2013 while the line was electrified. When the line was re-opened in December 2013 there was no new rolling stock available so Chambery retains 9 Class 67300 diagrams on weekdays pending the arrival of EMU's. Above No.567302 is pictured forming the 18:24 Chambery - Valence Ville  while No.537634 later arrived from Grenoble. The stock used for the service is in very poor condition, mostly covered in Graffiti from previous storage. However these services won't be around for long, as once SNCF have more EMU's available these will be operating the route.

Day 5 marked the first of two French rail trips planned during our stay. Having already discovered French diesels were operating peak stopping services to the city, we decided these heritage items of rolling stock would provide the traction for our trip. Grenoble also proved to be a wonderfully architectural city surrounded by towering/ imposing mountains, which made for some nice photography. The journey between the two cities offered some superb views of the snow capped alps to the south, and stunning scenery along the journey. 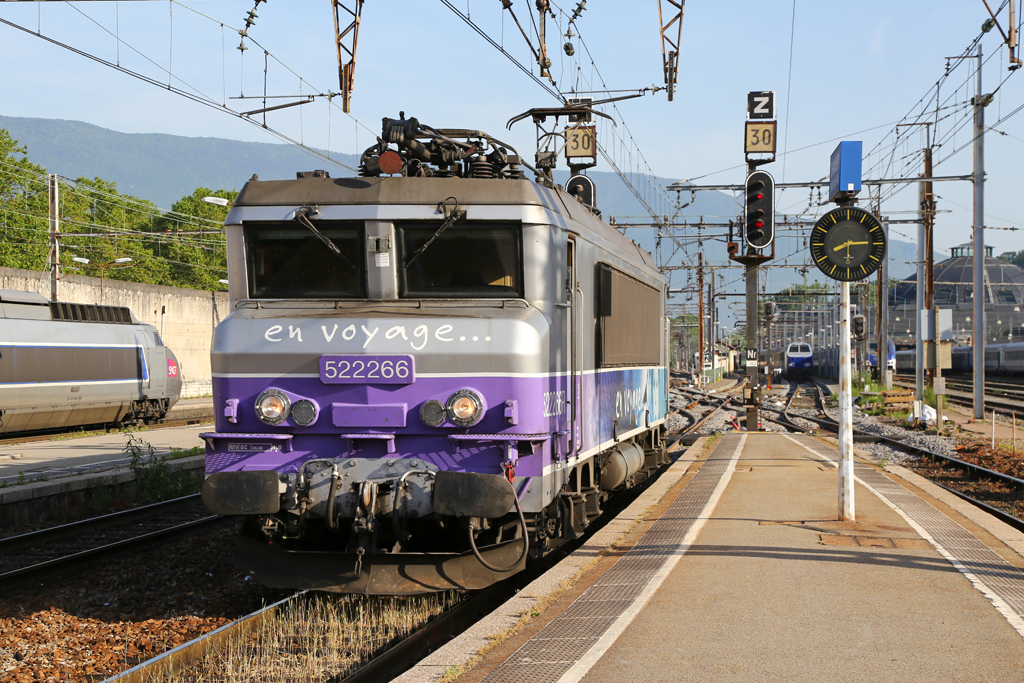 SNCF BB22200 No.522266 departs from Chambery station (despite the lights indicating otherwise) to the roundhouse depot for servicing.
Above is a video featuring some of the French Diesels which operated in the Chambery area during our visit. 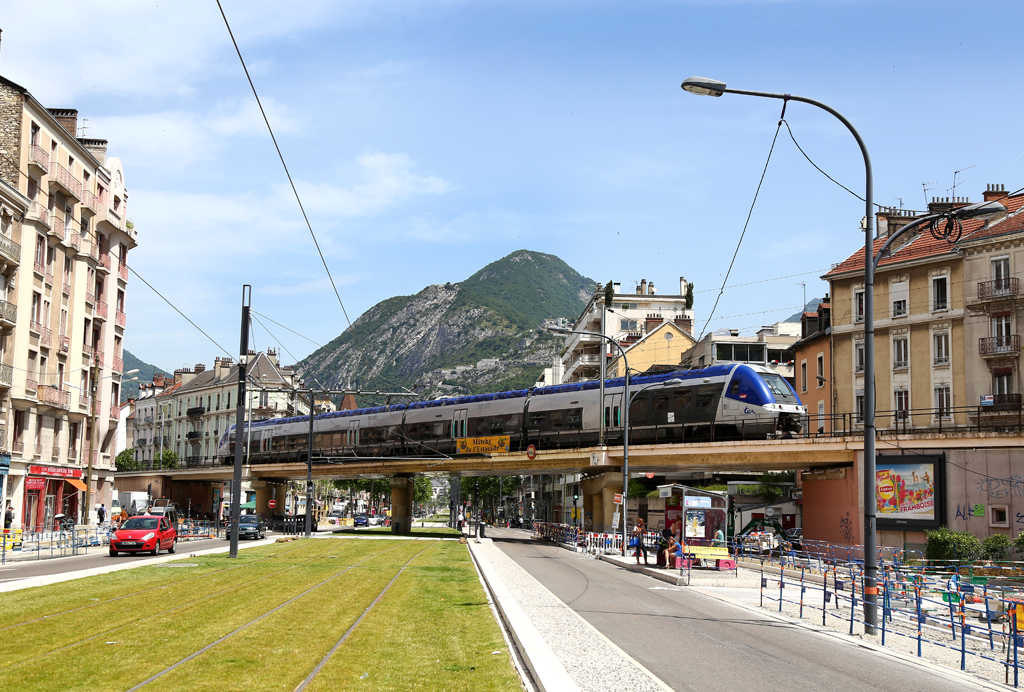 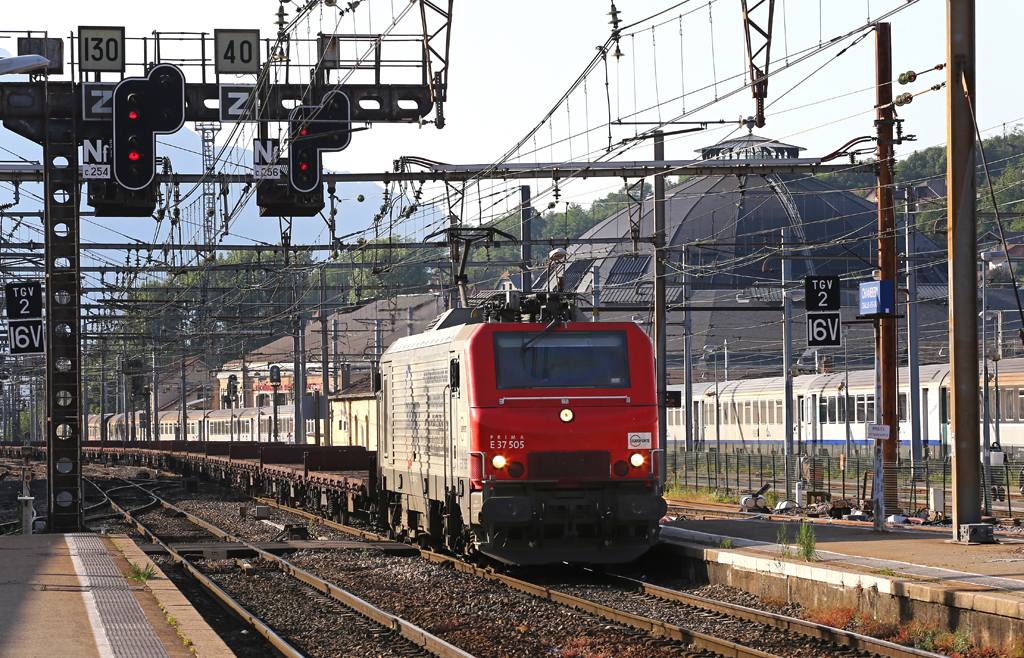 Having learned a little more about the diesel loco hauled services and having located a couple of potential photographic locations from the train the previous day, we set out on day seven with the intention to record more of these rare diesel locomotive hauled passenger trains. We covered much the same area as in previous days between Chambery and Les Treppes, but also migrated onto the Grenoble line in order to record some of the loco hauled services. 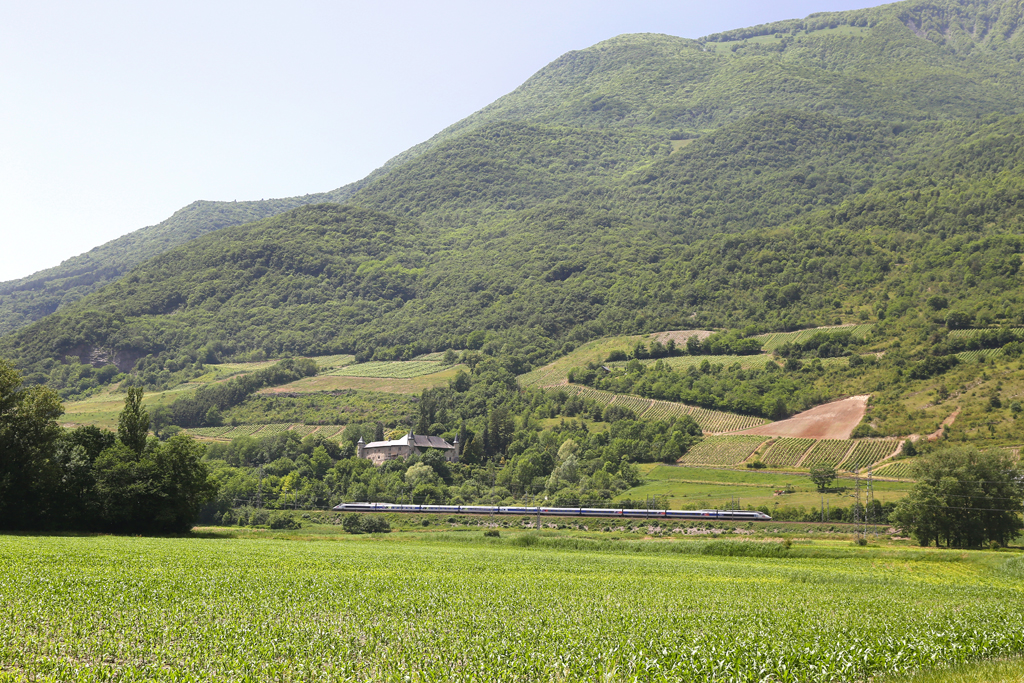 SNCF TGV Duel Voltage set No.19 arrives and departs from Chambey with a passenger service from Paris Gare de Lyon to Geneve.

Our final full day in France provided the threat of poor weather during the afternoon period with thunderstorms brewing over the Alps and a 50% chance of  thunderstorms during the afternoon/ early evening period. With this in mind we set off early from the hotel to make the most of the day, and decided to cover the lines between Chambery - Poncharra and Chambery - Argentine. The split in these two lines occurring at Montmelian Station.  The day proved to be another interesting one, with a few rare workings thrown in for good measure.
During the morning peak rush hour in Chambery, Alstom Siemens BB75000 No.475447 tows 'Y' No.8514 through Montmelian. 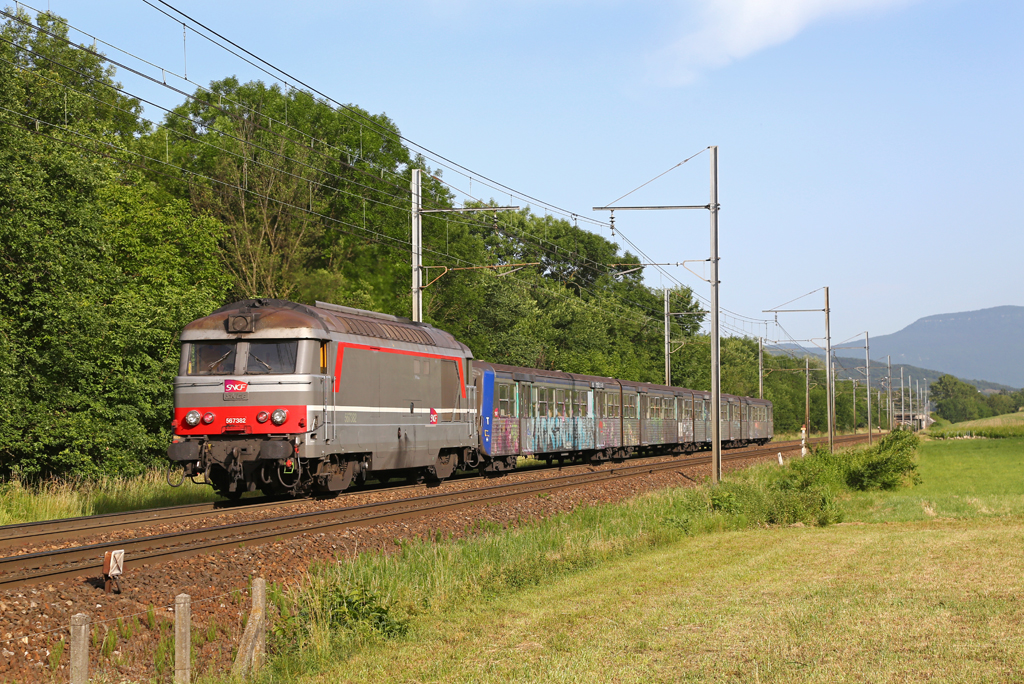 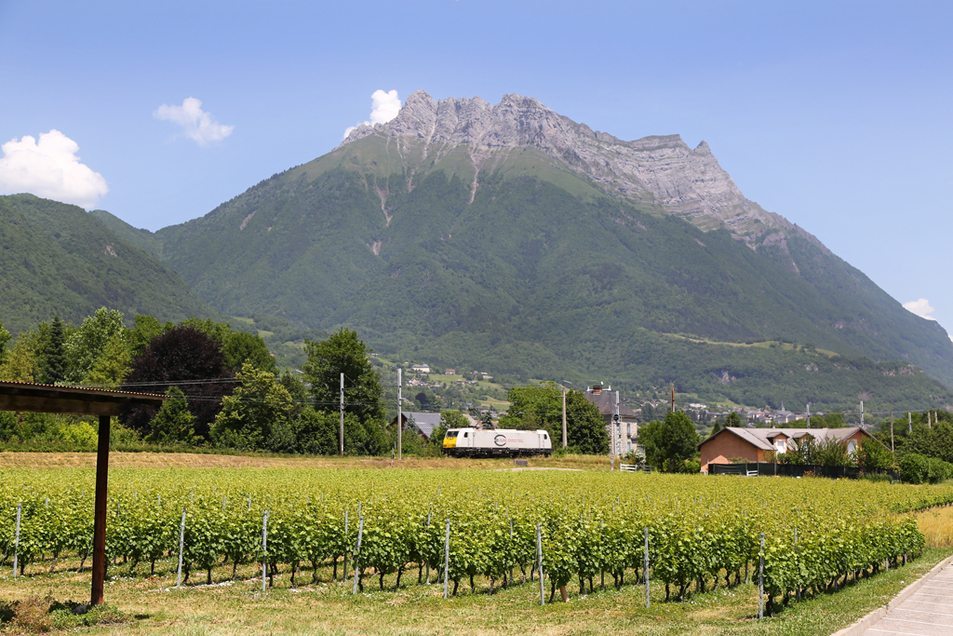 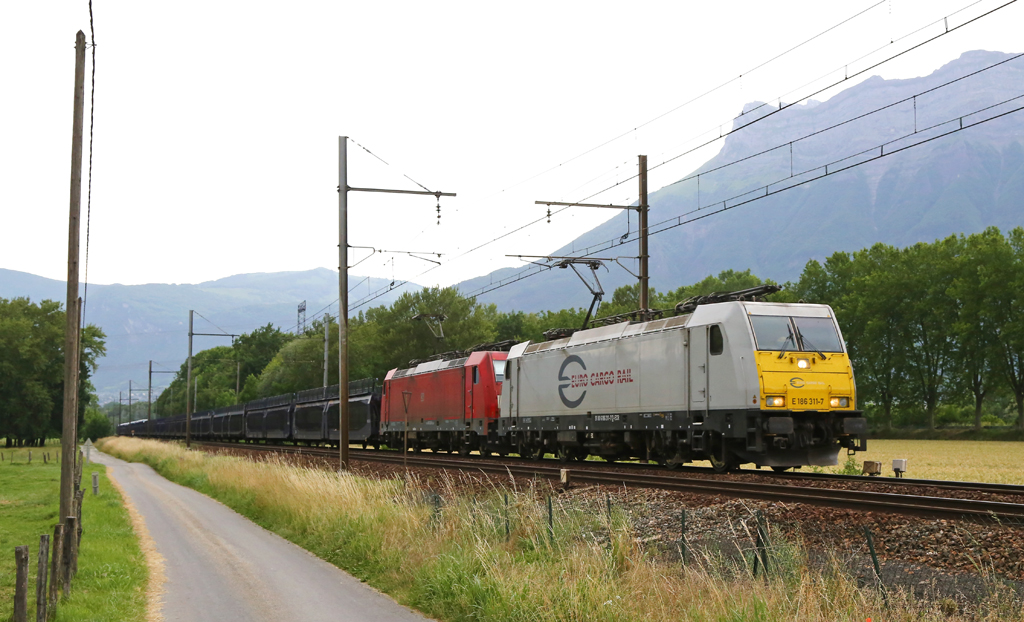 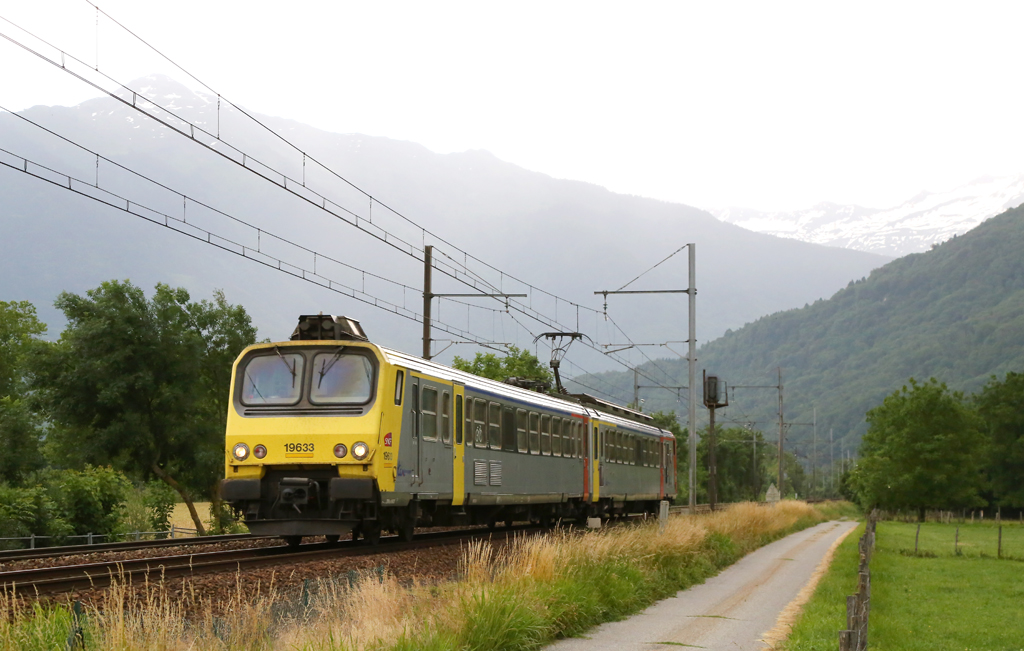 With thunderstorms brewing from the Alps behind Z9600 No.9633 passes Les Treppes with the 16:24 Modane - Chambery service. 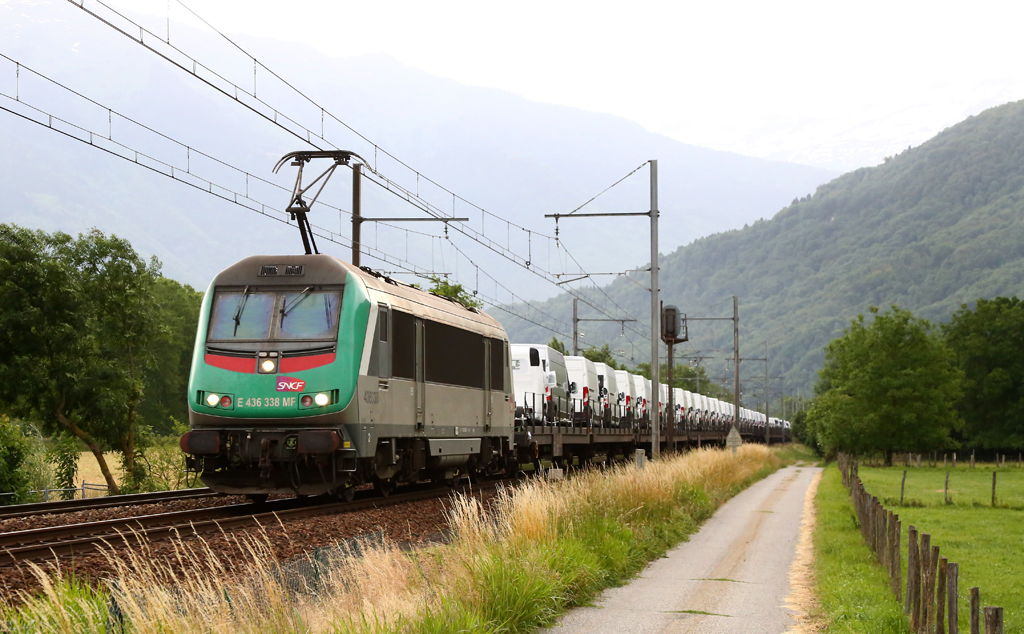 SNCF BB36000 No.436338 passes Les Peppes with a trainload of Fiat vans from Italy heading into central France.