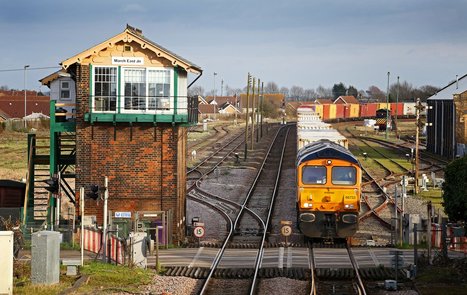 The East Anglian Region is currently on the verge of major change, with Greater Anglia having ordered and entire fleet of Electric Multiple Units from Stadler, locomotive hauled trains between London Liverpool Street and Norwich will soon be replaced by new EMU's. The issue of increased container traffic from the port of Felixstowe is also now feeding many more services via Ely and March thanks to a new multi million pound chord constructed at Ipswich, this allows services to head both north and south from the container port, giving far better flexibility. Following the completion of Cross Rail in London paths for freight services will become even harder to obtain, and so threading them through the London suburbs will also become more of a challenge. The future seems to indicate that the route via March to Peterborough (which itself will also need upgrade work) may become a more favored route for container trains needing to access the Midlands and Scotland. I spent just over a week in the Ipswich/ Norwich area recording the current freight and passenger services before the major changes take place.

Day one of our trip saw us travel to London Paddington before taking a cab to Kings Cross, the reason for the cab was the closure of the London Underground Circle Line for engineering work, and the resulting overcrowding of the Bakerloo Line. The obvious and sensible choice was a cab to Kings Cross rather than get caught in the underground crush. Our route to Ipswich was also different, normally you would expect to travel via London Liverpool Street station and catch one of the half hourly Greater Anglia services to Ipswich. However this route was also closed for Network Rail upgrade work linked to the new Cross Rail project. Our revised planned route would be with Virgin East Coast to Peterborough before later catching a stopping service all the way to Ipswich passing through March, and Ely on route. Peterborough also proved to be a good point to change services as very soon the iconic HST's which operate on the East Coast Mainline will soon be replaced by the new 'Azuma' Bimodal units being built by Hitachi for Virgin East Coast. Peterborough was an ideal location to record the HST's passing through the station at speed and record these 40 year old workhorses before they are removed from the route. 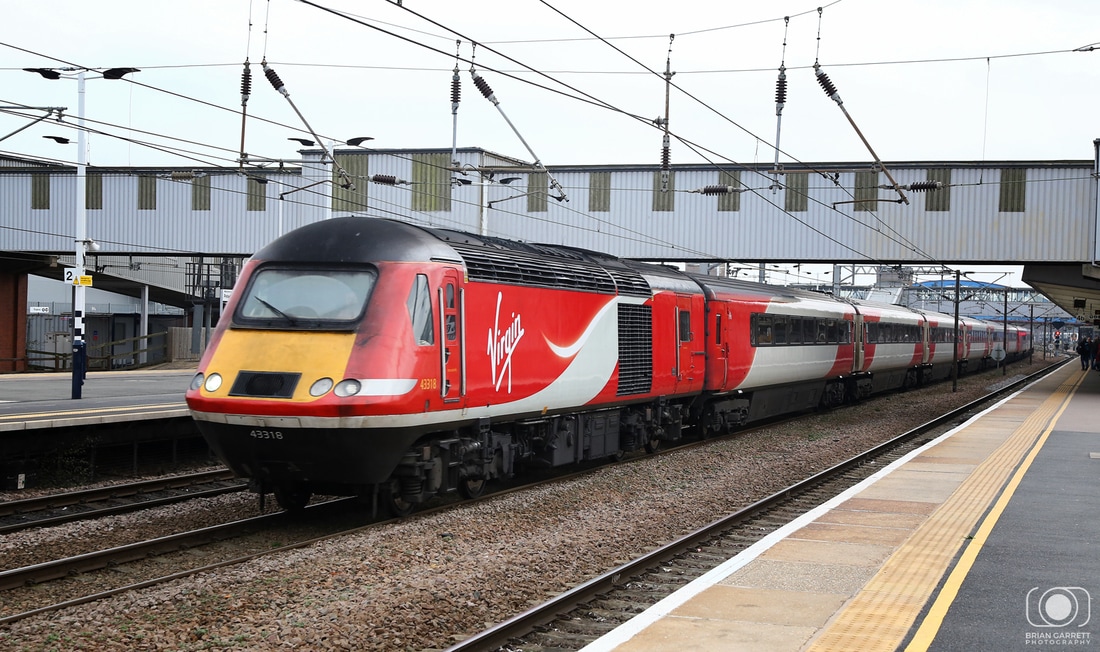 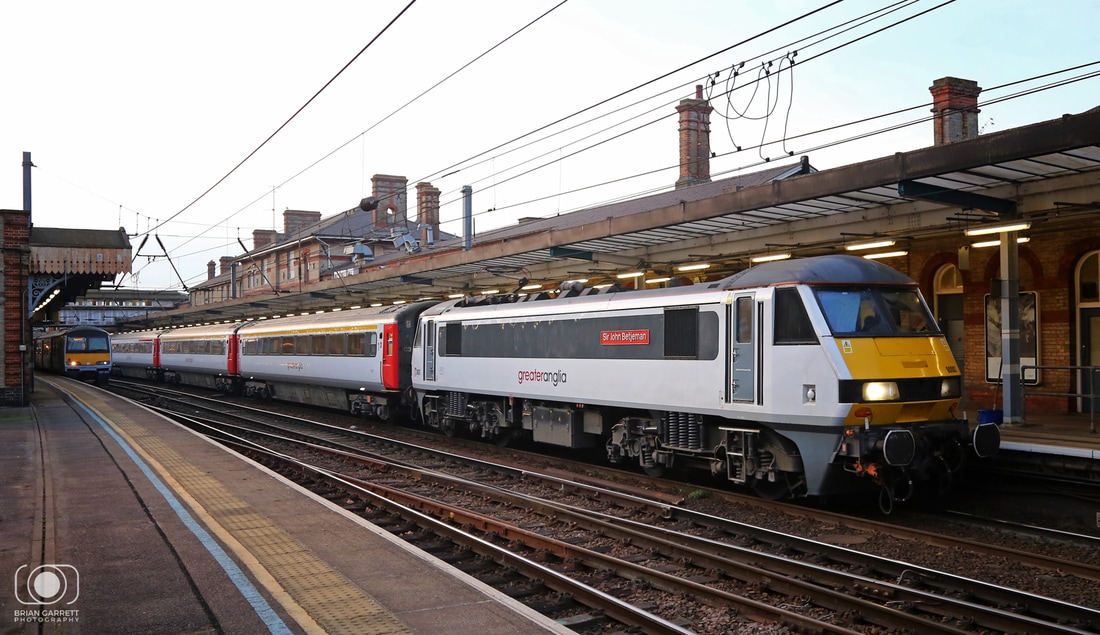 Sunday 12th March again saw the Great Anglia line closed from Witham into London. Replacement bus transport was provided for passengers from there to local Central Line tube stations. As a result Greater Anglia were operating an hourly locomotive hauled passenger diagram to Norwich from Witham requiring just four sets to operate the service. We spent the day travelling between Ipswich and Norwich enjoying the comfortable Mk3 coaching stock and locomotive hauled experience.

Direct Rail Services Class 68 No.68003 'Astute' is seen stabled at Norwich on one of two locomotive hauled sets which operate between Norwich / Great Yarmouth and Lowestoft. 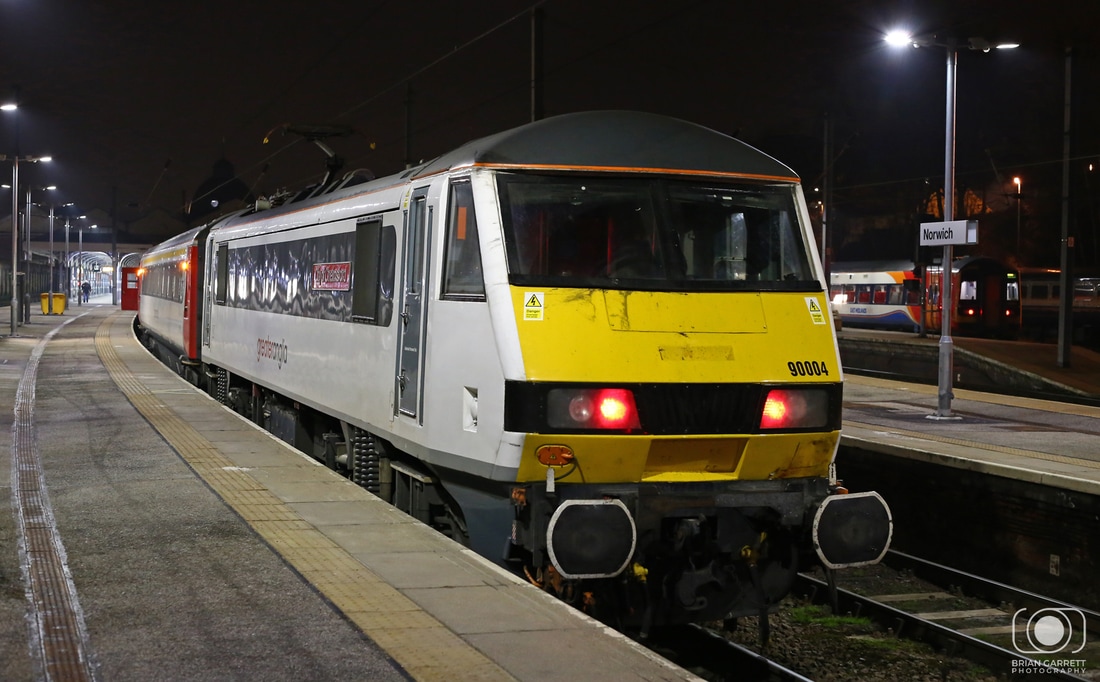 The East Anglian region has long has an association with naming its trains, with many names having a connection to the areas which they operate through. Locomotives and coaching stock sets are currently being well cared for. White can be a notorious livery to keep clean but so far the Greater Anglian franchise is doing a great job on keeping their sets looking like they should. During the 13th March we spent the morning at Manningtree before heading Norwich to cover the weekday locomotive hauled diagrams operating to Great Yarmouth and Lowestoft.

Looking across the Manningtree Marshes, Freightliner Class 66 No.66539 powers through with the 09:12 Felixstowe - Ditton freightliner. 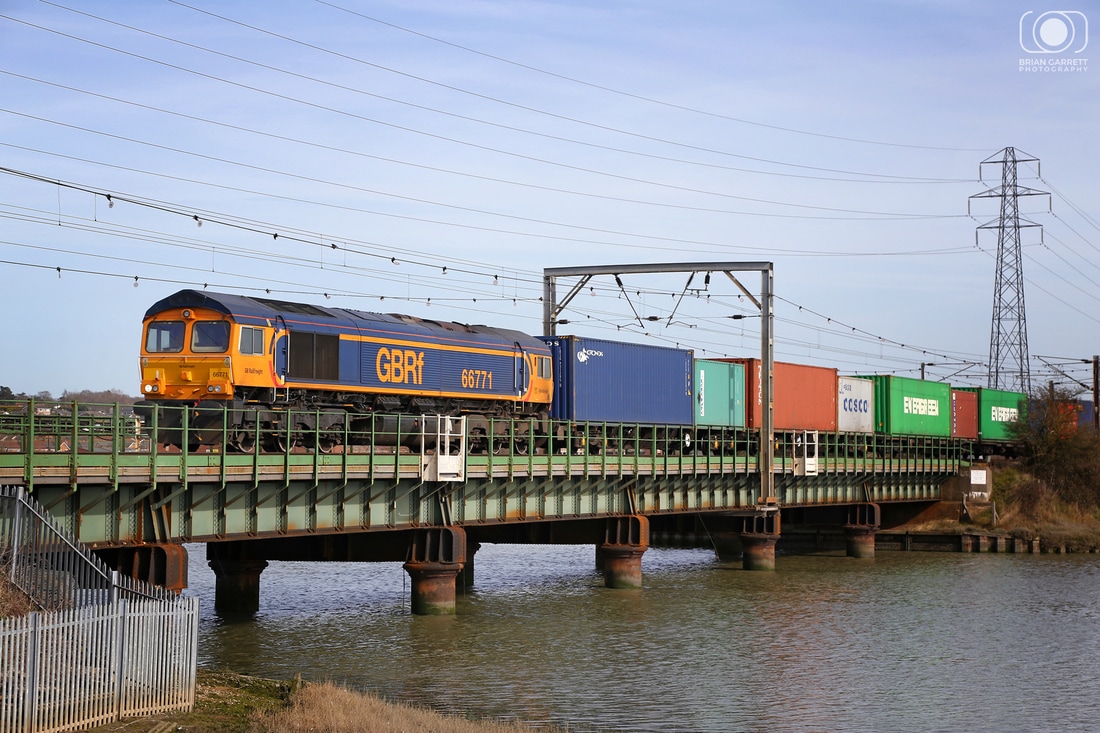 GBRf liveried Class 66/7 No.66771 passes over the estury at Manningtree while working the 4M23 10:44 Felixstowe - Hams Hall container service. 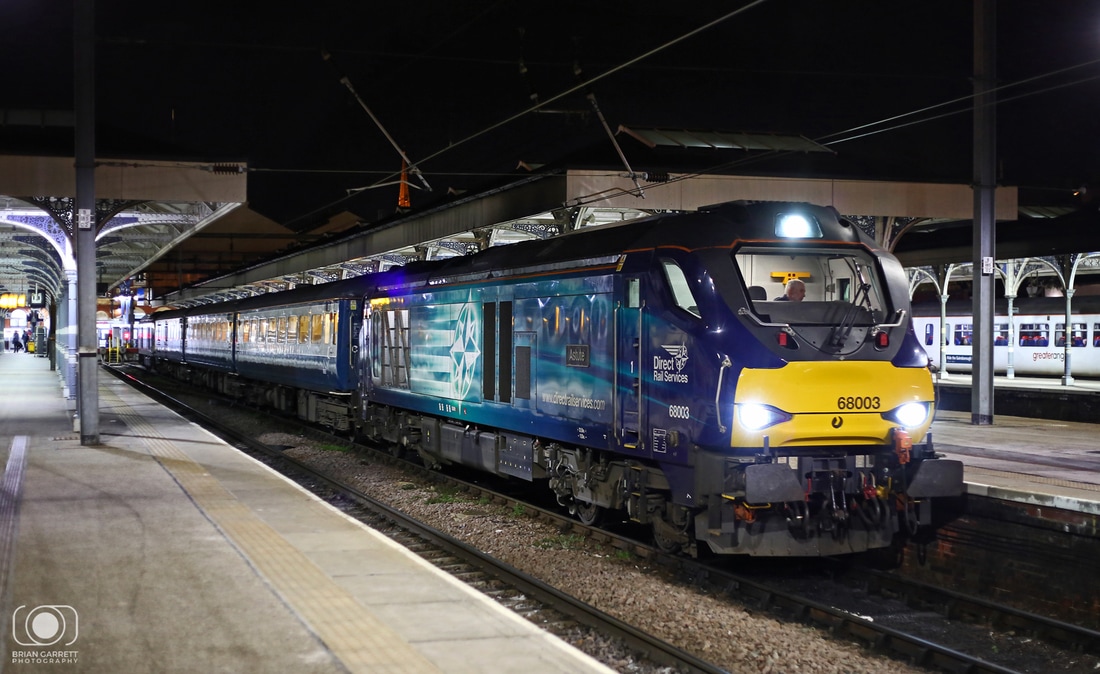 Class 68 No.68003 'Astute' is pictured at Norwich Station ready to depart with the 2P38 1933 Norwich to Great Yarmouth service. 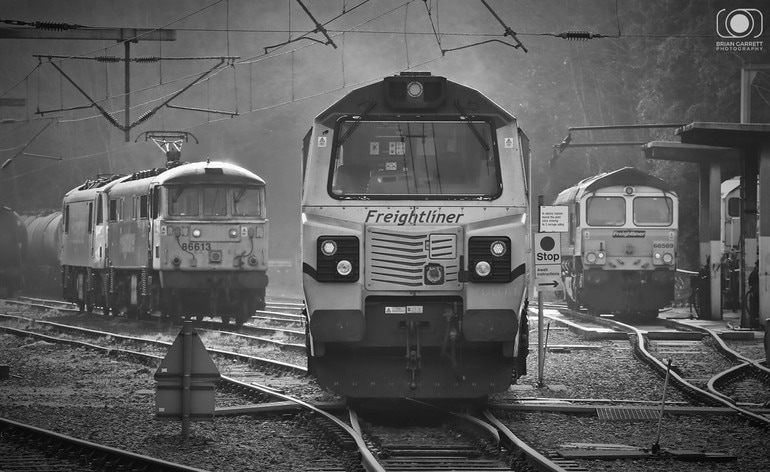 Freightliner locomotives No.70011 No.86613 No.90049 and No.66569 are pictured on depot at Ipswich on the 14th March 2017.
Tuesday 14th March provided another day to explore Norfolk and Suffolk, having spent the morning at Ipswich seeing out the varied photographic opportunities in the depot and station area we headed for March via Norwich. The route through March to Peterborough has been increasing in freight traffic but the route (and stations) are very much caught in a time warp with semaphore signals and older ornate stations. Although it must be said that the station refurbishment and upkeep is excellent, and the East Anglian region has done a lot to preserve its heritage. 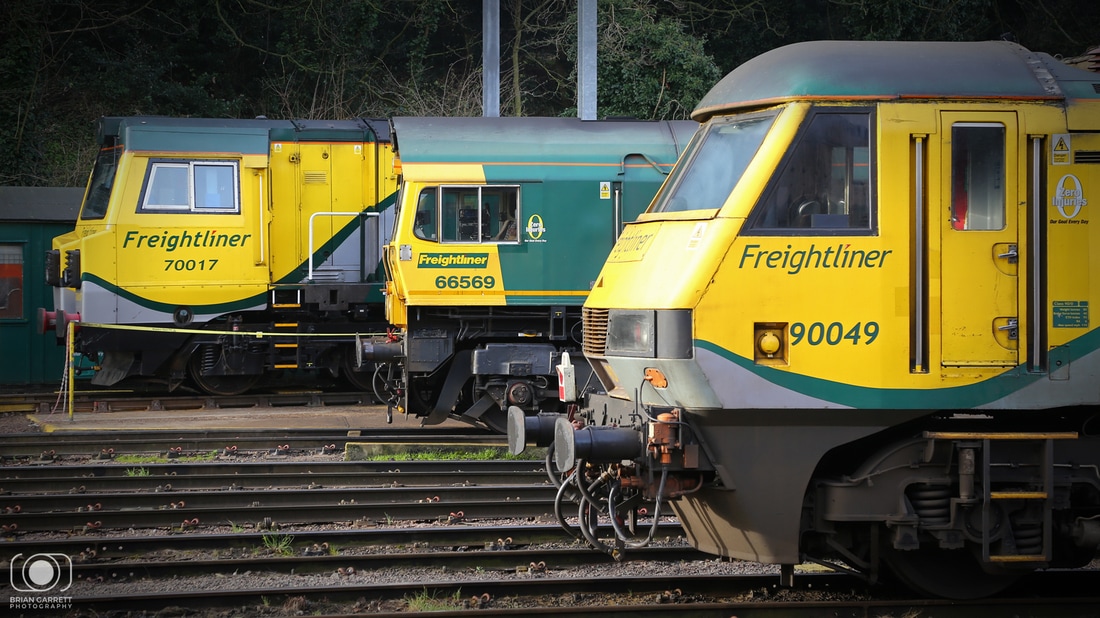 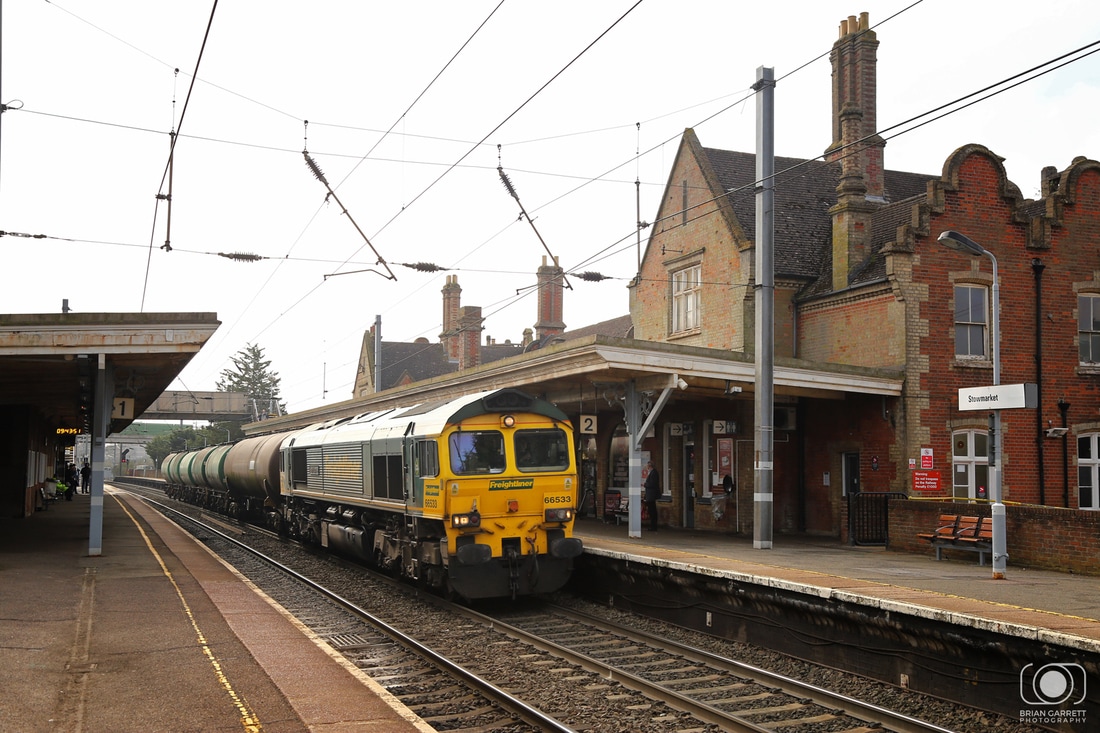 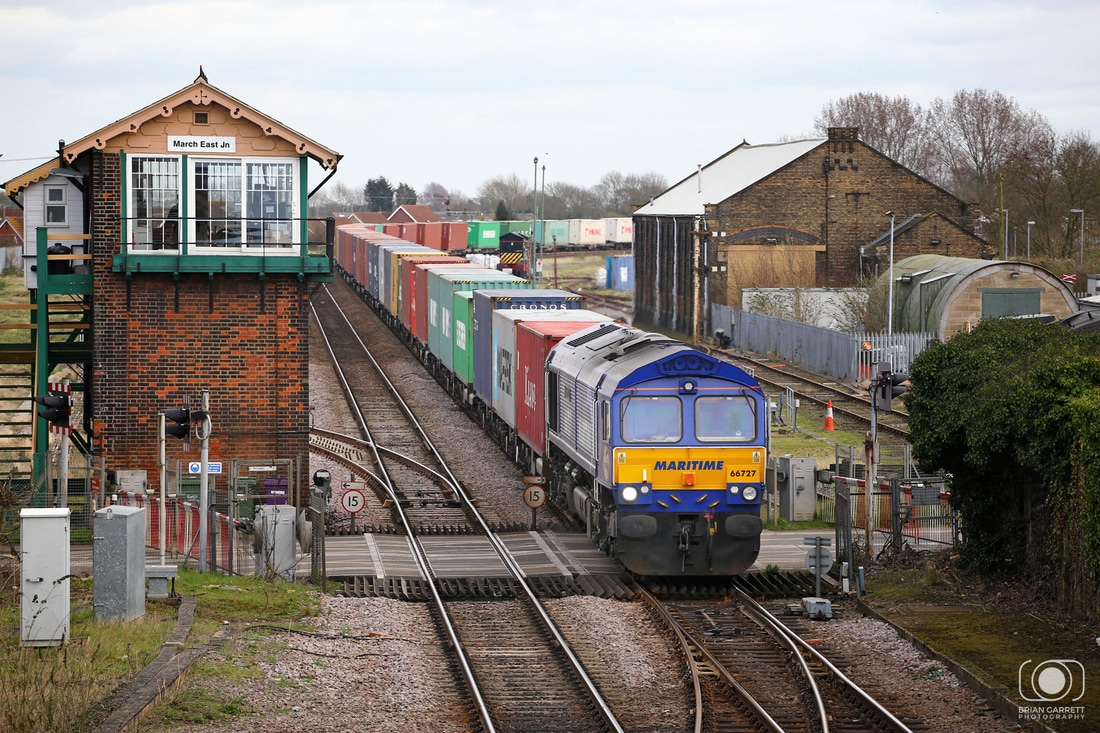 GBRf have recently repaintd on of thier Class 66 locomotives No.66727 in a customer livery 'Maritime'. The locomotive passes March hauling the 4M29 10:29 Feilxstowe to Birch Coppice service. 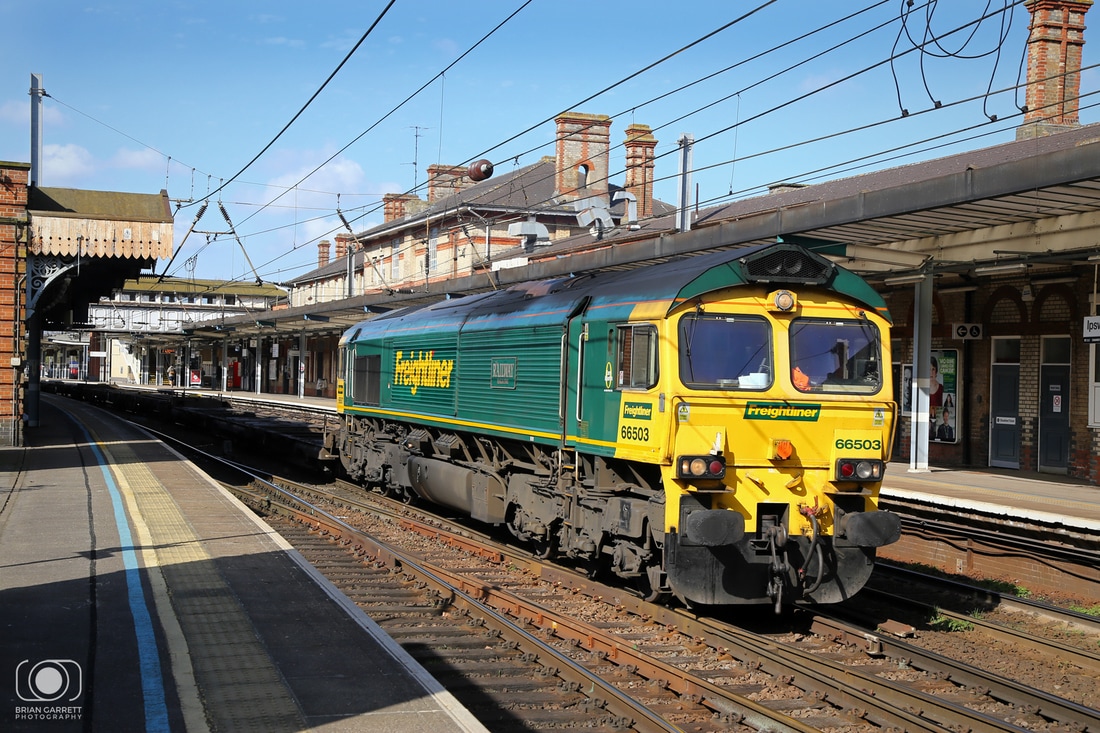 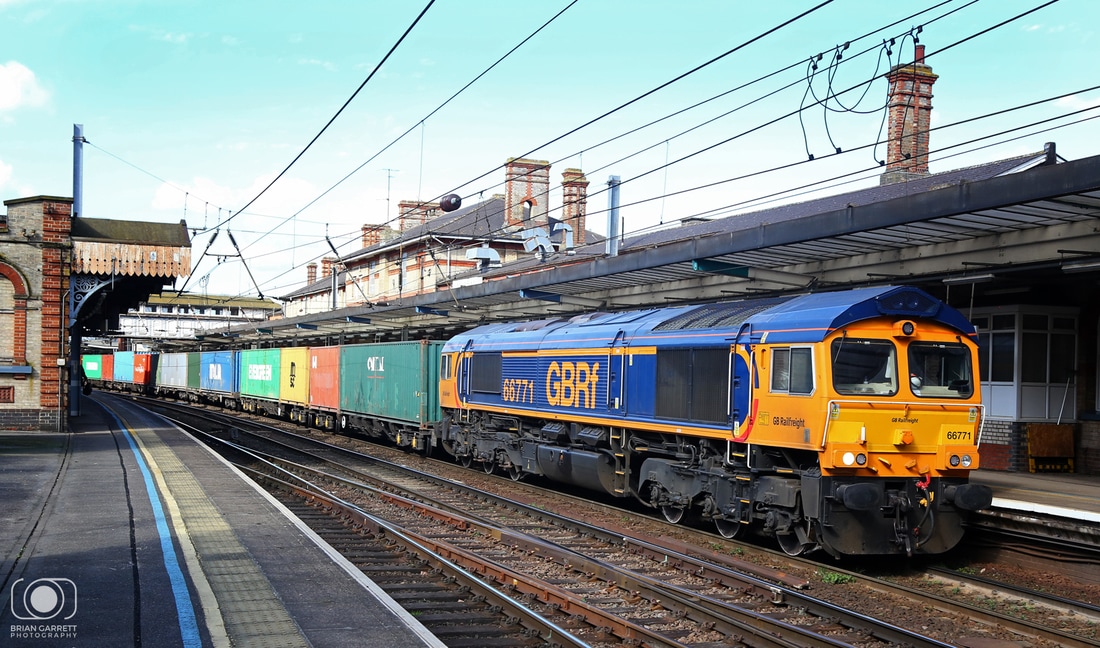 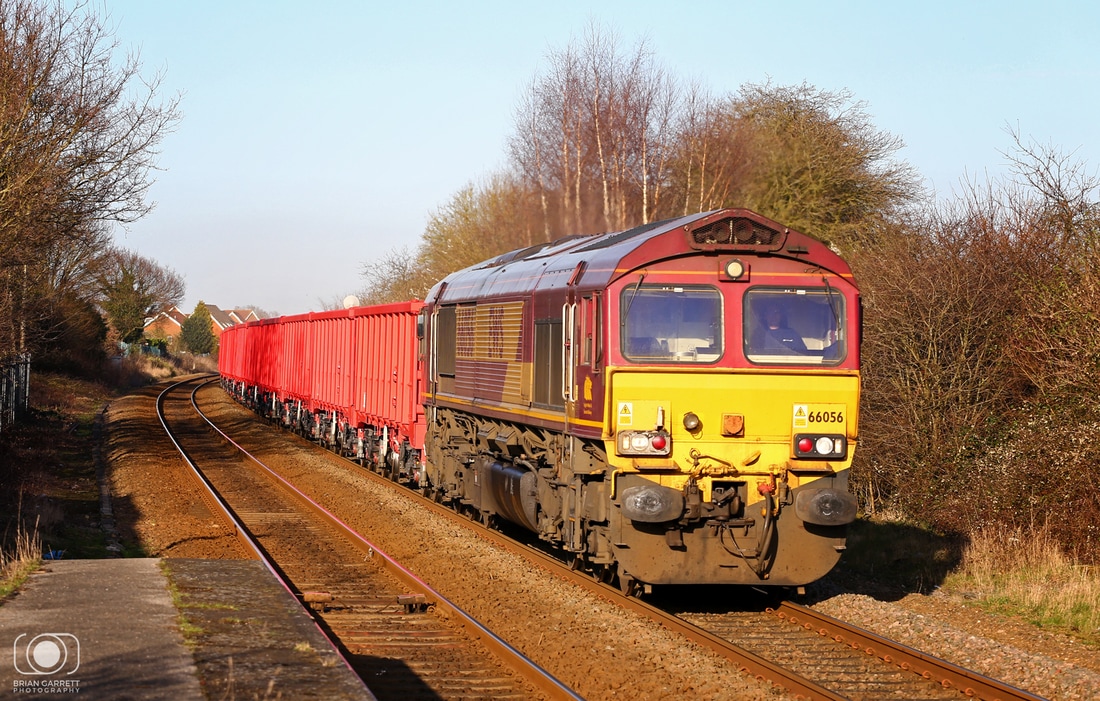 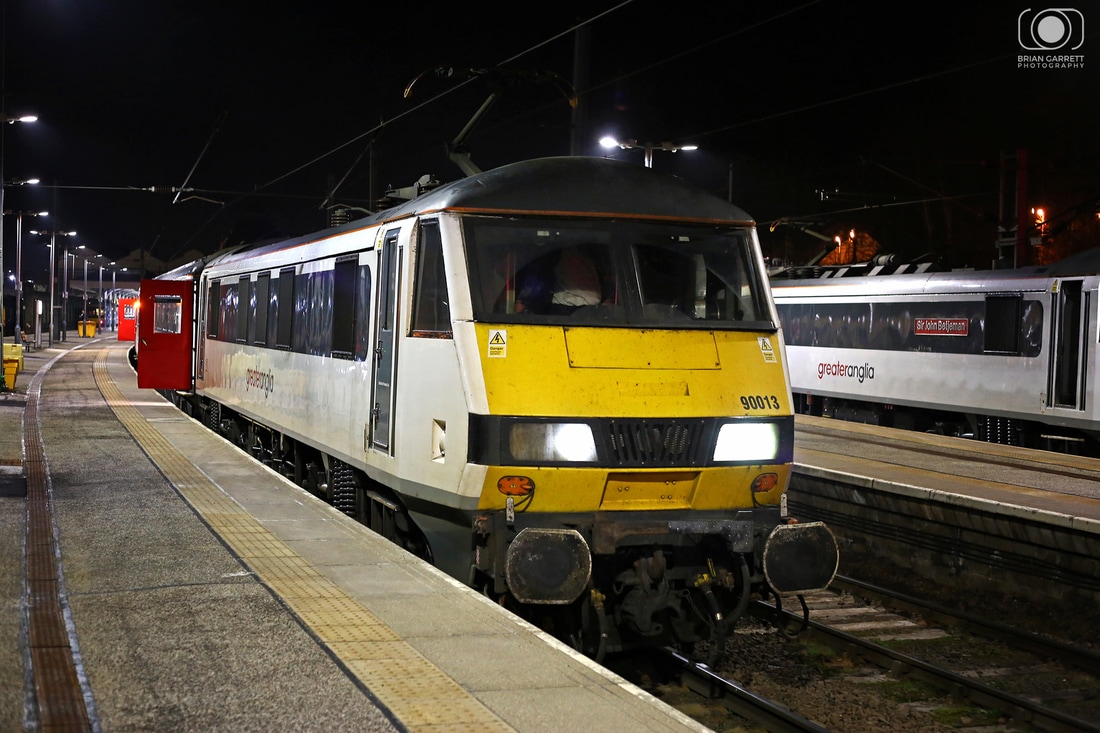 The 16th March was out final full day in East Anglia so we decided the morning period we would visit the small village of Trimley located just outside the huge port of Felixstowe. Trimley has an hourly Class 153 shuttle service which operates between Ipswich and Felixstowe Town. The village of Timley has a small station and a public foot crossing within ten minutes walk of the station, this proved to be a great location to see the constant flow of containers into and out of the port area. 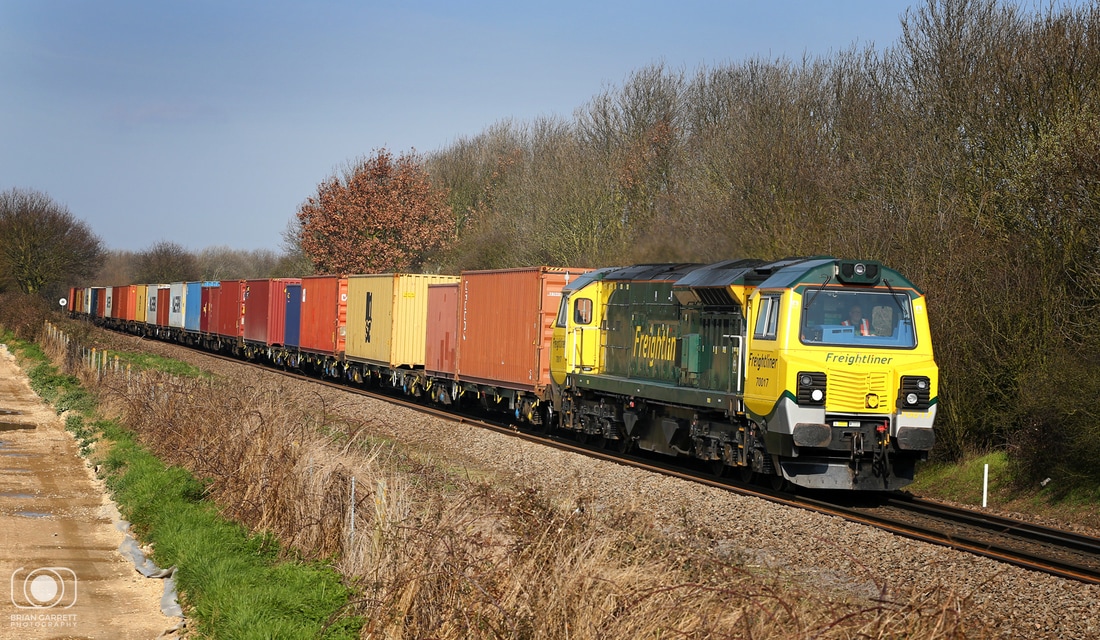 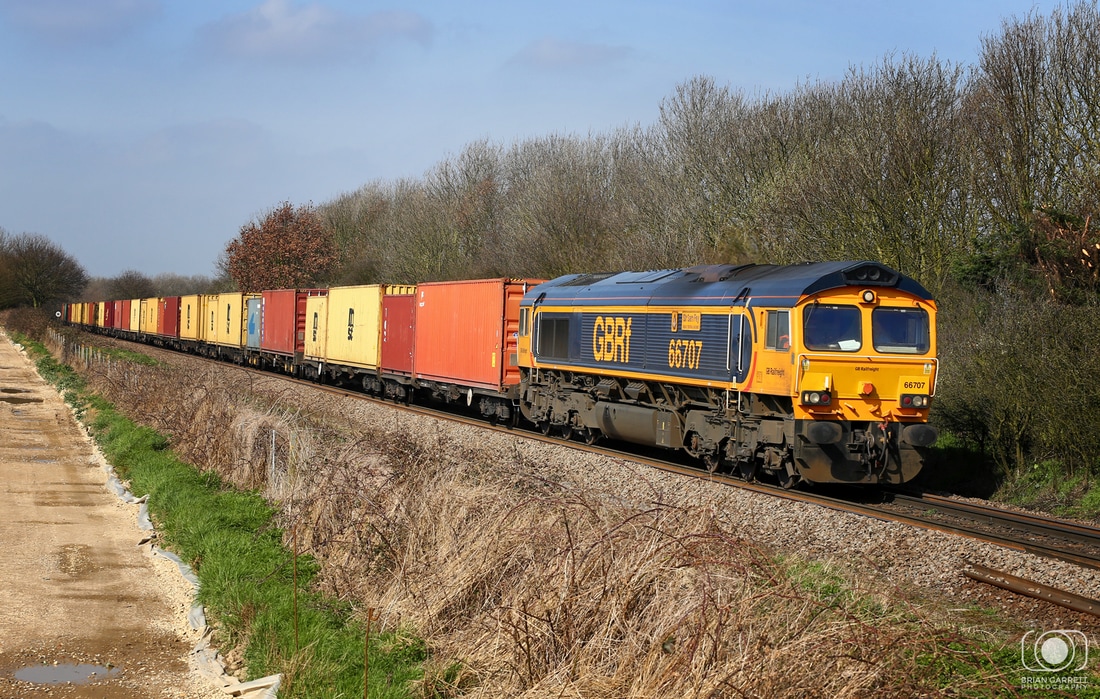 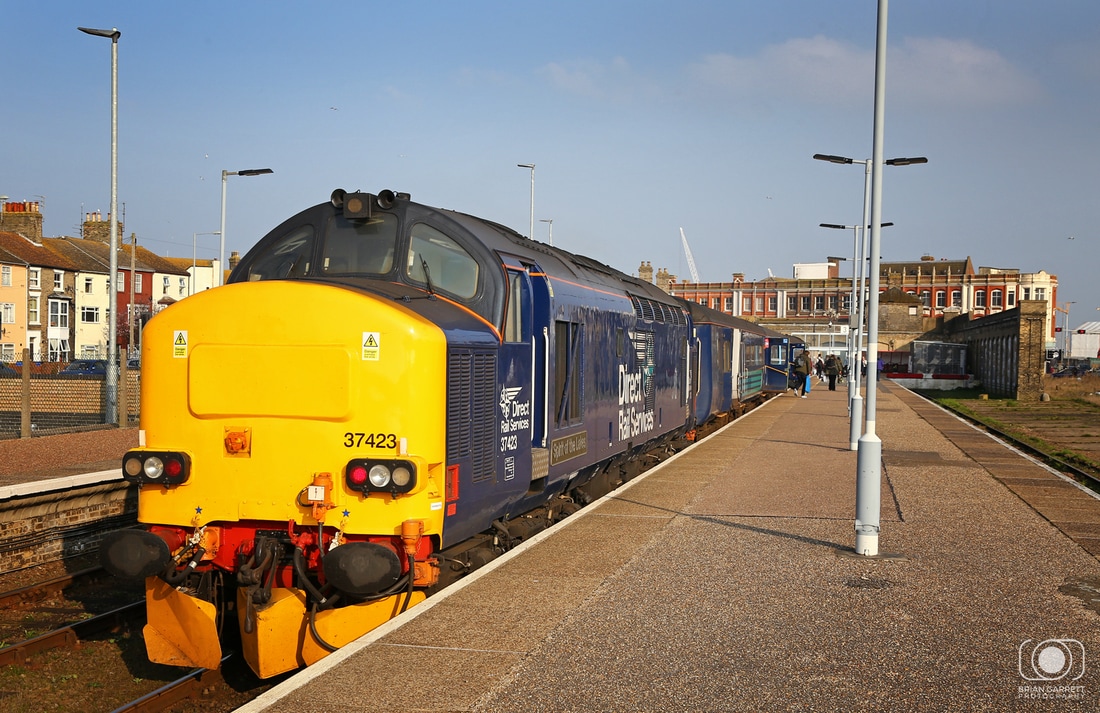 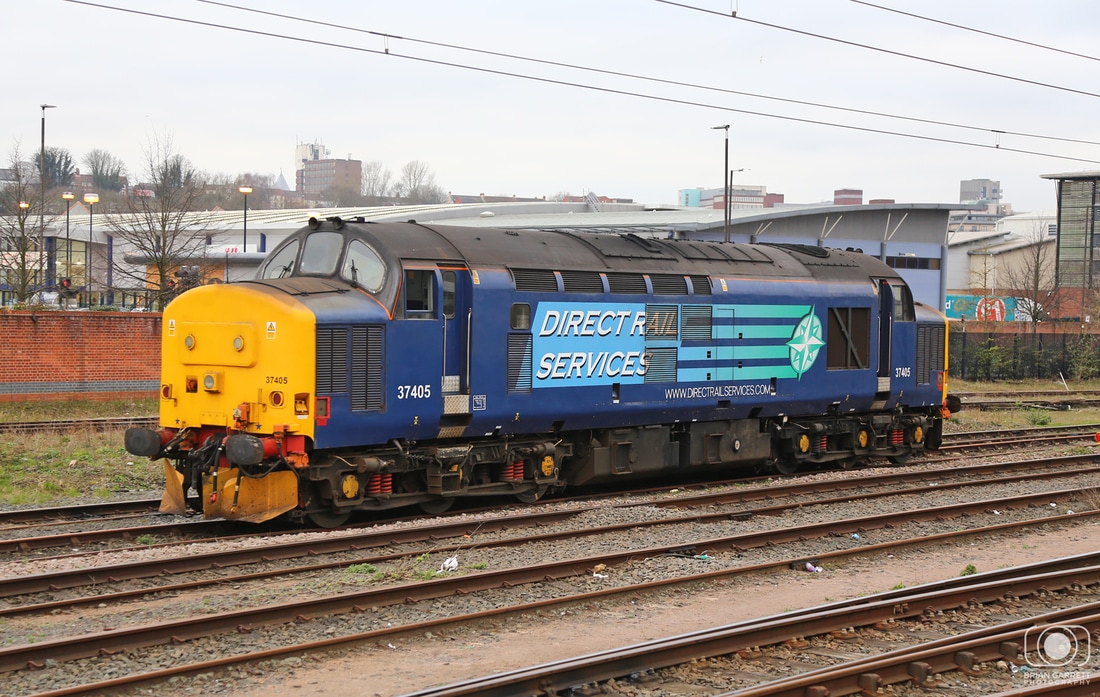 DRS Class 37/4 No.37405 stands at Norwich having just completed a test run to Lowestoft and back light engine.

On the 17th March 2017 Freightliner caused delays to mainline passenger services in East Anglia when Class 70 No.70019 failed near Marks Tey just before the morning rush hour while working the 4L95 22:50 Ditton - Felixstowe freightliner. Spare Class 70 No.70017 was dispatched from Ipswich Stabling Sidings to collect the stricken train, and finally hauled it into Ipswich Station at 11:03 161 minutes late. Several morning services to Norwich were delayed by the same amount of time as they were stuck behind the freight service with no way of passing.