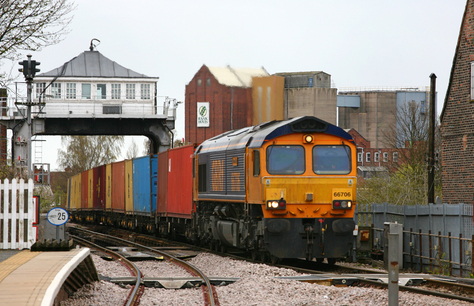 The Lincolnshire and Yorkshire ‘Road Trip’ was planned as part of a hasty replacement for a trip to America in 2012. Unfortunately we had to postpone this overseas trip, but replaced it with two trips in April to compensate for not being able to go abroad.  From Taunton we planned to head North (via a stop off at Ashchurch (near Cheltenham) and Portway (in the Midlands) then heading on to Barnetby (in Lincolnshire).
At Barnetby we would spent two days in the area photographing the busy freight scenes on the mainline to and from Immingham. On Wednesday 4th April we then moved north east towards York where we would cover the various maze of freight lines connecting to Drax, Eggborough, and Ferrybridge power stations. On Friday 6th April we returned South (via Clay Cross near Chesterfield). In both locations coal is the major commodity being hauled by all of the train operating companies, such is the need to provide these large power stations with a constant source of fuel to burn. However there were also some other Freightliner, Steel and Aggregate flows which operate through these areas to other locations.

Conditions for the first day of the trip were favorable. With full sun forecast for the morning we made a stop at Ashchurch - (North of Cheltenham). Unfortunately not all of the booked freight appeared in the window we had planned to cover. A move of to Portway - (Elford Loop, near Tamworth) provided more traffic but an increase in cloud, as the deterioration of weather continued to head South over the country as we headed North. Merry Lees - (Coalville Branch near Leicester) was a last minute addition to our route, given the rare traction involved it was clear decision to head East to try and capture a photograph of the London Underground Tube Stock delivery. Arrival in Barnetby - (Lincolnshire) was late in the day, with drizzle setting in, which would dictate the conditions for the next few days. 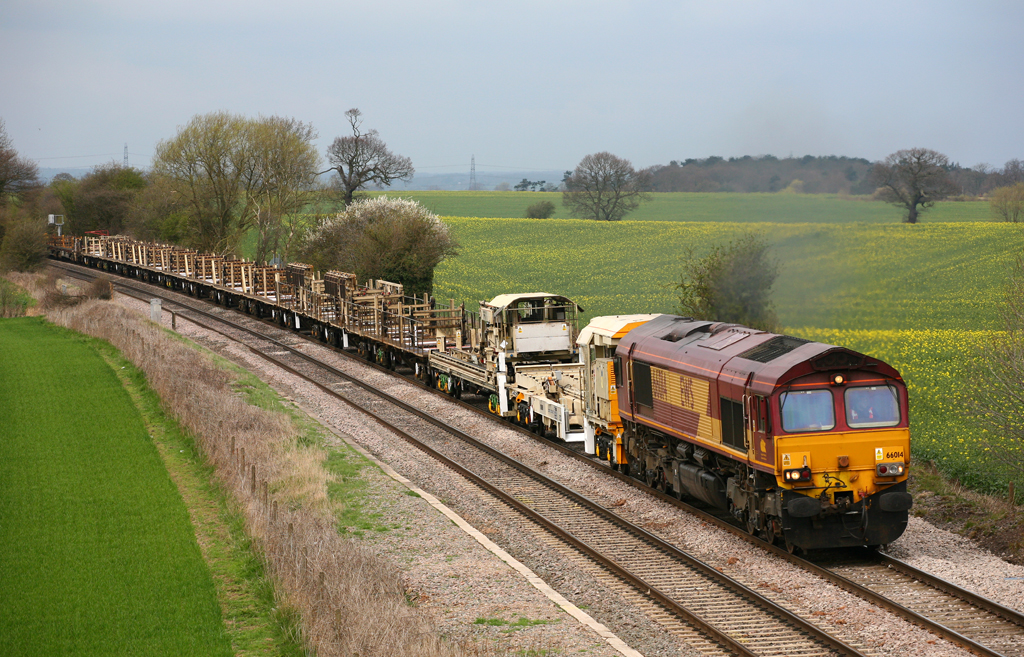 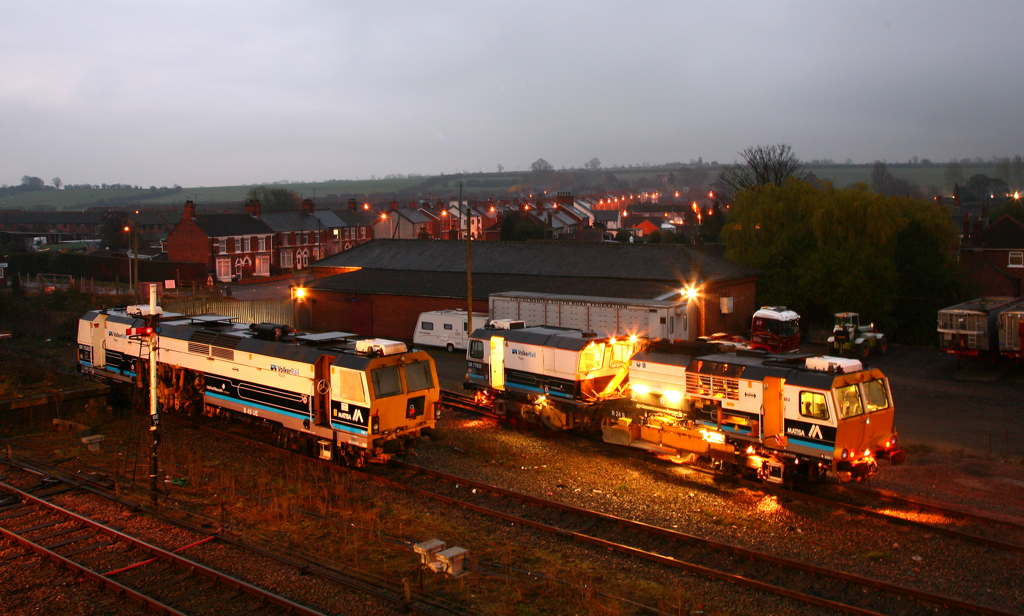 The scene at Barnetby upon arrival. DR77802 & DR77303 stand in the sidings adjacent to the station, as the weather slowly begins to get worse for the day ahead.

The 3rd April dawned with darkened skies and cold weather but patches of brightness were trying to burn through the the weak cloud at times. Knabbs Bridge - New Barnetby was our first location for the day, followed by Brockelsby where conditions worsened to heavy rain, New Barnetby (Footbridge) and finally a dash for cover at Barnetnby Station as conditions worsened for a wild night of weather ahead. 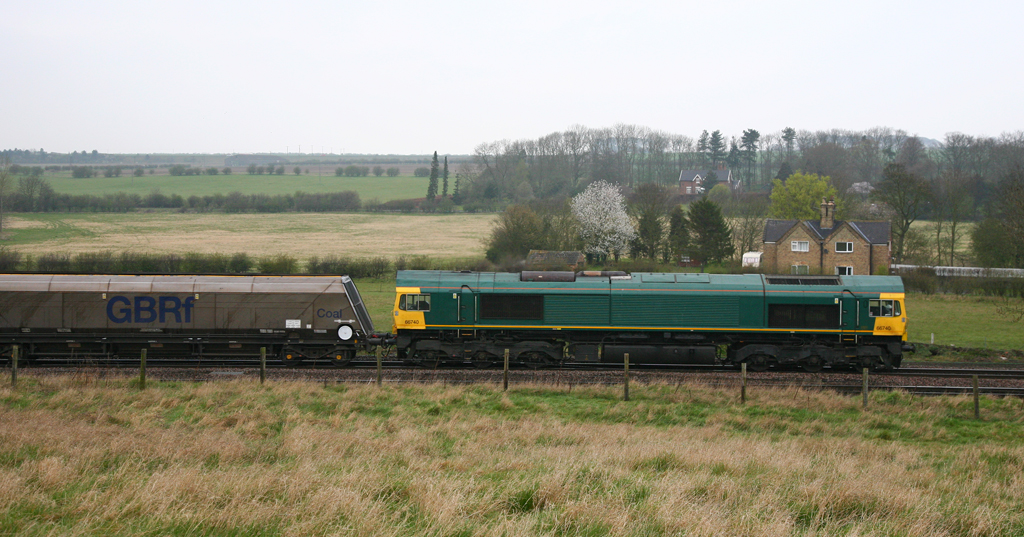 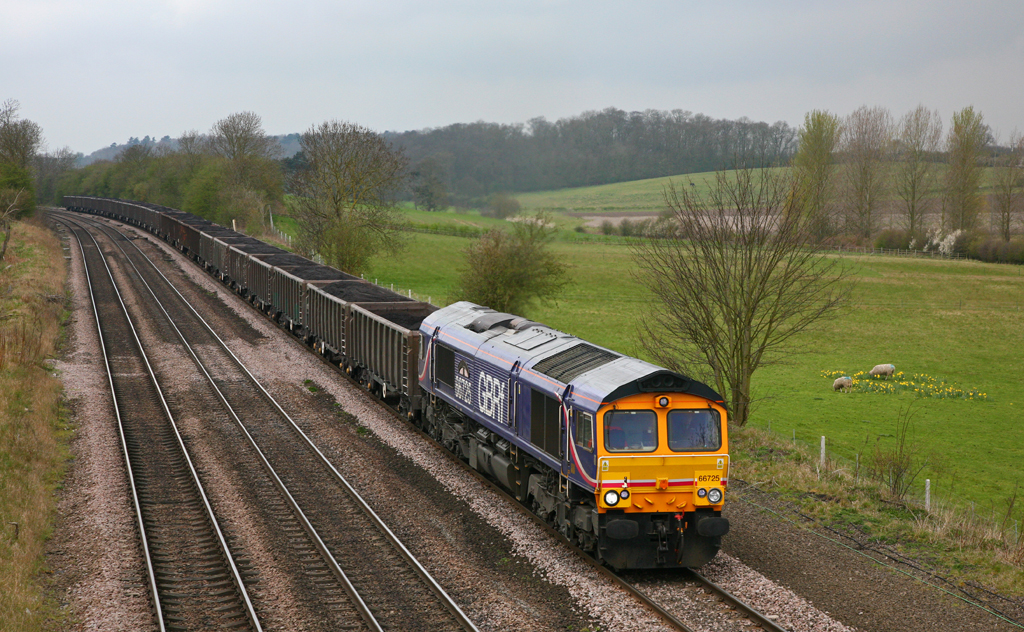 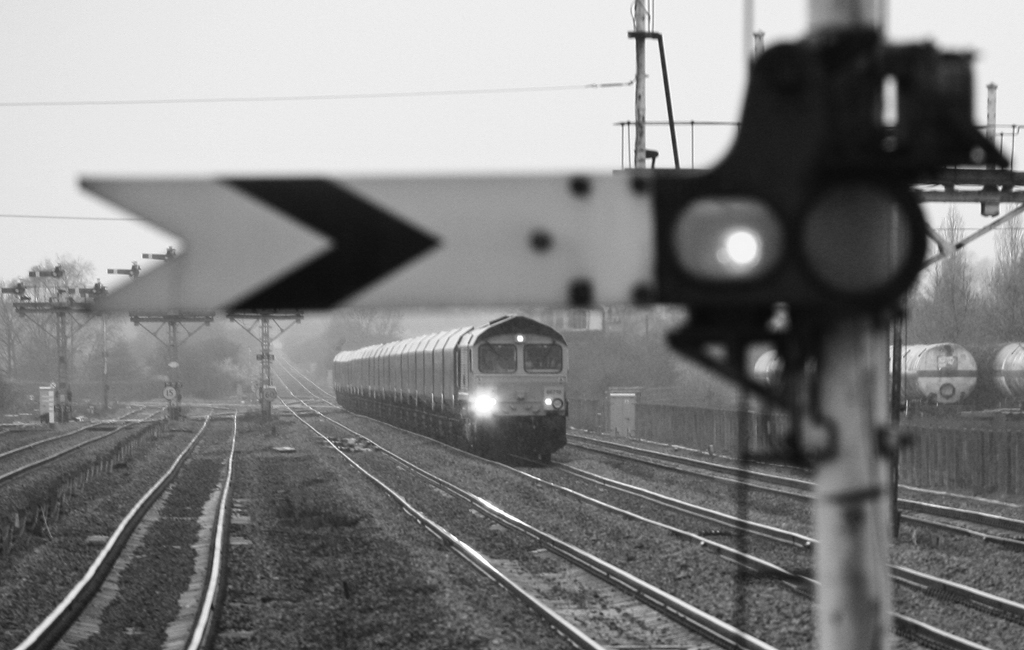 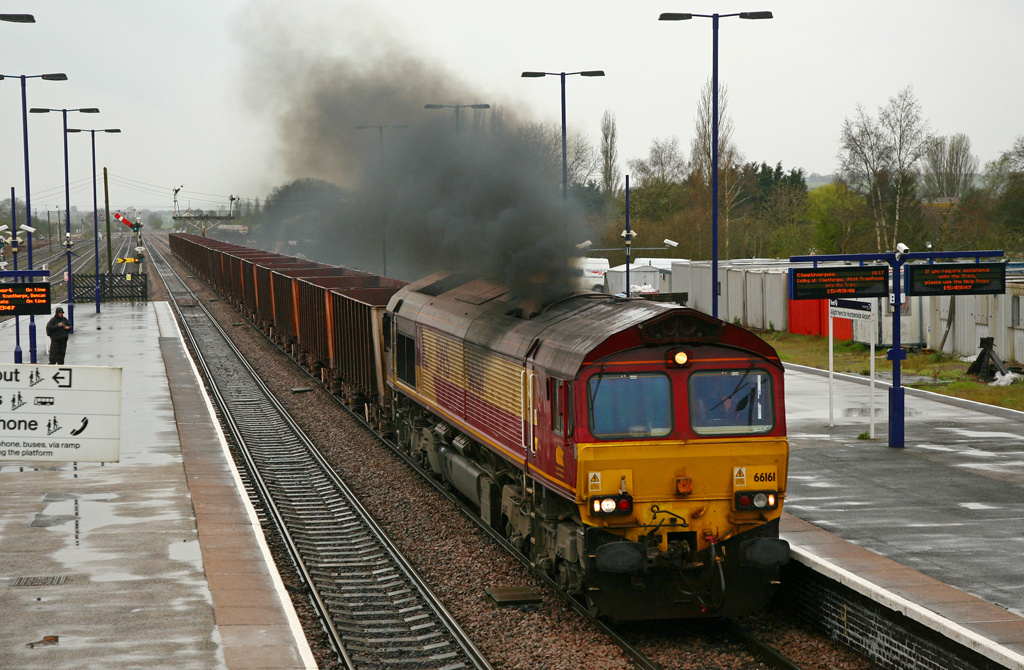 Clearly developing further smoking issues, 66161's exhaust got worse for every climb of Barnetby Bank. It's seen here working the empty 6K25 15:14 from Santon to Immingham through Barnetby.

After a wild night of wind and rain, the situation on the morning of the 4th April couldn't of been any worse. The weather forecast said rain should stop by mid day with a break in the weather coming towards early evening. The decision was taken to begin driving West towards our eventual location of York. Our first calling points were Hatfield and Stainforth station following by a couple of hours at Selby before moving on to Knottingley and Colton Junction. Selby came as a complete surprise, we only really went there to keep warm and have a cup of coffee. The restored station, Railway Cafe, Selby Abbey, and Swing Bridge  provided a unique backdrop where we managed to record three booked freight trains. 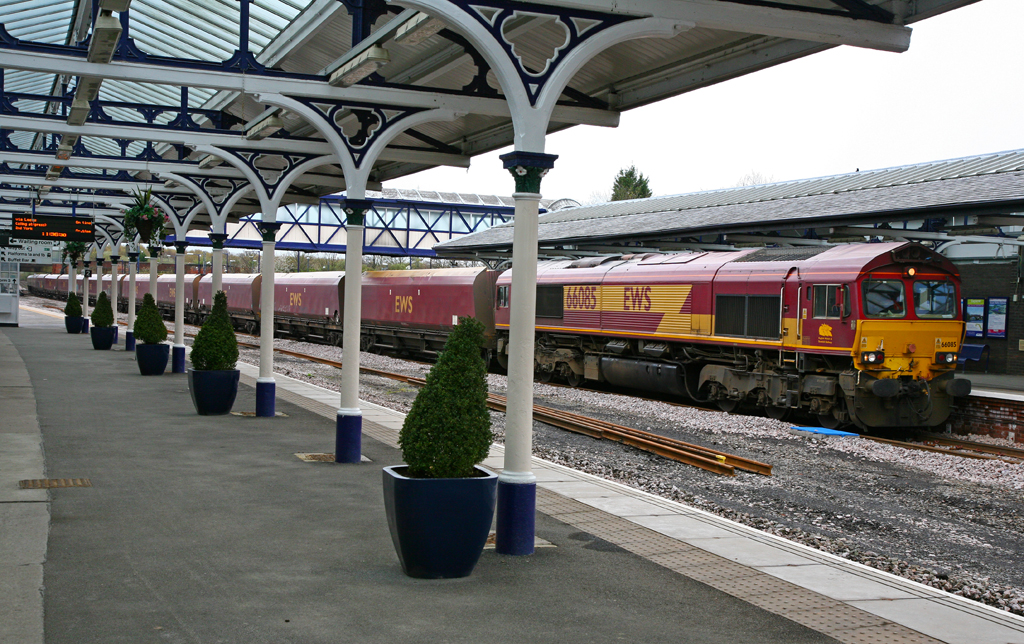 Passing through the delightful station at Selby 66085 hauls the 4D52 09:45 Drax - Hull through the station complex onto the swing bridge. 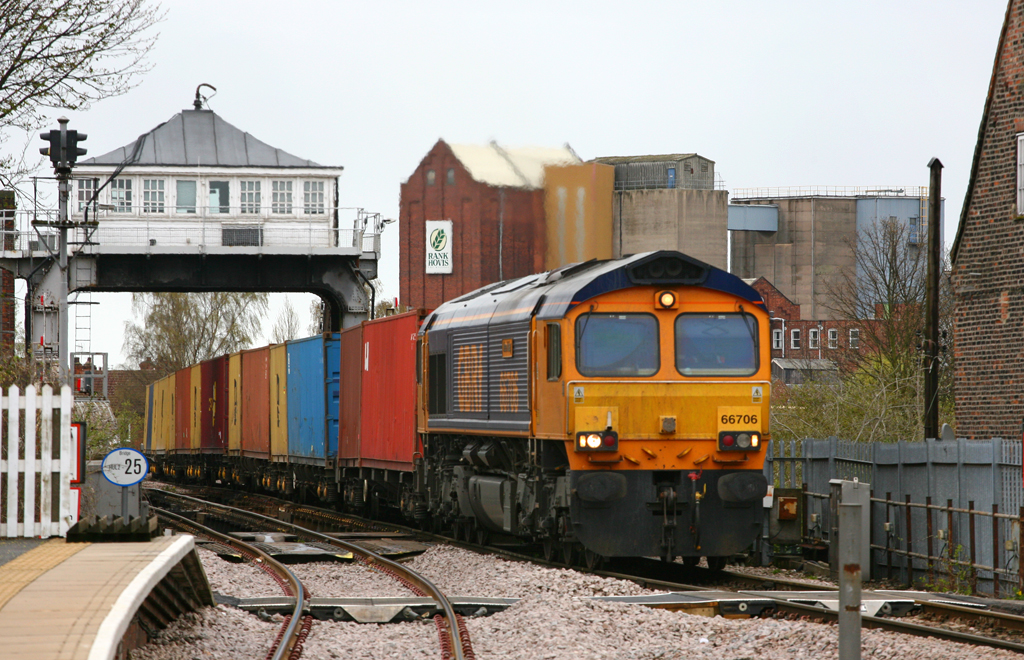 GBRF Class 66 No.66706 rolls slowly over the swing bridge into Selby Station with the 4L78 11:43 Selby - Felixstowe freightliner. 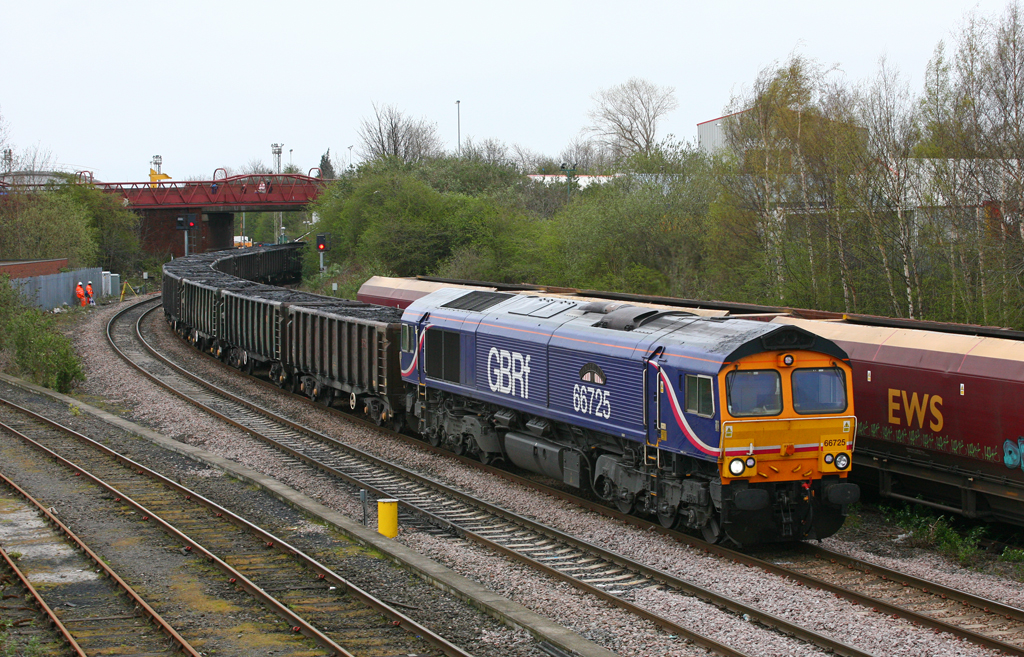 GBRf Class 66 No.66725 still carries First 'Barbie' livery. Having already photographed this loco the previous day in Barnetby we were unaware this loco would become our 'nemesis' for the trip. The 6N50 09:30 Maltby - Tyne Yard rounds the curve at Knottingley. 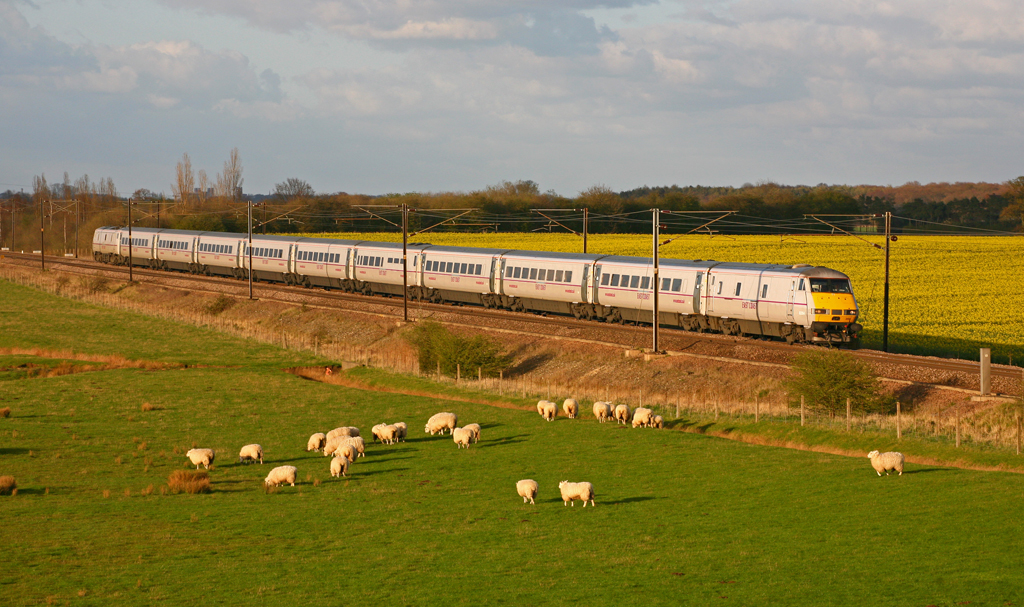 After years of Blue on the ECML, Silver is the new colour of the day. Under clearing skies DVT 82204 races South at Colton Junction with 91131 pushing the 1Y47 17:25 Newcastle - Kings Cross service. 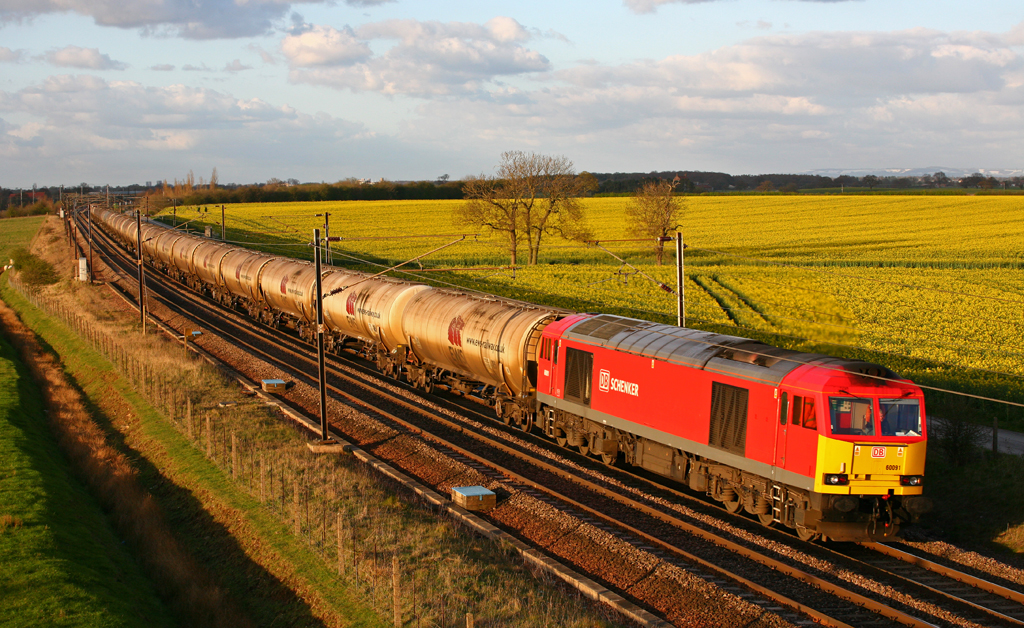 I never would of imagined this shot would of been possible when we awoke the same day in wind, rail and freezing temperatures. Still with a cold wind blowing but clearing skies, DB 60091 rumbles through Colton Junction with the 6D43 14:41 Jarrow - Lindsey fuel empties.

After an overnight stay in York, the weather couldn't of been any better waking up to cloudless skies and bright sunshine. The day was equally special because it was Maunday Thursday and The Queen was due to visit York using the Royal Train. Our Thursday saw us take in various photographic locations in the Colton Junction, Bolton Percy and Milford areas, making the most of the good weather. 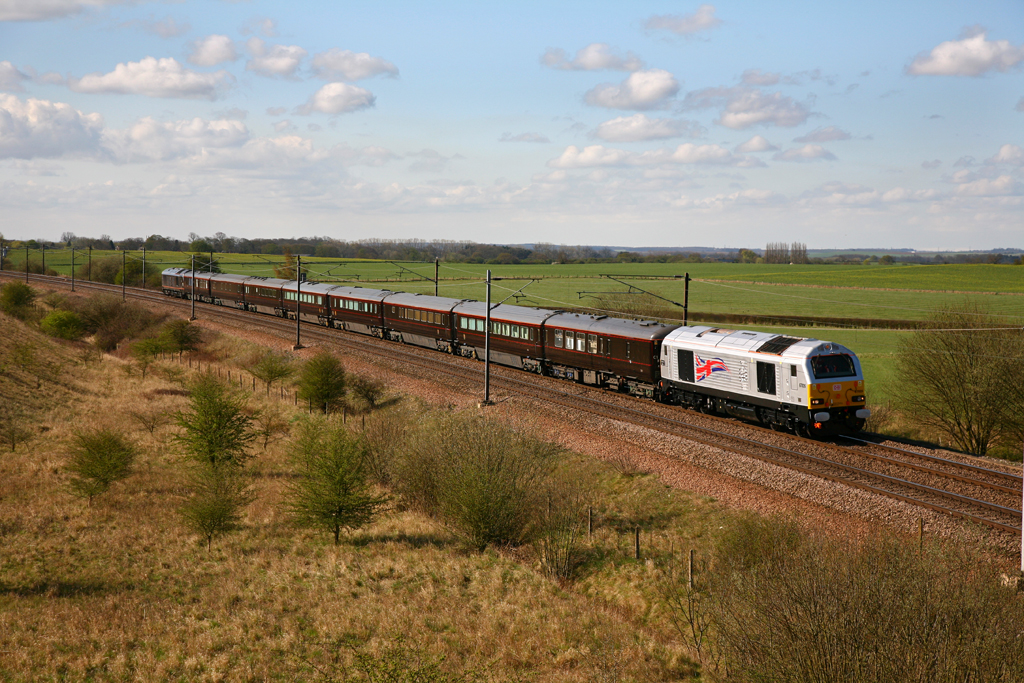 It's not every day you get to photograh the Royal Train, let alone in good light with the latest Royal Loco. 67026 delivers The Queen and members of the Royal Family to York for the Maunday Thursday service at York Minster, seen passing Colton Junction. 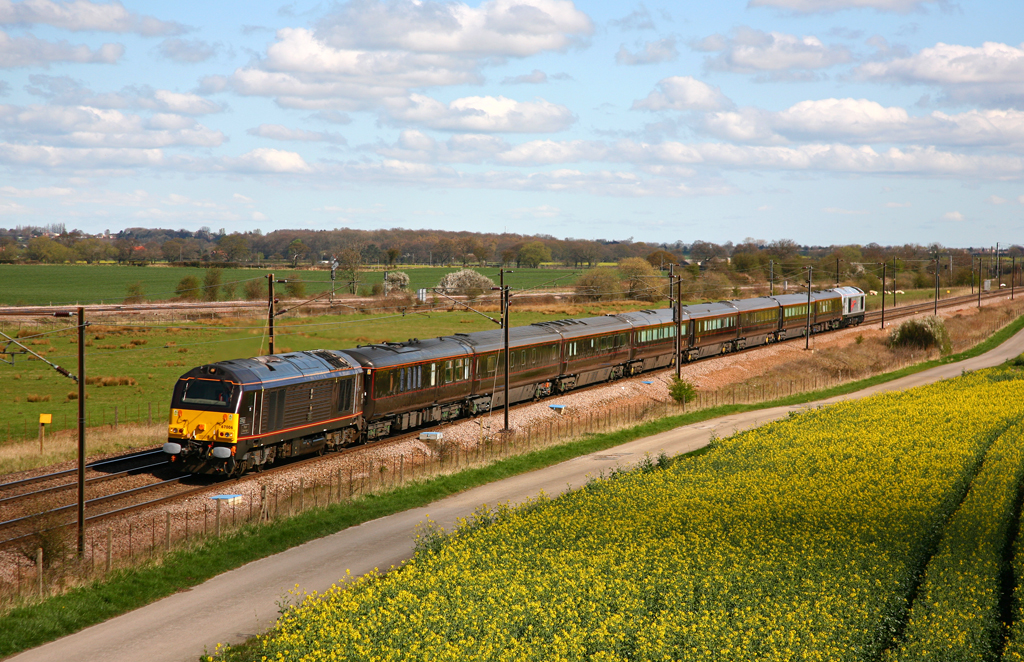 Having delivered The Queen to York, traditional Royal loco 67006 leads the Royal Train back to Wolverton Works. 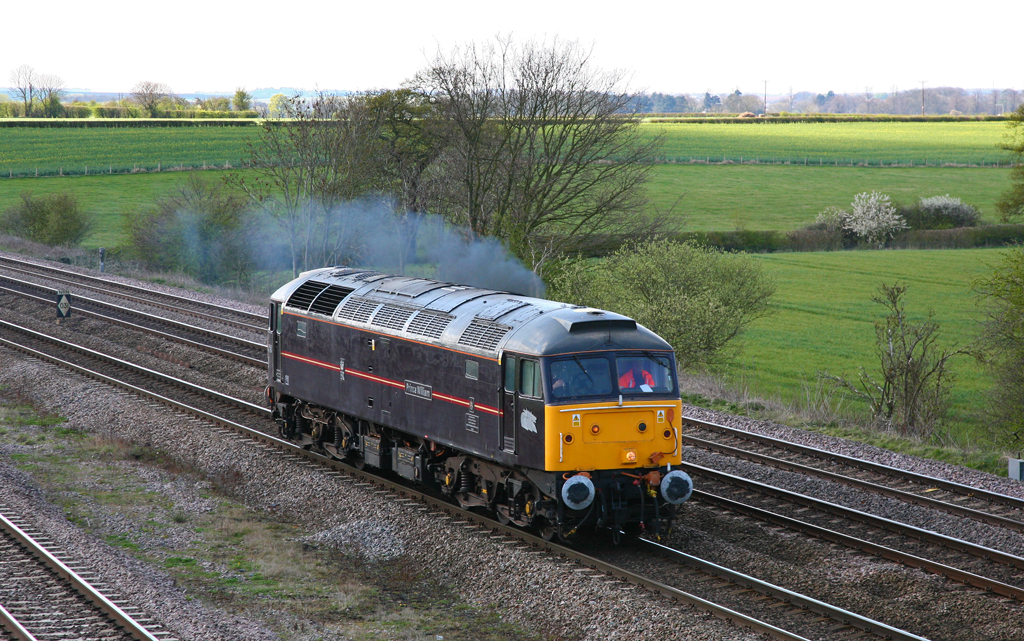 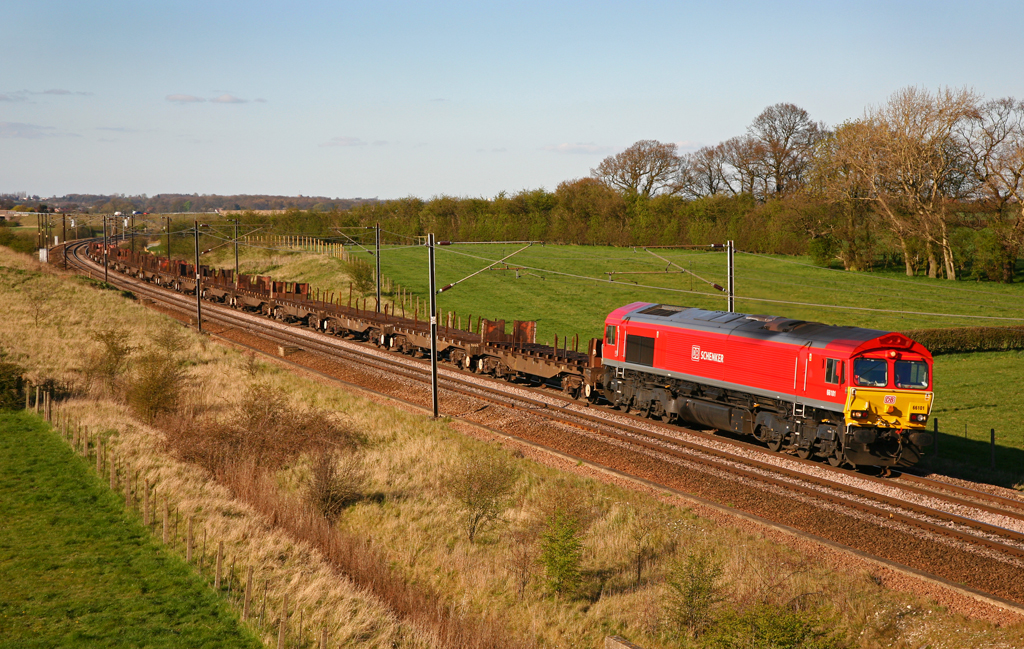 For the second night in a tow, DB Schenker Class 66 No.66101 passes Bridge 33 near Colton Junction working the 6D11 Lackenby - Scunthorpe steel empties. 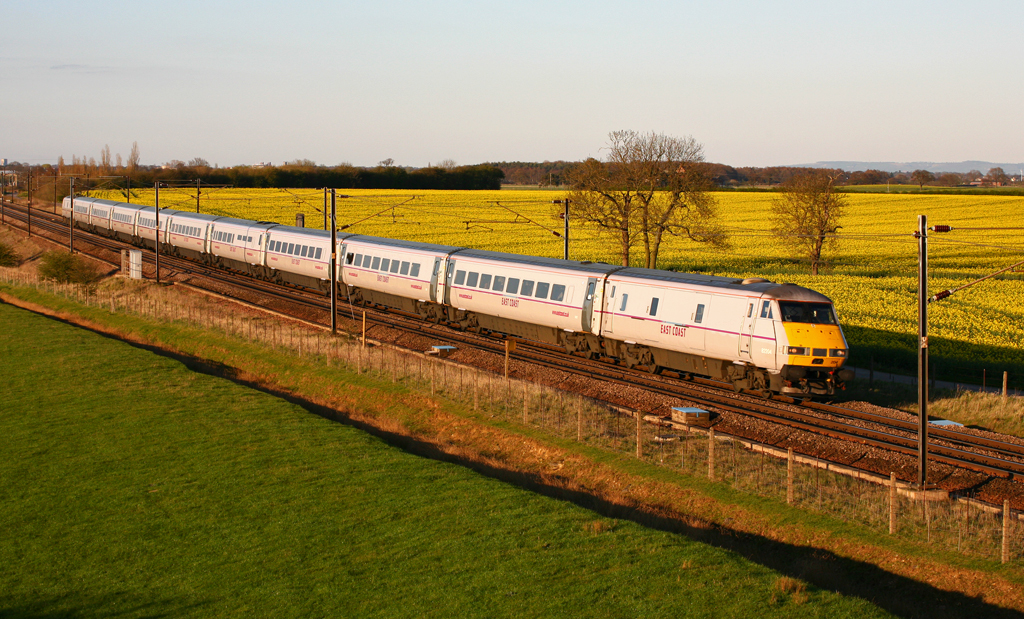 The 6th April was the final day of our week long tour of the North East. After a short period at Colton Junction we headed South to Clay Cross near Chesterfield before a final long drive back home. 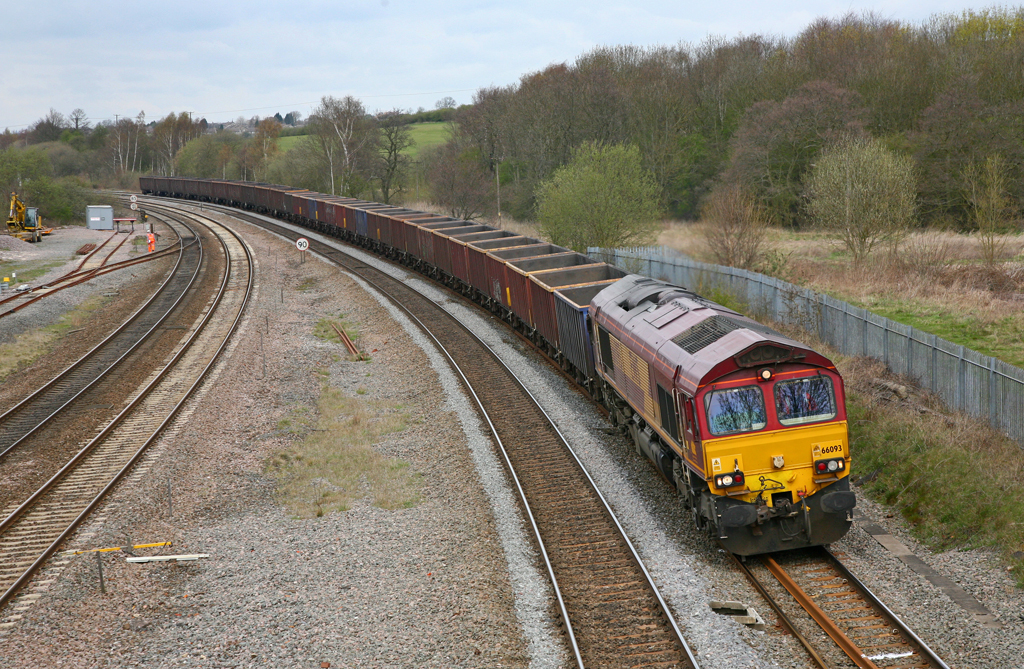