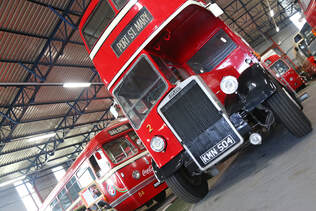 The Jurby Transport Museum is a transport museum in Jurby on the Isle of Man occupying a former aircraft hangar. The museum is operated by a group of volunteers who are members of the Manx Transport Trust. Entrance is free but donations are welcome and go towards the running of the museum and ongoing restoration of the Manx Heritage Vehicles which the museum volunteers care fore, restore and operate. The museum opened in 2010 and has welcomed over 30,000 visitors since then. The museum has a shop which located adjacent to the former Douglas Bay Horse Tramway tram number 22. Also available is hot and cold drinks, snacks and refreshments. Car parking is available on site. The museum is open every weekend and Bank Holidays during the Summer and Sunday and Bank Holidays during the winter. The Jurby Transport Museum is located in Hangar 230 on the Jurby Industrial Estate. It is served by Bus Vannin services 17, 18 and 19. 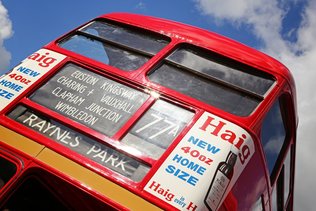 The 5th Taunton Heritage Bus Running day in Taunton held on the 14th May 2017 resulted in the biggest gathering of buses and visitors to the event yet. The market town of Taunton is well suited to an event of this size, and photographically the towns buildings, and local countryside provide an excellent backdrop to record these former work horses providing pleasure rides for the general public. Several improvements to the 2017 event were added, these were mainly health and safety related. Viewing from the Bus Station was from behind designated barriers as in previous years crowds ambling around the Bus Station parking area had become a concern for the drivers and volunteers trying maneuver buses in and out of parking spaces. More double deck buses were provided for the Bishops Lydeard, Wellington and Town Circular routes to provide more capacity on these routes. Buses to and from Wellington also called at Sheppys Cider in both directions allowing passengers to alight and enjoy some light refreshments before continuing their journey. 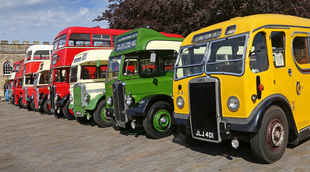 Sunday 8th May the sun was out for the 4th Annual Taunton Heritage Bus Running Day, an event which has grown year on year since it was first conceived in 2012. The 2016 event provided between 45 an 50 buses, local trade stands, bus related sales stalls, a collection of Heritage Cars (located in Goodlands Gardens), Somerset Museum was also open to the public featuring a display of model trams. The buses operated routes to Wellington, Monkton Heathfield, Corfe, Stoke St Mary and also provided a 'town circular' giving free rides to the general public and enthusiasts. The Wellington route also provided a stop at Sheppys Cider, which had opened especially for the event to allow passengers a stop for refreshments and local produce. 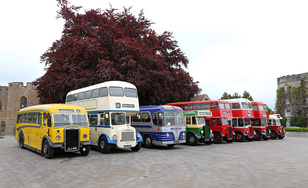 Sunday May 10th 2015, saw the third annual  Heritage Bus Running Day in Taunton. After the success of the 2013 and 2014 events, the 2015 even was expanded further to include more bus routes, a classic car display in Goodlands Gardens, and local craft/ cake sales located in Castle Green. A large amount of historic vehicles attended Castle Green/ Taunton Bus Station to provide free rides to members of the public, like minded bus enthusiasts, owners, and volunteers. The event was further enhanced by First 'Buses for Somerset' allowing the use of Taunton Bus Station to park buses alongside their own modern and colourful county fleet, and with First 'Buses for Somerset' also providing access to the Hamilton Road Bus Garage which was also opened to the public to have a look at how the modern bus fleets are maintained. 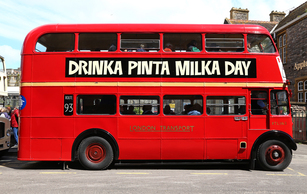 Sunday May 11th 2014, saw the second Heritage Bus Running Day in Taunton. After the success of the 2013 event a large amount of historic vehicles attended Castle Green/ Taunton Bus Station to provide free rides to members of the public, like minded bus enthusiasts, owners, and volunteers. The event was further enhanced by First 'Busses for Somerset' allowing the use of Taunton Bus Station to park buses alongside their own modern and colourful county fleet. 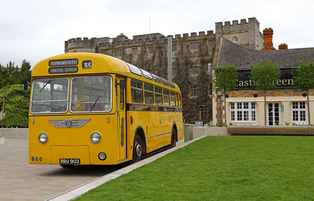 May 13th 2013 saw Taunton hold it's first Heritage Bus Running Day based at Castle Green & Taunton Bus Station. Previous events have been held in Taunton, but these were operated from Quantock Heritage's own base at Bishops Lydead. The location rather limited the amount of people who could enjoy the event. Regular bus rally's are held in Bristol, Torquay, Weston-super-Mare and Exeter but Taunton has always been the missing gap. The use of the newly resorted Castle Green complex and Taunton Bus Station opened the event up to a much wider audience. The backdrops of Taunton Castle, Taunton Museum and original stone buildings really set the scene for some superb images.