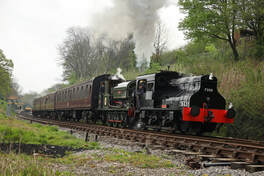 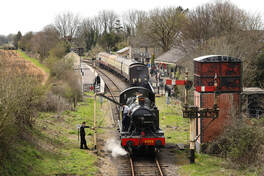 The East Somerset Railway is located at Cranmore Station and runs for a couple miles. The railway is best known for its association with famous painter David Shepperd who had two of his locomotives based at the line.  BR 9F No.92203 'Black Prince' and 4MT No.75029 'The Green Knight'. The line has a small branchline feel and and operates a small fleet of locomotives as well as taking on sub contract restorations of locomotives for other steam railways. The railway is also home to The Sentinel Diesel Group who look after a small fleet of former industrial locomotives. 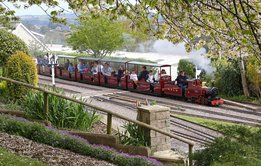 The Beer Heights Light Railway is a Narrow Gauge Steam Railway located at the small fishing village of Beer (near Seaton) first opened in 1975. The railway exists as part of the Pecorama exhibition centre and operates 1 mile of 7¼ inch (184 mm) track. The hillside location offers stunning views of the Devon coastline and has plenty to keep children, and adults entertained for hours. The route starts off through the formal gardens, includes many bridges, extensive sidings and a lengthy tunnel. Following this, the train seems to go out into the countryside and passes the new Deepwater station. Here passengers may choose to alight to enjoy the tranquility of Lake Charlotte, the beautiful wildlife pond in Wildway Park, where there is also a nature walk and fitness trail. The train then passes a branch line which zig-zags down very steep gradients to the Beer Mine. ​ 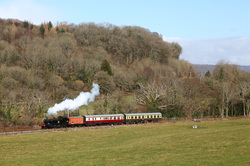 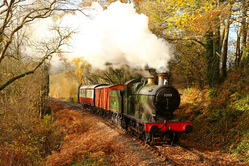 The 'Collett in Devon' photographic charter took place on the 8th December 2014, at the South Devon Railway and was organised by Timeline Events. The charter originally intended to used recently overhauled Pannier Tank No.6412, however slower than planned progress with the overhaul at Buckfastleigh meant the loco was not in traffic. Instead BR 0-6-0 Collet was offered as a replacement. The day saw three different formations used for three parts of the photographic shoot. For the morning two bauxite brown box vans and a single collett Coach were provided, in the afternoon the train was reformed into a small mixed freight train, and after dark the box vans and collett coach were reformed for a night shoot at Staverton Station. 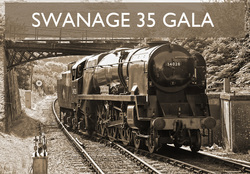 The Swanage Railway held a mixed traffic gala to celebrate their 35th Anniversary of preserved operation. The line from Wareham to Swanage was closed by British Rail in January 1972 and the track had all been lifted by September of the same year. After much support from the residents of Swanage, where 83% of the town voted rebuild the railway in a referendum, access to the station buildings in Swanage was granted by 1976. By August 1979 the track had been relaid and the first heritage passenger trains were running again. Since 1979 the line has continued on its journey to recovery and expansion, by September 2014 its hoped passenger services will again be running to Wareham Station 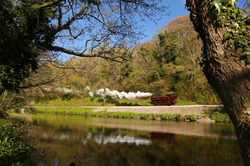 The South Devon Railway held a 'Easter Heritage Gala' over the 2014 Easter weekend, which included both steam and diesel traction, and was themed as 'Delivering the Goods'. The line had one visiting steam locomotive in the shape of LMS 2-6-0 2MT No.46521, another recent arrival to the line was Class 37 No.37275 which will was transferred from Barrow Hill in a deal to exchange it with Class 20 D8110.
Many different freight trains were formed up during the operating weekend which gave a nice touch of 'imagination' from the SDR management, something we wouldn't see happen on other preserved lines in the South West. The South Devon offers some fantastic views alongside the River Dart as the line meanders between Totnes and Buckfastleigh. 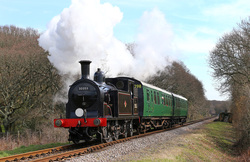 Saturday 15th & 16th saw The Swanage Railway held a small steam gala featuring two locomotives from the 'LWSR' era. The gala was organised to coincide with the return to traffic of two restored Maunsell coaches which had been under long term restoration for nearly ten years. M7 No.30053 & visiting T9 No.30120 provided a two train service throughout the weekend, although injector problems on the T9 during Saturday afternoon resulted in BR Blue Class 33 Diesel No.33202 called upon to substitute. The weekend was blessed with superb weather with a real feeling of Spring in the air after such a terrible Winter of rain, wind and floods. 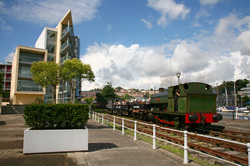 The Bristol Harbourside Steam Railway is operated in selective dates in the Summer in conjunction with M Shed, Bristol. The short length of line is part of the former extensive dockside complex where goods were bought into Bristol by ship and then transferred to rail. At the time of our visit only Peckett No.1940 'Henbury' was in traffic. The locomotive was used to provide trips along the harbourside to the SS Great Britain and also alongside Cumberland Road to Create Centre.

The South Devon Railway held their Cambrian Easter Gala Weekend between Friday 22nd April 2011 through to Monday 25th April, taking advantage of the Bank Holiday. Despite a small period of rain on the Friday morning the country branch-line was blessed with some of the hottest weather of the year so far. The gala attracted steam enthusiasts, keen to see the visiting 'Dukedog' from the Bluebell Railway, and families out to enjoy the long weekend. Photos in this gallery feature events from Friday 22nd April.